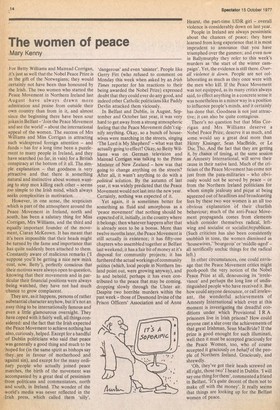 The women of peace

For Betty Williams and Mairead Corrigan, it's just as well that the Nobel Peace Prize is in the gift of the Norwegians; they would certainly not have been thus honoured by the Irish. The two women who started the Peace Movement in Northern Ireland last August have always drawn more admiration and praise from outside their own country than from in it, and almost since the beginning there have been sour jokes in Belfast— 'Join the Peace Movement and see the world' — about the international appeal of the women. The success of Mrs Williams and Miss Corrigan in attracting such widespread foreign attention — and funds — has for a long time been a puzzlement to many people in Ireland, and they have searched (so far, in vain) for a British conspiracy at the bottom of it all. The simple explanation — that goodness is very attractive and that there is something natural and instinctive about women wanting to stop men killing each other — seems too simple to the Irish mind, which always seeks complexities in motivation.

However, in one sense, the scepticism which is part of the atmosphere around the Peace Movement in Ireland, north and south, has been a salutary thing for Miss Corrigan, Mrs Williams, and the third and equally important founder of the movement, Ciaran McKeown. It has meant that it's been impossible that their heads might be turned by the fame and importance that has quite suddenly been attached to them. Constantly aware of malicious remarks (`I suppose you'll be getting a nice new mink coat, now, Betty"), perfectly conscious that their motives were always open to question, knowing that their movements and in par ticular their financial positions were always .being watched, they have not had much .chance to grow complacent.

They are, as it happens, persons of rather substantial character anyhow, but it's not an easy thing to be internationally famous and even a little glamourous overnight. They have coped with it fairly well, all things con sidered: and the fact that the Irish expected the Peace Movement to achieve nothing has also, curiously, helped. Except for a handful of Dublin politicians who said that peace was generally a good thing and much to be hoped for (in the same spirit as bishops say they are in favour of motherhood and against sin), and except for the many ordinary people who actually joined peace marches, the birth of the movement was accompanied by a great deal of pessimism from politicans and commentators, north and south, in Ireland. The wonder of the world's media was never reflected in the -Irish press, which called them 'silly', 'dangerous' and even 'sinister'. People like Gerry Fitt (who refused to comment on Monday this week when asked by an Irish Times reporter for his reactions to their being awarded the Nobel Prize) expressed doubt that they could ever do any good, and indeed other Catholic politicians like Paddy Devlin attacked them viciously.

In Belfast and Dublin, in August, September and October last year, it was very hard to get away from a strong atmospheric feeling that the Peace Movement didn't signify anything. Okay, so a bunch of housewives were marching in the streets, singing 'The Lord is My Shepherd' — what was that actually going to effect? Okay, so Betty Williams was on German television and Mairead Corrigan was talking to the Prime Minister of New Zealand — how was that going to change anything on the streets? After all, it wasn't anything to do with a political solution, By the autumn of last year, it was widely predicted that the Peace Movement would not last into the new year. Certainly, nothing was expected of it.

Yet again, it is sometimes better for something as fluid and amorphous as a 'peace movement' that nothing should be expected of it, initially, in the country where it belongs; then whatever happens after that is already seen to be a bonus. More than twelve months later, the Peace Movement is still actually in existence; it has fifty-one chapters who assembled together at Belfast last weekend; it has a fair bit of money at it's disposal for community projects; it has furthered the actual workings of community politics (which, local people in Northern Ireland point out, were growing anyway), and lo and behold, perhaps it has even contributed to the peace that may be coming, dropping slowly through the Ulster air. Despite two horrible murders within the past week — those of Desmond Irvine of the Prison Officers' Association and of Anne Hearst, the part-time UDR girl — overall violence is considerably down on last year.

People in Ireland are always pessimistic about the chances of peace; they have learned from long experience that it is most imprudent to announce that you have triumphed over the gunmen; and even now in Ballymurphy they refer to this week's murders as 'the start of the winter campaign'. Yet, the evidence is still there. Overall violence is down. People ar6 not collaborating as much as they once were with the men who kill. If the Peace Movement was not equipped, as its many critics always said, to effect anything in a concrete sense it was nonetheless in a minor way in a position to influence people's minds, and it certainly has done that. Goodness is not just attractive; it can also be quite contagious.

There's no question but that Miss Corrigan and Mrs Williams deserve a Nobel Peace Prize; deserve it as much, and some would say a great deal more than Henry Kissinger, Sean MacBride, or Le Due Tho, And the fact that they are getting it, by chance of timing, at the same session as Amnesty International, will serve their cause in their native land. Much of the criticism of the Peace Movement has come not just from the para-militaries — who obviously would not be served by peace — or from the Northern Ireland politicians for whom simple jealousy and pique at being squeezed out of headlines and broadcasting fees by these two wee women is an all too obvious explanation of their churlish behaviour; much of the anti-Peace Movement propaganda comes from elements which consider themselves radical, leftwing and socialist or socialist/republican. (Such criticism has also been consistently snobbish in tone, the women dismissed as 'housewives," bourgeois' or 'middle-aged' — all terrifically unchic things for the radical left.) In other circumstances, one could envisage that the Peace Movement critics might pooh-pooh the very notion of the Nobel Peace Prize at all, denouncing its 'irrelevance' and perhaps the long line of undistinguished people who have received it. But how could anyone denounce, or call irrelevant, the wonderful achievements of Amnesty International which even at this moment is investigating the dreadful conditions under which Provisional I RA prisoners live in Irish prisons? How could anyone cast a slur over the achievements of that great Irishman, Sean MacBride? If the prize is good enought for such illuminati, well then it must be accepted graciously for the Peace Women, too, who of course accepted it graciously on behalf of the people of Northern Ireland. Graciously, and shrewdly.

`Oh, they've got their heads screwed on all right, those two' I heard in Dublin. 'I will say one thing for them', commented a friend in Belfast, 'It's quite decent of them not to make off with the money'. It really seems that things are looking up for the Belfast women of peace.