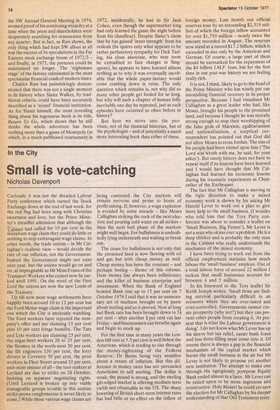 Curiously it was not the dreaded Labour Party conference which turned the Stock Exchange down at the end of last week, for the red flag had been sung with Christian sweetness and love, but the Prime Minister's dreadful admission that although the Zifiinet had -called for 10 per cent as the maximum wage claim they could do little or nothing to stop extravagant wage claims. In other words, the trade unions — in Mr Callaghan's realistic view — would decide the rate of our inflation, not the Government. Indeed the Government might not exist next year, but the unions would go on and on, as impregnable as Mr Moss Evans of the Transport Workers who cannot now be sacked until 1991. On the word of the First Lord the unions are now the new Lords of the Treasury.

Up till now most wage settlements have happily been around 10 to 12 per cent but the Ford Motor wage claim is the important one which the City is anxiously watching. The Ford workers have rejected the company's offer and are claiming 15 per cent plus 10 per cent fringe benefits. The Tate and Lyle workers are claiming 23 per cent, the sugar-beet workers 20 to 25 per cent, the firemen in the north-west 30 per cent, the lift engineers 130 per cent, the lorry drivers in Coventry 50 per cent, the print workers in Fleet Street around 20 per cent, and—most sinister of all — the tool-makers at Leyland are due to strike on 28 October, insisting on separate negotiating rights. (Until Leyland is broken up into viable manageable groups trouble in this outsize strike-prone conglomerate is never likely to cease.) While these various wage claims are being contested the City markets will remain nervous and prone to bouts of profit-taking. If, however, a wage explosion is avoided by some miracle — like Moses Callaghan striking the rock of the next election and pouring cold water on all strikes — then the next bull phase of the markets might well begin. For bullishness is undoubtedly lying underneath and waiting to break Out.

The cause for bullishness is not only that the promised land is now flowing with oil and gas but with cheap money as well. Cheap money has been the constant — and perhaps boring — theme of this column. Dear money has always been inflationary and the killer of business enterprise and investment. When the Bank of England hoisted Bank rate up to 15 per cent on 7 October 1976 I said that it was an unnecessary act of madness brought on by panic about sterling and so it proved. Now at long last Bank rate has been brought down to 51 per cent — after another per cent cut last Friday — and businessmen can breathe again and begin to stock up.

For the first time in many years the London bill rate at 5.3 per cent is well below the American, which is tending to rise through the money-tightening of the Federal Reserve, Dr Burns being very sensitive about a return of inflation. But this difference in money rates has not persuaded Americans to sell sterling. The dollar is weak, the pound is strong, and the sterling gilt-edged market is offering medium-term yields not obtainable in the US. The sharp lowering of British short-term interest rates has had little or no effect on the inflow of foreign money. Last month our official reserves rose by an astounding $2,319 million of which the foreign inflow accounted for over $1,750 million — nearly twice the amount recorded in August. The reserves now stand at a record $17.2 billion, which is exceeded in size only by the American and German. Of course, a large part of them should be earmarked for the repayment of the $4 billion I.M.F. loan, but for the first time in our post-war history we are feeling really rich.

It is not, I think, likely to go to the head of the Prime Minister who has wisely put our astonishing financial recovery in its proper perspective. Because I had visualised Mr Callaghan as a great leader who had, like Moses, brought his people to the promised land, and because I thought he was morally strong enough to stop their worshipping of the false gods of Marxism, egalitarianism and nationalisation, a sceptical correspondent has pointed out that God did not allow Moses to cross Jordan. The sins of his people had been visited upon him (`The Lord was wroth with me, he said, for your sakes'). But surely history does not have to repeat itself if its lessons have been learned and I would have thought that Mr Callaghan had learned his economic lessons during his traumatic experiences as Chancellor of the Exchequer.

The fact that Mr Callaghan is moving in the right direction to make a mixed economy work is shown by his asking Mr Harold Lever to work out a plan to give more help to the small business, (I wonder who told him that the Tory Party conference was about to consider a leaflet on 'Small Business, Big Future'). Mr Lever is not a man who skims over a problem. He is a deep thinker and is probably the only man in the Cabinet who really understands the mechanics of the mixed economy.

I have been trying to work out from the official employment statistics how much labour the 'small business' employs. Out of a total labour force of around 22 million I reckon that small businesses account for between 4 and 5 million.

In his foreword to the Tory leaflet Sir Keith Joseph writes: 'Small firms are finding survival particularly difficult. in an economy where they are over-taxed and over-controlled. Governments cannot create prosperity (why not?) but they can prevent other people from creating it. At present that is what the Labour government is doing'. I do not know what Mr Lever has up his sleeve but tax relief, easier bank loans and less form-filling must come into it. Of course there is always a gap in the financial mechanism of the capital market which leaves the small business in the air but Mr Lever is not likely to propose yet another new institution. The attempt to make one through the egregiously pompous Equity Bank ended almost in a farce. Mr Lever can be relied upon to be more ingenious and constructive. Holy Moses! he could yet save the election for Mr Callaghan by his deeper understanding of that Old Testament story.