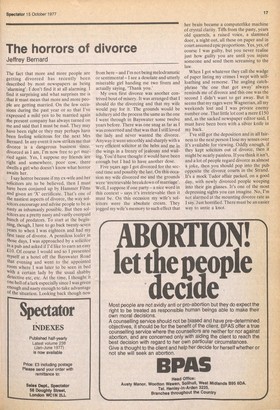 The horrors of divorce

The fact that more and more people are getting divorced has recently been described by most newspapers as being `alarming'. I don't find it at all alarming. I find it surprising and what surprises me is , that it must mean that more and more people are getting married. On the few occasions during the past year or so that I've expressed a mild yen to be married again the present company has always turned on me and said that I must be mad. They may have been right or they may perhaps have been feeling solicitous for the next Mrs Bernard. In any event it now strikes me that divorce is a dangerous business since, divorced aS I am, I'm now free to get married again. Yes, I suppose my friends are right and somewhere, poor cow, there dwells a girl who doesn't know what horror awaits her.

, I say horror because if my ex-wife and her solicitors are to be believed, then I must have been conjured up by Hammer Films and given an 'X' certificate. That's one of the nastiest aspects of divorce, the way solicitors encourage and advise people to be as nasty as inhumanly possible. But then solicitors are a pretty nasty and vastly overpaid bunch of predators. To start at the beginning, though, I have to go back twenty-seven Years to when I was eighteen and had my first taste of divorce. A penniless loafer in !hose days, I was approached by a solicitor in a pub and asked if I'd like to earn an easy £10. Of course I would and so I presented myself at a hotel off the Bayswater Road that evening and went to the appointed room where I was later to be seen in bed With a certain lady by the usual shabby detective etc, etc. At the time, I thought it one hell of a lark especially since I was green enough and nasty enough to take advantage of the situation. Looking back though now from here and I'm not being melodramatic or sentimental — I see a desolate and utterly miserable girl handing me two fivers and actually saying,'Thank you.'

My own first divorce was another contrived bout of misery. It was arranged that! should do the divorcing and that my wife would pay for it. The grounds would be adultery and the process the same as the one I went through in Bayswater some twelve years before. There was one snag as far as I was concerned and that was that I still loved the lady and never wanted the divorce. Anyway it went smoothly and sharply with a very efficient solicitor at the helm and me in the wings in a frenzy of jealousy and wailing. You'd have thought it would have been enough but I had to have another dose.

Five years ago I got divorced for the second time and possibly the last. On this occasion my wife divorced me and the grounds were 'irretrievable breakdown of marriage'. Well, I suppose if one party — a nice word in this context — says it's irretrievable then it must be. On this occasion my wife's solicitors were the absolute cream. They jogged my wife's memory to such effect that her brain became a computerlike machine of crystal clarity. Tiffs from the pasty, years old quarrels, a raised voice, a slammed door, a night out, all these on paper and in court assumed epic proportions. Yes, yes, of course I was guilty, but you never realise just how guilty you are until you injure someone and send them screaming to the law.

When I got whatever they call the wadge of paper listing my crimes I wept with selfloathing and remorse. The angling catchphrase 'the one that got away' always reminds me of divorce and this one was the second I didn't want to get away. But it seems that my rages were Wagnerian, all my weekends lost and I was private enemy number one. That little lot cost a mere £150 and, as the sacked newspaper editor said, I must have been born with a silver knife in my back.

I've still got the deposition and in all fairness to the next person I lose my senses over it's available for viewing. Oddly enough, if they kept solicitors out of divorce, then it might be nearly painless. If you think it isn't, and a lot of people regard divorce as almost a joke, then you should pop into the pub opposite the divorce courts in the Strand. It's a mock Tudor affair packed, on a good day, with newly divorced people weeping into their gin glasses. It's one of the most depressing sights you can imagine. No, rm not alarmed at the mounting divorce rate as I say. Just horrified. There must be an easier way to untie a knot.