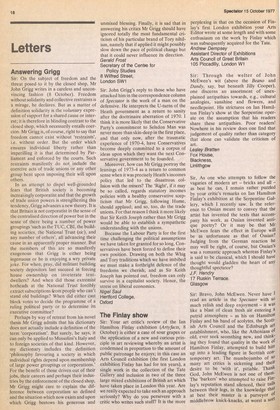 Sir: Your art critic's review of the Ian Hamilton Finlay exhibition (Artyfacts, 8 October) is either a case of sour grapes or the application of a new and curious principle in art reviewing whereby an artist is condemned in proportion to the amount of public patronage he enjoys; in this case an Arts Council exhibition (the first London exhibition Finlay has had for ten years), a single work in the collection of the Tate Gallery and inclusion in two of the three large mixed exhibitions of British art which have taken place in London this year. Are we really expected to take such an approach seriously? Why do you persevere with a critic who writes such stuff? It is the more perplexing in that on the occasion of Finlay's first London exhibition your Arts Editor wrote at some length and with some enthusiasm on the work by Finlay which was subsequently acquired for the Tate. Andrew Dempsey Assistant Director of Exhibitions Arts Council of Great Britain 105 Piccadilly, London W1