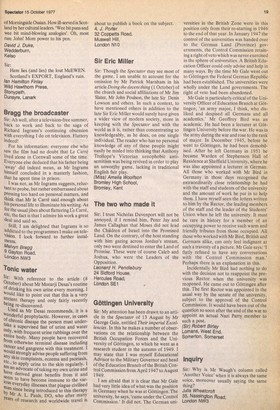 Sir: My attention has been drawn to an article in the Spectator of 13 August by Mr George Gale, entitled Their imperial Excellencies. In this he makes a number of observations on the relationship between the British Occupation Forces and the University of Gottingen, to which he went as a research student in the autumn of 1949. I may state that I was myself Educational Advisor to the Military Governor and head of the Education Branch of the British Control Commission from April 1947 to August 1949.

I am afraid that it is clear that Mr Gale had very little idea of what was the position in Germany when he was at Gottingen. The university, he says, 'came under the Control Commission.' It did not. The German uni versities in the British Zone were in this position only from their re-starting in 1946 to the end of that year. In January 1947 the control of the universities was handed over to the German Land (Province) governments, the Control Commission retaining a right of veto which was never exercised in the sphere of universities. A British Education Officer could only advise and help in many ways. By the time Mr Gale went out to Gottingen the Federal German Republic had been established. The universities were wholly under the Land governments. The right of veto had been abandoned.

Mr Gale is particularly critical of the University Officer of Education Branch at GOttingen; 'an army major, 1 think, who disliked and despised all Germans and all acadeniics.' Mr Geoffrey Bird was an academic. He had been a lecturer at Gottingen University before the war. He was in the army during the war and rose to the rank of major. In December 1945, before he went to Gottingen, he had been demobilised. After he left Germany in 1951 he became Warden of Stephenson Hall of Residence at Sheffield University, where he was also appointed a lecturer in German. All those who worked with Mr Bird in Germany in those days recognised the extraordinarily close relationship he had with the staff and students of the university and the amount of work he put in to help them. I have myself seen the letters written to him by the Rector, the leading members of the staff and the leader of the Students' Union when he left the university. It must be 'rare in history for a member of an occupying power to receive such warm and friendly tributes from those occupied. All those who worked with Mr Bird, British and Germans alike, can only feel indignant at such a travesty of a picture. Mr Gale says: 'I flatly refused to have any conversations with the Control Commission man.' Perhaps there is an explanation in this.

Incidentally Mr Bird had nothing to do with the decision not to reappoint the previous Rector when the university was reopened. He came out to Gottingen after this. The first Rector was appointed in the usual way by the senate of the university, subject to the approval of the Control Commission, It would have been out of the question so soon after the end of the war to appoint an actual Nazi Party member to such a post, (Sir) Robert Bliley Lomans, West End, Somerton, Somerset