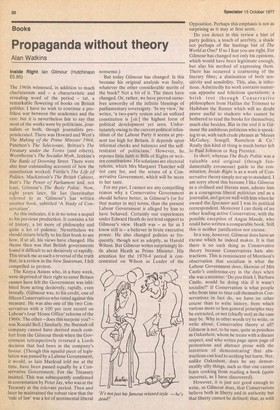 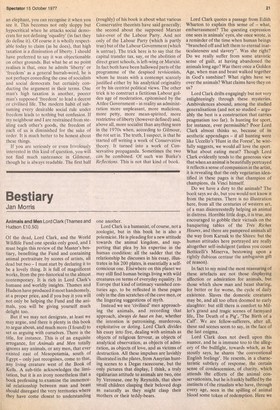 Inside Right Ian Gilmour (Hutchinson £5.95) The J 960s witnessed, in addition to much charlatanism and — a characteristic and revealing word of the period — tat, a remarkable flowering of books on British politics. I have no wish to continue a profitless war between the academics and the rest: but it is nevertheless fair to say that most of the works were by politicians, journalists or both, though journalists preponderated. There was Howard and West's The Making of the Prime Minister 1964, Paterson's The Selectorate, Brittan's The Treasury under the Tories (and others), Worsthot:ne's The Socialist Myth, Jenkins's The Battle of Downing Street. There were also four outstanding accounts of how the constitution worked: Fairlie's The Life of Politics, Mackintosh's The British Cabinet, Butt's The Power of Parliament and, not least, Gilmour's The Body Politic. Now, eight years later, Sir Ian (hereinafter referred to as 'Gilmour') has written another book, subtitled 'A Study of Conservatism'.

As this indicates, it is in no sense a sequel to his previous production. It contains a bit of history, a bit more of philosophy and quite a lot of polemic. Nevertheless we should return briefly to his first book to see how, if at all, his views have changed. His theme then was that British governments found it difficult to act decisively or rapidly. This struck me as such a reversal of the truth that, in a review in the New Statesman, I felt compelled to protest.

The Kenya Asians who, in a bare week, were deprived of their right to enter Britain cannot have felt the Government was inhibited from acting decisively, rapidly, even brutally. (Gilmour was, to his credit, one of fifteen Conservatives who voted against this measure. He was also one of the two Conservatives with a 100 per cent record on Labour's four 'Home Office' reforms of the 1960s. The other — does this surprise you? — was Ronald Bell.) Similarly, the Burmah oil company cannot have derived much comfort from the Gilmour thesis when the Government retrospectively reversed a Lords decision that had been in the company's favour. (Though this squalid piece of legislation was passed by a Labour Government, it would, as fain Macleod told me at the time, have been passed equally by a Conservative Government. For the Treasury insisted. This was subsequently confirmed in conversation by Peter Jay, who was at the Treasury at the relevant period. Then and later he maintained the robust view that the 'rule of law' was a lot of sentimental liberal nonsense.) But today Gilmour has changed. Is this because his original analysis was faulty, whatever the other considerable merits of the book? Not a bit of it. The times have changed. Or, rather, we have proved ourselves unworthy of the infinite blessings of parliamentary sovereignty. 'In my view,' he writes, 'a two-party system and an unfixed constitution is pie] the highest form of political development yet seen. Unfortunately owing to the current political infantilism of the Labour Party it seems at present too high for Britain. It depends upon informal checks and balances and the selfrestraint of politicians.' However, he, reposes little faith in Bills of. Rights or written constitutions. His solutions are electoral reform, which Mrs Margaret Thatcher will not care for, and the return of a Conservative Government, which will be more to her taste.

For my part, I cannot see any compelling reason why a Conservative Government should behave better, in Gilmour's (or for that matter in my) terms, than the present Labour Government is alleged by him to have behaved. Certainly our experiences under Edward Heath do not lend support to Gilmour's view. Heath was — as far as I know still is — a believer in brute executive power. He also changed policies as frequently, though not as adeptly, as Harold Wilson. But Gilmour writes surprisingly little about Heath as Prime Minister. His attention for the 1970-4 period is concentrated on Wilson as Leader of the Opposition. Perhaps this emphasis is not as surprising as it may at first seem.

Do you detect in this review a hint of party politics, a touch of acerbity, a shade not perhaps of the hustings but of The World at One? If so I fear you are right. For Gilmour has changed not only his opinions, which would have been legitimate enough, but also his method of expressing them. There has occurred a coarsening of the literary fibre; a diminution of both sensitivity and sensibility. This, alas, is infectious. Admittedly his work contains numerous apposite and felicitous quotations; a brisk trot through Conservative philosophers from Halifax the Trimmer to Hailsham the Ranter which will no doubt prove useful to students who cannot be bothered to read the books for themselves; much else besides. Ffut in the end it is Gilmour the ambitious politician who is speaking to us, with such crude phrases as 'Messrs McGahey, Scargill, Ramelson & Co.' Really this kind of thing is much better left to Paul Johnson or Reg Prentice.

In short, whereas The Body Politic was a valuable and original (though fundamentally erroneous) guide to the constitution, Inside Right is as a work of Conservative theory simply not up to standard. I am sorry about this because I like Gilmour as a civilised and literate man, admire him as a courageous liberal politician and as a journalist, and got on well with him when he owned the Spectator and I was its political correspondent. Moreover I can think of no other leading active Conservative, with the possible exception of Angus Maude, who could have written a comparable book. Still this is neither justification nor excuse.

In a way, however, Gilmour does have an excuse which he indeed makes. It is that there is no such thing as Conservative theory because Conservatives hate abstractions. This is reminiscent of Morrison's observation that socialism is what the Labour Government does; likewise of Mrs Castle's conference-cry in the days when she was a minister: 'Do you think I, Barbara Castle, would be doing this if it wasn't socialist?' If Conservatism is what people who from time to time call themselves Conservatives in fact do, we have no other course than to write history, from which various more or less general principles may be extracted, or not (chiefly not) as the case may be. Why in other words try to write, or write about, Conservative theory at all? Gilmour is not, to be sure, quite as pointless as Oakeshott, whom he treats with a distant respect, and who writes page upon page of pretentious and abstract prose with the intention of demonstrating' that abstractions can lead to nothing but harm. Nor, unlike Oakeshott, does he say demonstrably silly things, such as that one cannot learn cooking from reading a book (quite incorrect, as I have discovered).

However, it is just not good enough to write, as Gilmour does, that Conservatives believe both in liberty and in authority but that liberty cannot be defined; that, as with an elephant, you can recognise it when you see it. This becomes not only sloppy but hypocritical when he attacks social democrats for not defining 'equality' (in fact they do define it). Of course it is wholly respectable today to claim (as he does), that high taxation is a diminution of liberty. I should have preferred to say it was objectionable on other grounds. But what he at no point realises is that, once he admits 'liberty' or 'freedom' as a general hurrah-word, he is not perhaps conceding the case of socialists and social democrats but certainly conducting the argument in their terms. One man's high taxation is another, poorer man's supposed 'freedom' to lead a decent or civilised life. The modern habit of subsuming every desirable social rule under freedom leads to nothing but confusion. If my neighbour and I are restrained from stealing each other's goods, the freedom of each of us is diminished for the sake of order. It is much better to be honest about these things.

If you are seriously or even frivolously interested in this kind of question, you will not find much sustenance in Gilmour, though he is always readable. The first half (roughly) of his book is about what various Conservative theorists have said generally; the second about the supposed Marxist take-over of the Labour Party. And not only of the Labour Party (which is partly true) but of the Labour Government (which is untrue). The trick here is to say that the capital transfer tax, say, or the abolition of direct grant schools, is left-wing or Marxist. In fact both have been hallowed parts of the programme of the despised revisionists, whom he treats with a contempt scarcely justified either by his analytical originality or by his centrist political views. The other trick is to construct a fictitious Labour golden age of moderation, epitomised by the Attlee Government — in reality an administration more unpleasant, more malicious, more petty, more mean-spirited, more restrictive of liberty (however defined) and, above all, more socialist than anything seen in the 1970s when, according to Gilmour, the rot set in. The truth, I suspect, is that he started off writing a work of Conservative theory. It turned into a work of Conservative propaganda. Sometimes the two can be combined. Of such was Burke's Reflections. This is not that kind of book.