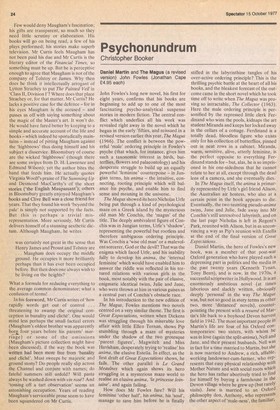 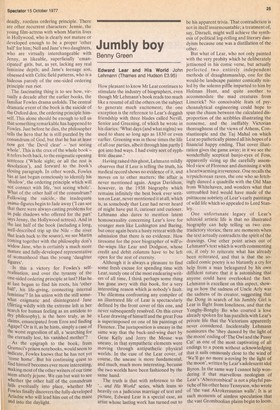 Daniel Martin and The Magus (a revised version) John Fowles (Jonathan Cape E4.95 each) John Fowles's long new novel, his first for eight years, confirms that his books are beginning to add up to one of the most fascinating psycho-analytical suspense stories in modern fiction. The central conflict which underlies all his work was revealed right away in the novel which he began in the early 'fifties, and reissued in a revised version earlier this year, The Magus (1966). The conflict is between the powerful 'male' ordering principle in Fowles's psyche (that which, for instance, gives him such a taxonomic interest in birds, butterflies, flowers and palaeontology) and his desperate struggle to build up an equally powerful 'feminine' counterpoise — in Jungian terms, his anima — the intuitive, connecting, rooting principle which will balance his psyche, and enable him to find sense and meaning in the universe.

The Magus showed its hero Nicholas Urfe being put through a kind of psychological maze on a Greek island by the mysterious old man Mr Conchis, the 'magus' of the title. The deeply ambivalent figure of Conchis was in Jungian terms, Urfe's 'shadow', representing the powerful but rootless and therefore ambiguous ordering principle. Was Conchis a 'wise old man' or a malevolent sorcerer, God or the devil? That was the enigma which faced Urfe, and his inability fully to develop his anima, the 'internal feminine' which would have enabled him to answer the riddle was reflected in his tortured relations with various girls in the book, most notably with the pair of elusive, enigmatic identical twins, Julie and June, who were thrown at him in various guises as a central part of Conchis's obstacle race.

In his introduction to the new edition of The Magus, Fowles mentions two novels centred on a very similar theme. The first is Great Expectations, written when Dickens was struggling through his miserable love affair with little Ellen Ternan, shows Pip stumbling through a maze of mysteries under the shadow of the two grotesque 'parent figures', Magwitch and Miss Havisham, desperately trying to 'realise' his anima, the elusive Estella. In effect, as the first draft of Great Expectations shows, he fails. The other parallel is Le Grand Meaulnes which again shows its hero struggling in a mysterious maze world to realise an elusive an/ma, `la princesse lointa/ne', and again failing.

How does Mr Fowles fare? Will his feminine 'other half, his anima, his 'soul', manage to save him before he is finally stifled in the labyrinthine tangles of his over-active ordering principle? This is the thrilling psychic battle at the heart of all his books, and the bleakest forecast of the outcome came in the short novel which he took time off to write when The Magus was proving so intractable, The Collector (1963). Here the male ordering principle is personified by the repressed little clerk Ferdinand who wins the pools, kidnaps the art student Miranda and keeps her locked away in the cellars of a cottage. Ferdinand is a totally dead, bloodless figure who exists only for his collection of butterflies, pinned out in neat rows in a cabinet. Miranda, warm, sensitive, alive, utterly feminine, is the perfect opposite to everything Ferdinand stands for — but, alas, he is so imprisoned in his' one-sidedness that he cannot relate to her at all, except through the dead lens of a camera, and she eventually dies.

In The Magus itself, the anima is primarily represented by Urfe's girl friend Alison, the Australian air hostess, who also at a certain point in the book appears to die. Eventually, the two taunting pseudo-anima twins, June and Julie, fade away into Mr Conchis's still unresolved labyrinth, and on the last page Nicholas is left in Regent's Park, reunited with Alison, but in as unconvincing a way as Pip's reunion with Estella at the end of the final version of Great Expectations.

Daniel Martin, the hero of Fowles's new book, was a member of that post-war Oxford generation who have played such .a depressing part in politics and the media in the past twenty years (Kenneth Tynan, Tony Benn), and is now, in the 1970s, a successful scriptwriter in Hollywood. It is an enormously ambitious novel (at times laborious and slackly written, obviously deeply 'personal' in the way The Magus was, but not so good in story terms as other two, more 'distanced' novels), counterpointing the present with a resume of Martin's life back to a boyhood Devon harvest field in 1942. The most important people in Martin's life are four of his Oxford contemporaries: two sisters, with wh6m he was in love (again the split-anima), Nell and Jane, and their present husbands. Nell was in fact for a time married to Martin, but she is now married to Andrew, a rich, affable, working landowner-cum-farmer, who represents that easy physical relationship with Mother Nature and with social roots which the hero has rather abortively tried to find for himself by buying a farmhouse in the Devon village where he grew up (but rarelY visits). Jane is married to an Oxford philosophy don, Anthony, who represents the other aspect of 'male-ness', the familiar, deadly, rootless ordering principle. There are other recurrent characters: Jennie, the young film-actress with whom Martin lives in Hollywood, who is clearly not mature or developed enough to be a proper 'other half' for him; Nell and Jane's two daughters, who are virtually interchangeable with Jenny, as likeable, superficially 'emancipated' girls, but, as yet, lacking any real feminine depth; and Jane's teenage son, obsessed with Celtic field patterns, who is a hideous parody of the one-sided ordering principle run riot.

The fascinating thing is to see how, virtually a decade after the earlier books, the familiar Fowles drama unfolds. The central dramatic event of the book is the suicide of the Oxford don, the ordering principle himself. This alone should be enough to tell us that something remarkable has happened to Fowles. Just before he dies, the philosopher tells the hero that he is still puzzled by the conundrum of God, but that he has at least now got 'the Devil clear' — 'not seeing whole'. This is the crux of the whole book — it refers both back, to the enigmatic opening sentence ('Whole sight; or all the rest is desolation), and forward to the book's Closing paragraph. In other words, Fowles has at last begun consciously to identify his 'shadow', the ordering principle which will not connect with life, 'not seeing whole'. What of the other half of the conundrum? Following the suicide,. the inadequate unima-figures begin to fade away ('I can see that there were always casting problems for US pale shadows who offered for the part' says Jenny, the Hollywood actress). And in the last half of the book (including a long, Well-described trip up the Nile — the river that leads back to the source), we see Martin Coming together with the philosophy don's Widow Jane, who is certainly a much more mature and fully-developed representative of womanhood than the young 'daughter figures'.

Is this a victory for Fowles's selfrealisation, and over the tyranny of the one-sided ordering principle at last? Has he at last begun to find his roots, his 'other half', his life-giving, connecting internal feminine'? In his union with the still somewhat enigmatic and disintegrated Jane (flirting wildly with the extreme left in her search for human feeling as an antidote to dry philosophy), is the hero truly, as he Claims, emancipated from Eros and finding Agape? Or is it, as he hints, simply a case of the worst regrestion of all, a 'searching for the eternally lost, his vanished mother'?

As the epigraph to the book, from Gramsci's prison notebooks, would seem to indicate, Fowles knows that he has not yet come home'. But his continuing quest to find himself becomes ever more interesting, making most of the other writers of our time seem utterly jejune. We can but wait to see Whether the other half of the conundrum falls eventually into place, whether Mr Fowles finally discovers the fully-developed Ariadne who will lead him out of the maze and into the daylight.