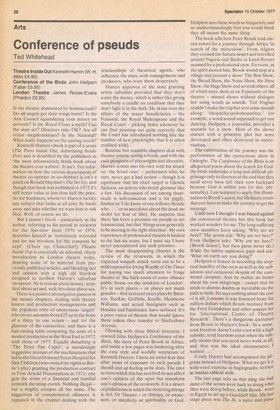 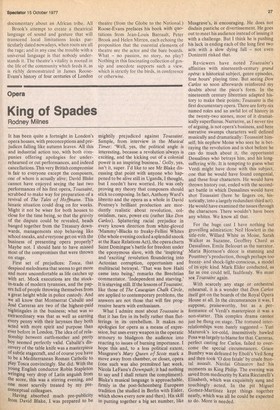 Theatre Inside Out Kenneth Hurren (W. H. Allen £4.95) Conference of the Birds John Heilpern (Faber £5.95) London Theatre James Roose-Evans (Phaidon £6.95) Is the theatre dominated by homosexuals? Do all angels get their wings burnt? Is the Arts Council squandering your money on perverts? Is the Royal Court a myth? Can the stars act? Directors rule, OK? Are all critics megalomaniacs? Is the National? What really happens on the casting couch?

Kenneth Hurren's hook is part of a series (The Press Inside Out, Advertising Inside Out) and is described by the publishers as 'the most informatively frank book .about the theatre ever written', It isn't. For information on how the various departments of theatre co-operate or co-destruct it isn't a patch on Ronald Hayman's The Set-Up, and though that book was published in 1973 it's still better value at less than half the price. As for frankness, whenever Hurren tackles any subject that looks at all juicy he backs away and asks whether we want him to risk libel. Well, of course we do.

But I mustn't frivol — particularly as the author, referring to his period as reviewer for the Spectator from 1970 to 1976, describes himself as 'notoriously wayward and far too frivolous for the company he kept'. (Cheer up, Chancellor!) Theatre Inside Out is essentially an informal, chatty introduction to London theatre today, drawing some of its material from previously published articles, and blending fact and opinion with a high old freedom designed to confirm Hurren's suburban viewpoint. He is serious about money, sceptical about art and, well, frivolous about sex.

There is a positive investigative passion in the money chapters, dealing with theatre lessees and production managements and the populous tribe of anonymous 'angels' who invest amounts from £25 up in the hope of a thirty to one return — and for the glamour of the connection; and 'there is a hair-raising table comparing the costs of a modest production in the West End in 1972 with those of 1977. Equally disturbing is 'The Peter Pan Caper', a tantalisingly suggestive account of the machinations I hat led to the Great Ormond Street Hospital for Sick Children (who owned the rights to Barre's play) granting the production contract to Toni Arnold Presentations in 1971: one gets the sense of a financial and familial network dictating events. Nothing illegal — but a mighty octopus all the same. The suggestion of conspiratorial alliances is repeated in the chapter dealing with the relationships of theatrical agents, who influence the stars, with managements and producers, who want them desperately.

Hurren approves of the state granting artists subsidies provided that they don't waste the money, which is rather like giving somebody a candle on condition that they don't light it in the dark. He skims over the affairs of the major beneficiaries — the National, the Royal Shakespeare and the Royal Court — picking holes wherever he can (but pointing out quite correctly that the Court has introduced nothing like the number of new ylaywrights that it is often credited with).

Routine but readable chapters deal with theatre unions, acting schools, and with the cash prospects of playwrights and directors. Hurren comes into his own with his attack on 'the loved ones' — performers who, he says, never get a bad review — though it is significant that his chief target is Glenda Jackson, an actress who treats glamour like a fart. His discussion of sex among theatricals is self-conscious and a bit giggly, limited to'! do know of one willowy blonde who. . . or to anecdotes about the dead, no doubt for fear of libel. He suspects that there has been a pressure on people to act homosexual, but that 'things seem generally to be moving in the right direction'. My own experience of professional theatre is limited to the last six years, but I must say I have never encountered any such pressure.

The most disappointing chapter is the review of the reviewers, in which the expected waspish attack turns out to be a mild reproof for Irving Wardle of The Times for paying too much attention to fringe theatre at `the back-room of some obscure public house on the outskirts of London', It's in such places — or places not much grander that in recent years plays by Brenton, Rudk in, Griffiths, Keeffe, Heathcote Williams, and actual foreigners such as Handke and Fassbinder, have surfaced. It's a poor vision of theatre that would ignore them unless they transfer to Shaftesbury Avenue.

Glowing with these liberal strictures, I opened John Heilpern's Conference of the Birds, the story of Peter Brook in Africa, and inside a few pages was hankering after the easy style and worldly scepticism of Kenneth Hurren: I have an awful fear that after years of exposure to such pseuds I should end up feeling as he does. The rave reviews which this has received do not affect one's opinion of the opus but transform one's opinion of the reviewers. It is a desert of philistinism in which the recurring mirage is Art. Or Theatre — or therapy, or awareness, or simplicity or spirituality or God. Heilpern uses these words so frequently and SO undiscriminatingly that you would think they all meant the same thing.

The book tells how Peter Brook took eleven actors for a journey through Africa 'in search of the miraculous'. From Algiers they crossed the Sahara desert and travelled around Nigeria and Biafra in Land-Rovers manned by a professional crew. En route, as the spirit moved him, Brook would stop at a village and present a show: The Box Show, the Bread Show, the Noise Show, the Shoe Show, the Hags Show and several others, all of which were shots at an Esperanto of the theatre — mimed shows without dialogue but using words as sounds. Ted Hughes couldn't make the trip but sent some sounds along: 'shopatiketpahohopatitse,' for example, a word-sound supposed to get you dancing. Heilpern, a journalist, provided a scenario for a show. Most of the shows started with a primitive plot but were developed and often destroyed in improvisation.

. The culmination of the journey was the performance of the eponymous show in Oshogbo. The Conference of the Birds is an allegorical poem about the search for God: the birds undertake a long and difficult pil grimage only to discover at the end that they need never have left their own backyard because God is within you (or not, pre sumably). I am tempted to apply this illumination to Brook's quest, but Heilpern insists that you have to make the journey to get the message.

Even Heilpern asks: 'Why are we here?' (Brook doesn't, but then gurus never do.) While the native audiences gape and ask: 'What on earth are you doing?'

Heilpern is honest in recording the sceptical hostility of the crew as well as the self ishness and occasional despair of the corn-, munal campers. And he makes no bones about his own misgivings — except that he tends to dismiss doubts as inevitable on the path to faith. He says nothing about the cost of it all; I assume it was financed from the million dollars which Brook received from the Ford Foundation and other sources for his 'International Centre of Theatre Research'. There's a dangerous quotation from Brook in Hurren's book: 'In a sense, total freedom doesn't exist even with a high subsidy; total freedom exists when the subsidy means that you need never work at all, and that was the ideal circumstance I wanted .

If only Hurren had accompanied the pilgrims instead of leilpern. What we get is a wide-eyed exercise in hagiography written in instant-tabloid style.

The last page tells us that after the ball most of the actors went back to doing what they were doing before, while Brook went to Egypt to set up a Gurdjieff film. His last stage piece was The lk„ a naive and pious documentary about an African tribe. All Brook's attempt to create a theatrical language of sound and gesture that will transcend local limitations looks particularly dated nowadays, when roots are all the rage; and in any case the trouble with a universal language is that nobody understands it. The theatre's vitality is rooted in the life of the community which feeds it, as is richly demonstrated in James RooseEvans's history of four centuries of London theatre (from the Globe to the National.) Roose-Evans prefaces his book with quotations from Jean-Louis Barrault, Peter Brook and Helen Mirren, each echoing the proposition that the essential elements of theatre are the actor and the bare boards. What — no passion, no story, no play? Nothing in this fascinating collection of gossip and anecdote supports such a view, which is strictly for the birds, in conference or otherwise.