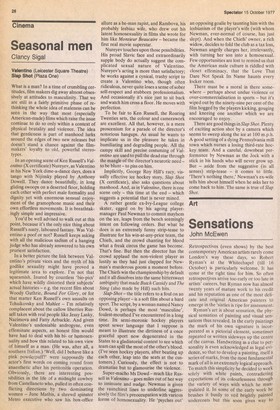 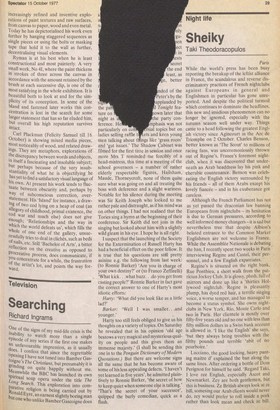 Retrospectives (even shows) by the best contemporary American artists rarely come London's way these days, so Robert Ryman's at the Whitechapel (till 16 October) is particularly welcome. It has come at the right time for him. So often retrospectives arrive too early or too late in artists' careers, but Ryman now has almost twenty years of mature work to his credit and his reputation as one of the most delicate and original American painters to emerge in the 'sixties is ripe for assessment.

Ryman's art is about sensation, the physical sensation of painting and visual sensations thus revealed. In the early paintings the mark of his own signature is incorporated as a pictorial element, sometimes repeated or written sideways up the centre of the canvas. Handwriting as a clue to personality is even acknowledged as legal evidence, so that to develop a painting, itself a series of marks, from the most fundamental mark of all is an extremely logical approach. To match this simplicity he decided to work solely with white paints, contradicting expectations of its colourlessness through the variety of ways with which he manipulated it. In some of the early work he brushes it busily to veil brightly painted undercoats but this soon gives way to increasingly refined and inventive explorations of paint textures and raw surfaces, from canvas to paper, wood and even metal. Today he has depictorialised his work even further by hanging staggered sequences as single pieces or using the bolts or masking tape that hold it to the wall as further, decentralising visual elements.

Ryman is at his best when he is least constructional and most painterly. A very small work, No 41, where the paint thickens in strokes of three across the canvas in accordance with the amount retained by the brush at each successive dip, is one of the most satisfying in the whole exhibition. It is beautiful both to look at and for the simplicity of its conception. In some of the bland and fastened later works this concentration is lost in the search for some larger statement that has so far eluded him, but overall his high reputation survives intact.

Carl Plackman (Felicity Samuel till 16 October) is showing mixed media pieces, most noticeably of wood, and related drawings. They are metaphors, explorations of the discrepancy between words and objects, in Itself a fascinating and insoluble subject; but perhaps because of the very insubstantiality of what he is objectifying he has yet to find a satisfactory visual language of his own. At present his work tends to fluctuate between obscurity and, perhaps by way of subconscious correction, overstatement. His 'Island' for instance, a drawing of two cod lying on a heap of coal (an allegory of childhood, primal existence, the cod war and much else) does not give enough; 'Relationships and the way in Which the world defeats us', which fills the Whole of one end of the gallery, unsuccessfully tries to deal in cliches, such as beds of nails, etc. Still 'Bachelor of Arts', a bitter reflection on the creative as opposed to Procreative process, does communicate, if You concentrate for a while, the frustration of the artist's lot, and points the way for ward.