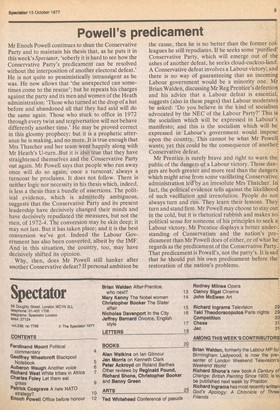 Mr Enoch Powell continues to shun the Conservative Party and to maintain his thesis that, as he puts it in this week's Spectator, 'soberly it is hard to see how the Conservative Party's predicament can be resolved without the interposition of another electoral defeat.' He is not quite so pessimistically intransigent as he was. He now allows that 'the unexpected can sometimes come to the rescue'; but he repeats his charges against the party and its men and women of the Heath administration: 'Those who turned at the drop of a hat before and abandoned all that they had said will do the same again. Those who stuck to office in 1972 through every twist and tergiversation will not behave differently another time.' He may be proved correct in this gloomy prophecy: but it is a prophetic utterance he is making, and no more. It is true enough that Mrs Thatcher and her team went happily along with Mr Heath's U-turn.iBut it is also true that they have straightened themselves and the Conservative Party out again. Mr Powell says that people who run away once will do so again; once a turncoat; always a turncoat he proclaims. It does not follow. There is neither logic nor necessity in his thesis which, indeed, is less a thesis than a bundle of assertions. The political evidence, which is admittedly ambiguous, suggests that the Conservative Party and its present leadership have decisively changed their minds and have decisively repudiated the measures, but not the men, of 1972-4. The conversion may be skin deep; it may not last. But it has taken place; and it is the best conversion we've got. Indeed the Labour Government has also been converted, albeit by the IMF. And in this situation, the country, too, may have decisively shifted its opinion.

Why, then, does Mr Powell still hanker after another Conservative defeat? If personal ambition be

the cause, then he is no better than the former colleagues he still repudiates. If he seeks some 'purified' Conservative Party, which will emerge out of the ashes of another defeat, he seeks cloud-cuckoo-land. A Conservative defeat involves a Labour victory; and there is no way of guaranteeing that an incoming Labour government would be a minority one. Mr Brian Walden, discussing Mr Reg Prentice's defection and his advice that a Labour defeat is essential, suggests (also in these pages) that Labour moderate's be asked: 'Do you believe in the kind of socialism advocated by the NEC of the Labour Party?' This is the socialism which will be expressed in Labour'S, manifesto; and this is the socialism which will be: expressed in Labour's government would impose upon the country. This cannot be what Mr Powell wants; yet this could be the consequence of another Conservative defeat.

Mr Prentice is surely brave and right to warn the public of the dangers of a Labour victory. Those dangers are both greater and more real than the dangers which might arise from some vacillating Conservative administration lecrby .an irresolute Mrs Thatcher. In fact, the political evidence tells against the likelihood of such vacillation and irresolution. People' do not always turn and run. They learn their lessons. They turn and stand firm. Mr Powell may choose to stay out in the cold, but it is rhetorical rubbish and makes no political sense for someone of his principles to seek a Labour victory. Mr Prentice displays a better understanding of Conservatism and the nation's predicament than Mr Powell does of either, or of what he regards as the predicament of the Conservative Party. That predicament is Powell's, not the party's. It is sad that he Should put his own predicament before the restoration of the nation's problems.