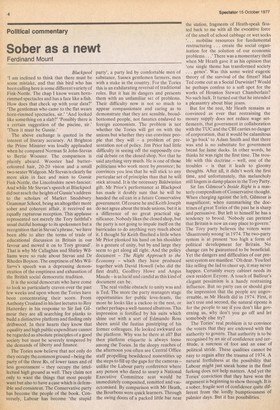 Sober as a newt

Blackpool 'I am inclined to think that there must be some mistake, and that this bird who has been calling here is some different variety of Fink-Nottle, The chap I know wears hornrimmed spectacles and has a face like a fish. How does that check up with your data?' 'The gentleman who came to the flat wears horn-rimmed spectacles, sir.' And looked like something on a slab?' Possibly there is a certain suggestion of the piscine, sir.' 'Then it must be Gussie.° The above exchange is quoted in the interest of literary accuracy. At Brighton the Prime Minister was loudly applauded when he compared Norman St John-Stevas to Bertie Wooster. The comparison is plainly absurd. Wooster had buttercoloured hair, 20-20 vision and a small two-seater Widgeon. Mr Stevas is clearly far more akin in face and mien to Gussie Fink-Nottle, the Lincolnshire newt-fancier. And while Mr Stevas's speech at Blackpool did not reach the heights of Gussie's address to the scholars of Market Snodsbury Grammar School, being an altogether more sober and coherent affair, it received an equally rapturous reception. This applause represented not merely the Tory faithful's usual dutiful homage to its spokesmen but a recognition that in Stevas's phrase, 'we have been able to alter the terms of trade of educational discussion in Britain in our favour and moved it on to Tory ground'. That is why Mr Callaghan and Shirley Williams were so rude about Stevas and Dr Rhodes Boyson. The emptiness of Mrs Williams's speech was a depressing demonstration of the emptiness and exhaustion of the British social democratic tradition.

It is the social democrats who have come to look so particularly craven over the past few weeks and upon whom the Tories have been concentrating their scorn. From Anthony Crosland in his last lectures to Roy Hattersley in his response to Sir Ian Gilmour they are all searching for planks to build a distinctive platform and finding only driftwood. In their hearts they know that equality and high public expenditure cannot be regarded as absolute principles of a good society but must be severely tempered by the demands of liberty and finance.

The Tories now believe that not only do they occupy the,common ground — being the party of the three Rs, of lower taxes and of less government — they occupy the intellectual high ground as well. They claim not only to want the things that most people want but also to have a case which is defensible and consistent. The Conservative party has become the people of the book. Conversely, Labour has become 'the stupid party', a party led by comfortable men of substance, Sussex gentlemen farmers, men with a stake in the country. For the Tories this is an exhilarating reversal Of traditional roles. But it has its dangers and presents them with an unfamiliar set of problems. Their difficulty now is not so much to appear compassionate and caring as to demonstrate that they are sensible, broadbottomed people, not fanatics enslaved to foreign economists. The problem is not whether the Tories will get on with the unions but whether they can convince people that they will — a problem of presentation not of policy. Jim Prior had little difficulty in seeing off the supposedly crucial debate on the closed shop. Not that he said anything very much. He is one of those politicians who work more by presence; he convinces you less that he will stick to any particular set of principles than that he will stick around. It is the necessary Baldwinian gift. Mr Prior's performance at Blackpool has made it doubly sure that he will be handed the oil can in a future Conservative government. Of course he and Keith Joseph do not agree about the trade unions, but it is a difference of no great practical significance. Nobody likes the closed shop, but the party is not going to impale itself on the barricades to do anything very much about it. I thought Sir Keith flinched a little when Mr Prior plonked his hand on his shoulder in a gesture of unity, but by and large they seem to get along all right. And the policy document — The Right Approach to the Economy — which they have produced together with David Howell (who did the first draft), Geoffrey Howe and Angus Maude — is as lucid and candid as this kind of document can be.

The real visible obstacle to unity was and is Ted. The more the party managers stage opportunities for public love-feasts, the more he looks like a cuckoo in the nest, or rather perhaps a well-tanned albatross. This impression is fortified by his suits which shine out with a sort of Edmundo Ross sheen amid the fustian pinstriping of his former colleagues. He looked awkward on the platform. Why was he there at all? But then platform etiquette is always loose among the Tories. In the sleepy reaches of the afternoon you often see Central Office staff propelling bewildered nonentities• up the steps to fill up the gaps for the cameras — unlike the Labour party conference where any person who dared to usurp a National Executive Committee seat would be immediately composited, remitted and vasectomised. By comparison with Mr Heath, the Bourbons were quick learners. Through the swing doors of a packed little bar near the station, fragments of Heath-speak floated back to me with all the evocative force of the smell of school cabbage or wet socks . mobilise resources for fundamental restructuring . . . create the social organisation for the solution of our economic problems. .° There was a momentary thrill when Mr Heath gave it as his opinion that 'one single theme has transformed society . . . genes'. Was this some weird eugenic theory of the survival of the fittest? Had Ted come out as a Social Darwinist? Would he perhaps confess to a soft spot for the works of Houston Stewart Chamberlain? No such luck. It turned out that he intended a pleasantry about blue jeans.

But for the rest, Mr Heath remains as convinced as ever that restraining the money supply does not reduce wage settlements, that government in collaboration with the TUC and the CBI carries no danger of corporatism, that it would be calamitous to `go back' to Adam Smith and that there was and is no substitute for government bread for lame ducks. In other words, he thinks he was right the first time. The trouble with this doctrine — well, one of the troubles — is that it leads to gloomy thoughts. After all, it didn't work the first time, and unfortunately, this melancholy still lingers in damp places in the Tory Party.

Sir Ian Gilmour's Inside Right is a masterly compendium of Conservative thought. When charging against the left, Gilmour is magnificent; when summarising the doctrines of great Tories of the past he is sharp and persuasive. But left to himself he has a tendency to brood. 'Nobody can pretend that Britain is now an easy place to govern.' The Tory party believes the voters were 'disastrously wrong' in 1974. The two-party system is at present 'too high a form of political development for Britain. No change can be guaranteed to be beneficial. Yet the dangers and difficulties of our present system are manifest.' Oh dear. You feel like telling the lad to cheer up, it may never happen. Certainly every cabinet needs its own resident Eeyore. A touch of Balfour's elegant pessimism is a handy restraining influence. But no party can or should give the impression that the people are ungovernable, as Mr Heath did in 1974. First, it isn't true and second, the natural riposte is for the people to say if you don't like governing us, why don't you go off and let somebody else try?

The Tories' real problem is to convince the voters that they are endowed with the authority to govern. That authority is to be recognised by an air of confidence and certitude, a sureness of foot and an ease of political stride. These qualities cannot be easy to regain after the trauma of 1974. A natural fretfulness at the possibility that Labour might just sneak home in the final furlong does not help matters. And yet the Tories' conviction that they have won the argument is beginning to show through. It is a sober, fragile sort of confidence quite different from the lordly bumptiousness of palmier days. But it has possibilities,