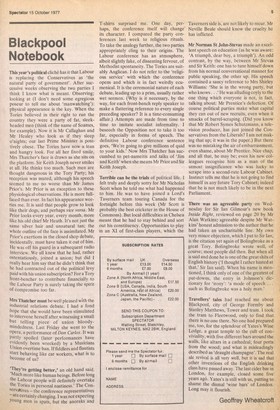 This year's political cliché has it that Labour is replacing the Conservatives as 'the natural party of government'. After successive weeks observing the two parties I think I know what is meant. Observing; looking at (I don't need some egregious poseur to tell me about `manwatching'): physical appearance is the key. When the Tories believed in their right to run the country they were a party of fat, sleekheaded men (think of the name of Soames, for example). Now it is Mr Callaghan and Mr Healey who look as if they sleep &nights our last Prime Minister is positively obese. The Tories have now a lean and hungry look. For all her fixed smile, Mrs Thatcher's face is drawn as she sits on the platform. Sir Keith Joseph never smiles at all. He thinks too much. Such men are thought dangerous in the Tory Party; his reception was muted, although his speech seemed to me no worse than Mr James Prior's. Mr Prior is an exception to these physiological observations. He is more fullfaced than ever. In fact his appearance worries me. It is said that people grow to look like their dogs, and perhaps vice versa. Mr Prior looks every year, every month, more like his old chief Mr Heath. It's not just the same silver hair and unnatural tan; the Whole outline of the face is assimilated. Mr Prior's exertions in the closed shop debate, incidentally, must have taken it out of him. He was off his guard in a subsequent radio interview. We all knew that he had, rather ostentatiously, joined a union; but did I really hear him say that he didn't think that he had contracted out of the political levy paid with his union subscription? For a Tory front-bencher to contribute financially to the Labour Party is surely taking the spirit at compromise too far, Mrs Thatcher must be well pleased with the industrial relations debate. I had a fond hope that she would have been stimulated to intervene herself after witnessing a small but telling piece of union bloodymindedness. Last Friday she went to the opera, a performance of Don Carlos. It was Partly spoiled (later performances have evidently been wrecked) by a Musicians Union overtime ban. If fiddlers and flautists start behaving like car workers, what is to become of us?

'They're getting better,' an old hand said. 'Much more like human beings. Before long the Labour people will definitely overtake the Tories in personal nastiness.' The Conservatives — the conference representatives — are certainly changing. I was not expecting Young men in spats, but the anoraks and T-shirts surprised me. One day, perhaps, the conference itself will change" its character. I compared the party conferences last week to religious rituals. To take the analogy further, the two parties appropriately cling to their origins. The Labour conference has an atmosphere, albeit slightly fake, of dissenting fervour, of Methodist spontaneity. The Tories are suitably Anglican. I do not refer to the 'religious service' with which the conference opens and which is in fact weirdly ecumenical. It is the ceremonial nature of each debate, leading up to a prim, usually rather wet sermon. (Why is it necessary, by the way, for each front-bench reply speaker to make a flattering reference to every single preceding speaker? It is a time-consuming affair.) Attempts are made from time to time to imitate socialist informality. I beseech the Opposition not to take it too far, especially in forms of speech. The definitive Labour conference sentence goes, 'We're going to give millions of quid to your kids,' Now Mrs Thatcher has succumbed to pet-nameitis and talks of 'Jim and Keith' when she means Mr Prior and Sir Keith Joseph.

Terrible can be the trials of political life. I felt truly and deeply sorry for Mr Nicholas Scott when he told me what had happened to him. He was to have joined a Lord's Taverners team touring Canada for the fortnight before this week (Mr Scott is probably the best cricketer in the House of Commons). But local difficulties in Chelsea meant that he had to stay behind and sort out his constituency. Opportunities to play in an XI of first-class players, which the Taverners side is, are not likely to recur. Mr Neville Beale should know the cruelty he has inflicted.

Mr Norman St John-Stevas made an excellent speech on education (as he was aware: 'A triumph, dear boy, a triumph'). An odd contrast, by the way, between Mr Stevas and Sir Keith: one has to tune himself down from his normal conversational manner for public speaking, the other up. His speech contained a saucy reference to Mrs Shirley Williams: 'She is in the wrong party, but who knows. . He was alluding coyly to the one thing which everyone is not, in fact, talking about: Mr Prentice's defection. Of course political parties make what capital they can out of new recruits, even when it smacks of barrel-scraping. (Did you know that Mr Robert Symes Schutzmann, a television producer, has just joined the Conservatives from the Liberals? I am not making that up; it was in the paper.) But there was no mistaking the air of embarrassment, even shame, about Mr Prentice. Nice chap, and all that, he may be; even his new colleagues recognise him as a man of the utmost insignificance who was lucky to scrape into a second-rate Labour Cabinet. Instinct tells me that he is not going to find himself in any future Tory Cabinet; indeed that he is not much likely to be in the next Parliament.

There was an agreeable party on Wednesday for Sir Ian Gilmour's new book Inside Right, reviewed on page 20 by Mr Alan Watkins; agreeable despite Mr Watkins' honest admission to the author that he had taken an uncharitable line. My own very minor objection, which I put to Sir Ian, is the citation yet again of Bolingbroke as a great Tory. Bolingbroke wrote well, of course; most people did then. But when all is said and done he is one of the great shits of English history CI thought I rather hinted at that,' Sir Ian said). When his name is mentioned, I think only of one of the greatest of put-downs, the entry in Johnson's dictionary for 'irony': 'a mode of speech such as Bolingbroke was a holy man.'

Travellers' tales had reached me about 13)ackpool, city of George Formby and Stanley Matthews, Tower and tram. I took the tram to, Fleetwood, only to find that there is no one there. No one had prepared me, too, for the splendour of Yates's Wine Lodge, a great temple to the cult of conviviality, with five different bars around the walls, like altars in a cathedral; four ports from the wood; and what is misleadingly described as 'draught champagne'. The real ale revival is all very well, but it is sad that other inventions of the English drinking class have passed away. The last cider bar in London, for example, closed some five years ag6. Yates's is still with us, putting to shame the dismal 'wine bars' of London. Long may it flourish,