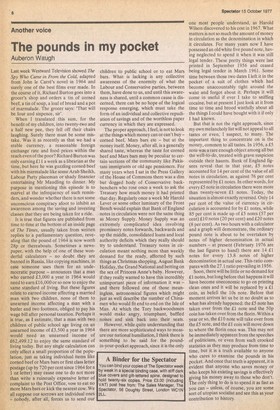 The pounds in my pocket

Last week Westward Television showed The Spy Who Came in From the Cold, adapted from John le Carre's novel in 1964 and surely one of the best films ever made. In the course of it, Richard Burton goes into a grocer's Shop and orders a tin of corned beef, a tin of soup, a loaf of bread and a pot of marmalade. The grocer says: 'That will be four and sixpence, sir'.

When I translated this sum, for the benefit of my children, into twenty-two and a half new pee, they fell off their chairs laughing. Surely there must be some mistake. Was it as recently as that we had a stable currency, a reasonable foreign exchange rate and food prices within the reach even of the poor? Richard Burton was only earning £11 a week as a librarian at the time, but here he was guzzling corned beef with his marmalade like some Arab Sheikh, Labour Party placeman or shady financier entertaining Mr Maudling to dinner. My purpose in mentioning this episode is to marvel at the infrequency of such reminders, and wonder whether there is not some unconscious conspiracy afoot to inhibit an awareness among the saving and investing classes that they are being taken for a ride.

It is true that figures are published from time to time at the bottom of an inside page of The Times, usually taken from written replies to a parliamentary question, revealing that the pound of 1964 is now worth 28p or thereabouts. Sometimes a newspaper, with the help of one of these wonderful calculators — no doubt they are banned in Russia, like copying machines, in case someone uses them for an undemocratic purpose — announces that a man who earned £3,000 a year in 1964 would need to earn £16,000 or so now to enjoy the same standard of living. But these figures relate to earned income affecting a married man with two children, none of them to unearned income affecting a man with a butler and two footmen, obliged to pay his wage bill after personal taxation. Perhaps it is true, as I estimate, that a man with two children of public school age living on an unearned income of £3,500 a year in 1964 would need an unearned income of £62,499.12 to enjoy the same standard of living today. But any single calculation can only affect a small proportion of the population, just as taking individual items like corned beef or Mars bars or first class letter postage (up by 720 per cent since 1964 for a 1 oz letter) may cause one to do not more than write a ruinously expensive letter of complaint to the Post Office, vow to eat no more Mars bars or kick the nearest cow. We all suppose our sorrows are individual ones — nobody, after all, forces us to send our children to public school or to eat Mars bars. What is lacking is any collective awareness of the enormity of what the Labour and Conservative parties, between them, have done to us, and until this awareness is shared, until a common cause is discerned, there can be no hope of the logical response emerging, which must take the form of an individual and collective repudiation of savings and of the worthless paper currency in which they are expressed.

The proper approach, I feel, is not to look at the things which money can or can't buy — corned beef, Mars bars etc — but at the money itself. Money, after all, is a generally shared taste, whereas the taste for corned beef and Mars bars may be peculiar to certain sections of the community like Pakistani immigrants or old age pensioners. For many years when I sat in the Press Gallery of the House of Commons there was a dim but dogged body of Conservative backbenchers who rose once a week to ask the Treasury how much money it had printed that day. Regularly once a week Mr Harold Lever or some other luminary of the Front Bench would explain that Bank of England notes in circulation were not the same thing as Money Supply. Money Supply was an extremely complicated idea involving promissory notes forwards, backwards and up the middle, consolidated loans and local authority deficits which they really should try to understand. Treasury notes in circulation meant nothing more than weekly demand for the ready, affected by such things as Christmas shopping, August Bank Holiday, the Grand National and betting on the sex of Princess Anne's baby. However, if they really wanted to have this incredibly unimportant piece of information it was — and there followed one of those meaningless, astronomical figures which might just as well describe the number of Chinamen who would fit end to end on the Isle of Man. At which the Tory backwoodsmen would make angry, triumphant, baffled noises and sink back into their seats.

However, while quite understanding that there are more sophisticated ways to measure our national humiliation, I think there is something to be said for the poundin-your-pocket approach, since it is the only IDA Binder for the Spectator 1 You can bind your copies of The Spectator week i y week In a special binding case, with stiff dark blue covers and gilt-lettered spine, designed to hold twenty-six copies. Price 23.00 (including, VAT) post free from: The Sales Manager, The Spectator, 56 Doughty Street, London WC1N

one most people understand, as Harold Wilson discovered to his cost in 1967. What matters is not so much the amount of money in circulation as the denomination in which it circulates. For many years now I have possessed an old white five pound note, having neglected to spend it when it was still legal tender. These pretty things were last printed in September 1956 and ceased being legal tender in March 1961, Some time between those two dates I left it in the pocket of a suit of clothes which had become unaccountably tight around the waist and forgot about it. Perhaps it will come in useful if ever I take to sniffing cocaine, but at present I just look at it from time to time and brood wistfully about all the things I could have bought with it if only I had known.

But that is not the right approach, since my own melancholy list will not appeal to all tastes or even, I suspect, to many. The important thing to concentrate on is the money, common to all tastes. In 1956, a5 note was a rare enough object among all but the well-to-do, treated with grave suspicion outside their haunts. Bank of England figures reveal that in that year, £5 notes accounted for 14 per cent of the value of all notes in circulation, as against 76 per cent represented by £1 notes. In other words, for every £5 note in circulation there were more than twenty-seven £1 notes. Today, the situation is almost exactly reversed. Only 14 per cent of the value of currency in circulation is accounted for by £1 notes, while 85 per cent is made up of £5 notes (57 per cent) £10 notes (20 per cent) and £20 notes (8 per cent). As two hours with a calculator and a graph will demonstrate, the ordinary pound note is about to be overtaken by notes of higher denomination in actual numbers — at present (February 1976 are the last figures to hand) there are 14 £1 notes for every 13.8 notes of higher denomination in actual use. This ratio compares with the 27.1 ratio prevailing in 1956.

Soon, there will be little or no demand for £1 notes, but long before that happens it will have become uneconomic to go on printing clean ones and it will be replaced by a £1 coin, as befell the 1 Os note. Before that moment arrives let us be in no doubt as to what has already happened: the £5 note has taken over from the £1 note and the 50p coin has taken over from the florin. Within a year or so, the £10 note will take over from the £5 note, and the £1 coin will move down to where the florin once was. This may not be immediately apparent from the speeches of politicians, or even from such crooked statistics as they may produce from time to time, but it is a truth available to anyone who cares to examine the pounds in his pocket. And once that truth is apparent, it is evident that anyone who saves money or who keeps his existing savings is effectively giving his money away to those who don't. The only thing to do is to spend it as fast as you can — unless, of course, you are some sort of utopian socialist and see this as your contribution to history.