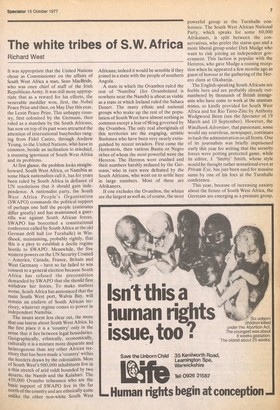 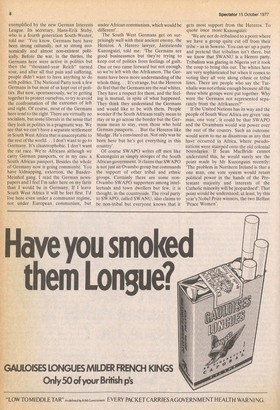 The white tribes of S.W. Africa

It was appropriate that the United Nations chose as Commissioner on the affairs of South West Africa a man, Sean MacBride, who was once chief of staff of the Irish Republican Army. It was still more appropriate that as a reward for his efforts, the venerable meddler won, first, the Nobel Peace Prize and then, on May Day this year, the Lenin Peace Prize. This unhappy country, first colonised by the Germans, then ruled as a mandate by the South Africans, has now on top of its past woes attracted the attention of international busybodies ranging from Fidel Castro, through Andrew Young, to the United Nations, who have in common, beside an inclination to mischief, a stunning ignorance of South West Africa and its problems.

At first glance, the problem looks straightforward. South West Africa, or Namibia as some black nationalists call it, has for years been ruled by South Africa in defiance of UN resolutions that it should gain independence. A nationalist party, the South West Africa People's Organisation (SWAPO) commands the political support of perhaps one half the people (estimates differ greatly) and has maintained a guerrilla war against South, African forces. SWAPO has boycotted a constitutional conference called by South Africa at the old German drill hall (or Turnhalle) in Windhoek, maintaining, probably rightly, that this is a ploy to establish a docile regime hostile to SWAPO. Meanwhile, the five western powers on the UN Security Council — America, Canada, France, Britain and West Germany — have so far failed to win consent to a general election because South Africa has refused the precondition demanded by SWAPO that she should first withdraw her forces. To make matters worse, South Africa has announced that the main South West port, Walvis Bay, will remain an enclave of South African territory, whatever regime comes to power in independent Namibia.

The issues seem less clear cut, the more that one learns about South West Africa. In the first place it is a 'country' only in the sense that it lies between legal boundaries. Geographically, ethnically, economically, culturally it is a mixture more disparate and heterogenous than any other African territory that has been made a 'country' within the borders drawn by the colonialists. Most of South West's 900,000 inhabitants live in a thin stretch of arid veldt bounded by two deserts, the Namib and the Kalahari. The 450,000 Ovambo tribesmen who are the basic support of SWAPO live in the far north of the country and are ethnically quite unlike the other non-white South West Africans; indeed it would be sensible if they joined in a state with the people of southern Angola.

A state in which the Ovambos ruled the rest of 'Namibia' (for Ovamboland is nowhere near the Namib) is about as viable as a state in which Ireland ruled the Sahara Desert. The many ethnic and national groups who make up the rest of the population of South West have almost nothing in common except a fear of being governed by the Ovambos. The only real aboriginals of this territories are the engaging, artistic Bushmen who have been very nearly extinguished by recent invaders. First came the Hottentots, then various Bantu or Negro tirbes of whom the most powerful were the Hereros. The Hereros were crushed and their numbers harshly reduced by the Germans,' who in turn were defeated by the South Africans, who went on to settle here in large numbers. Most of these are Afrikaners.

If one excludes the Ovambos, the whites are the largest as well as, of course, the most powerful group at the Turnhalle conference. The South West African National Party, which speaks for some 60,000 Afrikaners, is split between the conservatives, who prefer the status quo and a more liberal group under Dirk Mudge who want to risk joining an independent government. This faction is popular with the Hereros, who gave Mudge a rousing reception when he appeared a few months ago as guest of honour at the gathering of the Herero clans at Okahanja.

The English-speaking South Africans are feeble here and are probably already outnumbered by thousands of British immigrants who have come to work at the uranium mines, so kindly provided for South West Africa and for Rio Tinto-Zinc by Anthony Wedgwood Benn (see the Spectator of 19 March and 10 September). However, the Windhoek Advertiser, that passionate, some would say scurrilous, newspaper, continues to bash the administration on all fronts. One of its journalists was briefly imprisoned early this year for writing that the security forces were potting protected game, while its editor, J. `Smitty' Smith, whose style would be thought rather sensational even at Private Eye, has just been sued for massive sums by one of his foes at the Turnhalle conference.

This year, because of increasing anxiety about the future of South West Africa, the Germans are emerging as a pressure group, exemplified by the new German Interests League. Its secretary, Hans-Erik Staby, who is a fourth generation South-Wester, told me: 'You know, Germans here have been strong culturally, not so strong economically and almost non-existent politically. Before the war, in the thirties, the Germans here were active in politics but then the "thousand-year Reich" turned sour, and after all that pain and suffering, people didn't want to have anything to do with politics. The National Party took a few Germans in but most of us kept out of politics. But now, spontaneously, we're getting together to protect ourselves, to try to avoid the confrontation of the extremes of left and right. Of course, most of the Germans here tend to the right. There are virtually no socialists, but some liberals in the sense that they look at politics in a pragmatic way. We see that we can't have a separate settlement in South West Africa that is unacceptable to the rest of the world. . I don't want to go to Germany. It's claustrophobic. I don't want the rat race. We're Africans although we carry German passports, or in my case a South African passport. Besides the whole of Germany now, is going communist. You have kidnapping, extortion, the BaaderMeinhof gang. I read the German newspapers and I feel I'm safer here on my farm than I would be in Germany. If I leave South West Africa it will be feet first. I'd live here even under a communist regime, not under European communism, but under African communism, which would be different'.

The South West Germans get on surprisingly well with their ancient enemy, the Hereros. A Herero lawyer, Jariretenclu Kuzonguizi, told me: 'The Germans are good businessmen but they're trying to keep out of politics from feelings of guilt. One or two came forward but not enough, so we're left with the Afrikaners. The Germans have been more understanding of the whole thing. . . It's strange, but the Hereros do feel that the Germans are the real whites. They have a respect for them, and the feeling is mutual, in spite of what happened. They think they understand the Germans and would like to be with them. People wonder if the South Africans really mean to stay or to go across the border but the Germans mean to stay, even those who hold German passports. . But the Hereros like Mudge. He's convinced us. Not only was he born here but he's got everything in this country'.

Of course SWAPO writes off men like Kuzonguizi as simply stooges of the South African government. It claims that SWAPO is not just an Ovambo group but commands the support of other tribal and ethnic groups. Certainly there are some nonOvambo SWAPO supporters among intellectuals and town dwellers but few, it is thought, in the countryside. The rival party to SWAPO, called SWANU, also claims to be non-tribal but everyone knows that it gets most support from the Hereros. To quote bnce more 'Kuzonguizi: 'We are not de-tribalised to a point where we have a group quite cut off from their tribe — as in Soweto. You can set up a party and pretend that tribalism isn't there, but we know that SWANU is a Herero party. Tribalism was glaring in Nigeria yet it took the coup to bring this out. The whites here are very sophisticated but when it comes to voting they all vote along ethnic or tribal lines. There are people who say the Turnhalle was not ethnic enough because all the three white groups were put together. Why were the Germans not represented separately from the Afrikaners?'

If the United Nations has its way and the people of South West Africa are given 'one man, one vote', it could be that SWAPO and the Ovambans would win power over the rest of the country. Such an outcome would seem to me as disastrous as any that have occurred in Africa, *Where pseudonations were stamped onto the old colonial boundaries. If Sean MacBride cannot understand this, he would surely see the point made by Mr Kuzonguizi recently: 'The problem in Northern Ireland is that a one man, one vote system would retain political power in the hands of the Protestant majority and interests of the Catholic minority will be jeopardised'. That point would be understood, at least, by this year's Nobel Prize winners, the two Belfast 'Peace Women'.