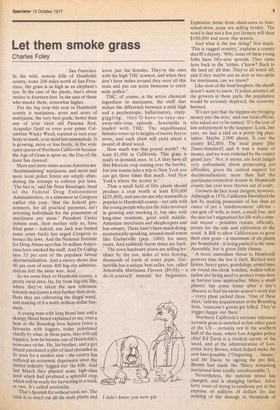 For the big crop this year in Humboldt county is marijuana, acres and acres of marijuana, the very best grade, better than any of your tired old Panama Red, Acapulco Gold or even your prime Colombian Wacky Weed, reputed to turn your body to mush, your mind into marmalade. It is growing, more or less freely, in the wide open spaces of Northern California because the Age of Grass is upon us; the Day of the Joint has dawned.

More and more states across America are 'decriminalising' marijuana, and more and more local police forces are simply abandoning the attempt to enforce pot laws. 'The fact is,' said Mr Peter Bensinger, head of the Federal Drug Enforcement Administration, in a statement to Congress earlier this year, 'that the federal government, for all practical purposes, isn't arresting individuals for the possession of marijuana any more.' President Carter (whose sons, their mother tells us, have tried grass — indeed, son Jack was busted some years back) has urged Congress to loosen the laws. And the National Institute for Drug Abuse says that 36 million Americans have smoked the stuff. And Dr Gallup says 53 per cent of the populace favour decriminalisation. And a survey shows that 60 per cent of some 400 big-city administrations feel the same way. And So we come back to Humboldt county, a pretty rural area, far, far from big-city life, where they've taken the new tolerance towards marijuana a step further than most. Here they are cultivating the illegal weed, and making of it a multi-million-dollar business.

A young man with long blond hair and a skimpy blond beard explained to me, over a bear at the Branding Iron Saloon (once a favourite with loggers, today populated chiefly by what, in these parts, they still call hippies), how he became one of Humboldt's nouveaux.riches. He, his brother, and a girl friend purchased a plot of land shrouded in fir trees for a modest sum — the county has suffered an economic depression since the timber industry 'logged out' the hills. And last March they planted some high-class seed which had produced a splendid crop which will be ready for harvesting in a week or two. It's called sensimilla.

'That's Spanish for without seed, see. The trick is to weed out all the male plants and leave just the females. They're the ones with the high THC content, and when they don't have males around they ooze all this resin and put out more blossoms to catch male pollen.'

THC, of course, is the active chemical ingredient in marijuana, the stuff that makes the difference between a mild high and a psychotropic, hallucinatory, crazygiggling, they'll-have-to-take-meaway-this-time episode. Sensimilla is loaded with THC. The unpollinated females tower up to heights of twelve feet or more, and each plant will yield about a pound of dried weed.

How much was that pound worth? 'At least £1,000 in California. This grass is really in demand, man. In LA they have all that Mexican crap coming over the border, but you wanna take a trip to New York you can get three times that much. And New York's where the money is.'

Thus a small field of fifty plants should produce a crop worth at least $50,000 (29,400), and one can see.why sensimilla is popular in Humboldt county not only with the young people who run the risks involved in growing and smoking it, but also with long-time residents, good solid middleAmerican merchants and shopkeepers and bar-owners. There hasn't been much doing, economically speaking, around small towns like Garberville (pop. 1000) for many years. And suddenly boom times are back. The town hardware stores are selling fertiliser by the ton, miles of wire fencing, thousands of yards of water pipes. Garberville has a unique best-seller, too, called Sensimilla Marijuana Flowers ($9.95) — a do-it-yourself manual for beginners. Expensive items from chain-saws to fourwheel-drive jeeps are selling briskly. The word is that not a few pot farmers will clear $100,000 and more this season.

• And what is the law doing? Not much. 'This is rugged country,' explains a county sheriff's deputy. 'Why, some of these young folks have fifty-acre spreads. They came here back in the 'sixties, y'know? Back to the land an' all that. They're all wired off, and if they maybe put an acre or two aside for marijuana, can we know?

Like most of the local burghers, the sheriff doesn't want to know. If police arrested all the growers in these parts, the population would be seriously depleted, the economy harmed.

'It's not just that the hippies are bringing money into the area,' said one local official, who asked not to be named. 'It's the cost of law enforcement to the taxpayer. Look, last year, we had a raid on a pretty big plantation. Maybe 2,000 plants. It cost the county $42,000. The local paper 'the Times-Standard] said it was a waste of money, and we were criticised by the county grand jury.' Nor, it seems, are local judges very enthusiastic about prosecuting pot offenders, given the current support for decriminalisation: more than half the marijuana-connected arrests in Humboldt county last year were thrown out of court.

Growers do face some dangers, however. Although in 1976, California liberalised the law by making possession of less than an ounce of pot a 'misdemeanour' offence — one gets off with, at most, a small fine, and the user isn't stigmatised for life with a criminal record — penalties remain, officially, severe for the sale and cultivation of the weed. A Bill to allow Californians to grow their own grass — a maximum of six plants per household — is being pushed in the state Assembly, but is given little chance.

A more immediate threat to Humboldt growers than the law is theft. Barbed wire fences, heavy gates, guard dogs, armed men on round-the-clock watches, walkie-talkie radios are being used to protect crops here as harvest time approaches. Many a small planter has come home after a day's absence to find his entire season's work lost — every plant picked clean. 'One of these days,' said my acquaintance at the Branding Iron, 'someone's gonna `get killed. They're trigger-happy out there.'

Northern California's extreme tolerance towards grass is matched in few other parts of the US — certainly not in the southern half of the state, where Los Angeles police chief Ed Davis is a virulent enemy of the weed, and of the administration of Governor Jerry Brown, which helped make the new laws possible. ('Disgusting . . . insane,' said Mr Davis: by signing the pot Bill, Brown had made the 'flimsy remaining marijuana laws totally unenforceable.') Nevertheless, the national mood has changed, and is changing further. After forty years of trying to eradicate pot at the expense of millions of dollars (to day nothing of the damage to thousands of