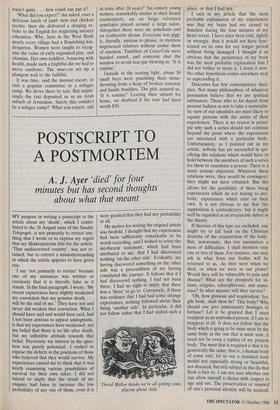 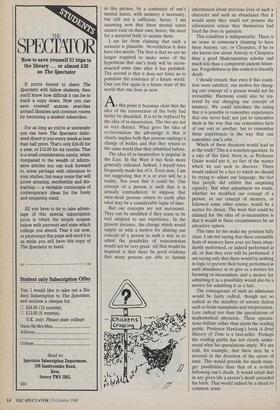 POSTSCRIPT TO A POSTMORTEM

minutes but has second thoughts about what that meant

MY purpose in writing a postscript to the article about my 'death', which I contri- buted to the 28 August issue of the Sunday Telegraph, is not primarily to retract any- thing that I wrote or to express my regret that my Shakespearian title for the article, 'That undiscovered country', was not re- tained, but to correct a misunderstanding to which the article appears to have given rise.

I say 'not primarily to retract' because one of my sentences was written so carelessly that it is literally, false as it stands. In the final paragraph, I wrote, 'My recent experiences have slightly weakened my conviction that my genuine death . . . will be the end of me.' They have not and never did weaken that conviction. What I should have said and would have said, had I not been anxious to appear undogmatic, is that my experiences have weakened, not my belief that there is no life after death, but my inflexible attitude towards that belief. Previously my interest in the ques- tion was purely polemical. I wished to expose the defects in the positions of those who believed that they would survive. My experiences caused me to think that it was worth examining various possibilities of survival for their own sakes. I did not intend to imply that the result of my enquiry had been to increase the low probability of any one of them, even if it

were granted that they had any probability at all.

My motive for writing the original article was twofold. I thought that my experiences had been sufficiently remarkable to be worth recording, and I wished to rebut the incoherent statement, which had been attributed to me, that I had discovered nothing 'on the other side'. Evidently, my having discovered something on the other side was a precondition of my having completed the journey. It follows that if I had discovered nothing, I had not been there; I had no right to imply that there was a 'there' to go to. Conversely, if there was evidence that I had had some strange experiences, nothing followed about their being 'another side'. In particular, it did not follow either that I had visited such a 'David Mellor thinks we're all getting com- placent about Aids.' place, or that I had not.

I said in my article that the most probable explanation of my experiences was that my brain had not ceased to function during the four minutes of my heart arrest. I have since been told, rightly or wrongly, that it would not have func- tioned on its own for any longer period without being damaged. I thought it so obvious that the persistence of my brain was the most probable explanation that I did not bother to stress it. I stress it now. No other hypothesis comes anywhere near to superseding it.

Descartes has few contemporary disci- ples. Not many philosophers of whatever persuasion believe that we are spiritual substances. Those who so far depart from present fashion as not to take a materialis- tic view of our identities are most likely to equate persons with the series of their experiences. There is no reason in princi- ple why such a series should not continue beyond the point where the experiences are associated with a particular body. Unfortunately, as I pointed out in my article, nobody has yet succeeded in spe- cifying the relations which would have to hold between the members of such a series for them to constitute a person. There is a more serious objection. Whatever these relations were, they would be contingent; they might not have obtained. But this allows for the possibility of there being experiences which do not belong to any- body; experiences which exist on their own. It is not obvious to me that this supposition is contradictory; but it might well be regarded as an irreparable defect in the theory.

If theories of this type are excluded, one might try to fall back on the Christian doctrine of the resurrection of the body. But, notoriously, this too encounters a mass of difficulties. I shall mention only one or two of them. For instance, one may ask in what form our bodies will be returned to us. As they were when we died, or when we were in our prime? Would they still be vulnerable to pain and disease? What are the prospects for in- fants, cripples, schizophrenics, and amne- siacs? In what manner will they survive?

'Oh, how glorious and resplendent, fra- gile body, shalt thou be!' This body? Why should one give unnecessary hostages to fortune? Let it be granted that I must reappear as an embodied person, if I am to reappear at all. It does not follow that the body which is going to be mine must be the same body as the one that is mine now; it need not be even a replica of my present body. The most that is required is that it be generically the same; that is, a human body of some sort, let us say a standard male model not especially strong or beautiful, not diseased, but still subject to the ills that flesh is heir to. I am not sure whether one can allow oneself a choice with respect to age and sex. The preservation or renewal of one's personal identity will be secured,

in this picture, by a continuity of one's mental states, with memory a necessary, but still not a sufficient, factor. I am assuming now that these mental states cannot exist on their own; hence, the need for a material body to sustain them.

I am far from claiming that such a scenario is plausible. Nevertheless it does have two merits. The first is that we are no longer required to make sense of the hypothesis that one's body will be recon- structed some time after it has perished. The second is that it does not force us to postulate the existence of a future world. One can live again in a future state of the world that one lives in now.

The idea of re-incarnation is popular in the East. In the West it has been more generally ridiculed. Indeed, I myself have frequently made fun of it. Even now, I am not suggesting that it is or ever will be a reality. Not even that it could be. Our concept of a person is such that it is actually contradictory to suppose that once-dead persons return to earth after what may be a considerable lapse of time.

But our concepts are not sacrosanct. They can be modified if they cease to be well adapted to our experience. In the present instance, the change which would supply us with a motive for altering our concept of a person in such a way as to admit the possibility of reincarnation would not be very great. All that would be required is that there be good evidence that many persons are able to furnish information about previous lives of such a character and such an abundance that it would seem they could not possess the information unless they themselves had lived the lives in question.

This condition is indispensable. There is no sense in someone's claiming to have been Antony, say, or Cleopatra, if he, or she knows less about Antony or Cleopatra than a good Shakespearian scholar and much less than a competent ancient histor- ian. Forgetfulness in this context is literally death.

Which of these decisions would lead us to the truth? This is a senseless question. In a case of this kind, there is, as Professor Quine would put it, no fact of the matter which we can seek to discover. There would indeed be a fact to which we should be trying to adjust our language; the fact that people did exhibit this surprising capacity. But what adjustment we made, whether we modified our concept of a person, or our concept of memory, or followed some other course, would be a matter for choice. The most that could be claimed for the idea of re-incarnation is that it would in these circumstances be an attractive option.

The consequence of such an admission would be fairly radical, though not so radical as the standbys of science fiction such as brain transplants and teleportation. Less radical too than the speculations of mathematical physicists. These specula- tions titillate rather than alarm the reading public. Professor Hawking's book A Brief History of Tune is a best-seller. Perhaps the reading public has not clearly under- stood what his speculations imply. We are told, for example, that there may be a reversal in the direction of the arrow of time. This would provide for much stran- ger possibilities than that of a re-birth following one's death. It would entail that in any given life a person's death preceded his birth. That would indeed be a shock to common sense.