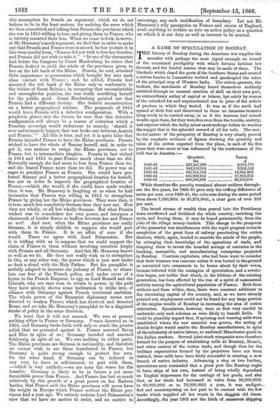 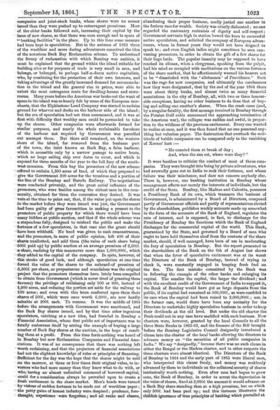 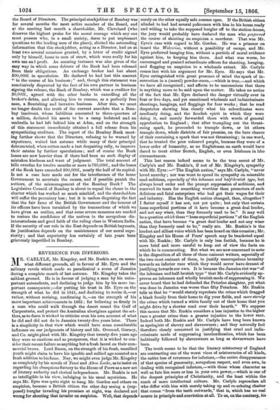 A GAME OF SPECULATION IN BOMBAY.

THE history of Bombay during the American war supplies the moralist with perhaps the most signal exa.inple on record of the occasional prodigality with which fortune lavishes her favours, and the fearful misuse that may be made of them. The blockade which closed the ports of the Southern States and created a cotton famine in Lancashire 'trebled and quadrupled the value of the principal crop of Western India. The -cotton-growers, the brokers, the merchants of Bombay found themselves suddenly enriched through no unusual exertion of akill - on their own part, no extraordinary outlay of capital or labour, but solely by reason of the unlooked-for and-unprecedented rise in price of the article of produce in which they traded. It was as if the earth had opened at their feet and discovered to them an immense treasure lying ready to be carried away, or as if the heavens bad rained wealth upon them, for they were free even from the trouble4 anxiety, and expense which the lucky miner must undergo. before he reaches the nugget that is the splendid reward of all his toils. The acci- dental nature of the prosperity of Bombay is very clearly proved by the emphatic evidence of figures showing the quantity and value of the cotton exported from the place, in each of the five years that were more or less influenced by the continuance of the civil war in America

• Financial Association, whose first public act of importance was to fatally embarrass itself by setting the example of buying a large number of Back Bay shares at the auction, in the hope of resell- ing them at a profit. From this time forth nothing was heard of in Bombay but new Reclamation Companies and Financial Asso- ciations. It was of no consequence that there was nothing left ' -Worth reclaiming, and that the projectors of financial associations had not the slightest knowledge of rules or principles of financing. Sufficient for the day was the hope that the shares might be sold on the morrow, at three or four times their original value, to in- vestors who had more money than they knew what to do with, or who, having an almost unlimited command of borrowed capital, could for a consideration always be prevailed upon to create a fresh excitement in the share market. Men's heads were turned by visions of sudden fortunes to be made out of worthless paper ; the petty gains of honest industry were despised ; prudence, fore- thought, experience were forgotten ; and all ranks and classes, abandoning their proper business, madly jostled one another in the furious race for wealth. Society was utterly dislocated ; no one regarded the customary restraints of dignity and self-respect ; Government servants high in station bowed the knee to successful native speculators, and solicited the company of European adven- turers, whom in former years they would not have deigned to speak to ; and even English ladies might sometimes be seen can- vassing promoters, in order to obtain the gift of a few shares for their liege lords. The popular insanity may be supposed to have reached its climax, when a clergyman, speaking from the pulpit, had his mind so occupied with meditations on the various fortunes of the share market, that he affectionately warned his hearers not to be "dissatisfied with the 'allotments' of Providence." Such was the rage for new companies, and ultimately the carelessness how they were designated, that by the end of the year 1864 there were about thirty banks, and almost twice as many financial associations in the city of Bombay, all, with two or three honour- able exceptions, having no other business to do than that of buy- ing and selling one another's shares. When the crash came (and, by a singular fatality, the first message received in Bombay through the Persian Gulf cable announced the approaching termination of the American war), the collapse was sudden and awful, in propor- tion to the wildness of the previous excitement. Every one wanted to realize at once, and it was then found that no one possessed any- thing but valueless paper. The destruction that overtook the mul- titude of bubble companies can be compared only to the vanishing of Xerxes' host :— "He counted them at break of day ; And, when the sun set, where were they?"

It were bootless to criticize the conduct of most of these com- panies. They were brought into being by private adventurers, who had avowedly gone out to India to seek their fortunes, and whose failure *as their 'mischance, and does ' not concern anybody else. There is, however, one banking institution in Bombay -whose management affects not merely the interests of individuals, but the credit of the State. Bombay, like Madras and Calcutta, possesses a Presidency Bank of its own, which transacts the business of Government, is administered by a Board of Directors, composed partly of Government officials and partly of representatives elected by the shareholders, publishes weekly accounts made up somewhat in the form of the accounts of the Bank of England, regulates the rate of interest, and is supposed, in fact, to discharge for the Presidency of Bombay the functions which the Bank of England discharges for the commercial capital of the world. This Bank, giaranteed by the State, and governed by a Board of men who ought to have held themselves aloof from the contests of the share market, should, if well managed, have been of use in -moderating the fury of speculation in Bombay. But the report presented to the shareholders of the Bank on the 6th of August last shows that when the fever of speculative excitement was at its worst the Directors of the Bank of Bombay, instead of trying to check it, were constantly engaged in heaping fresh fuel an the fire. The first mistake cOminitted by the Bank was in following the example of the other banks and enlarging its capital. The smaller the capital, the larger the dividend ;*and with the excellent credit of the Government of India to support it, the Bank of Bombay would have got as large deposits from-the public, if its capital had remained at 500,000/., as were confided to its care when the capital had been raised to 2,000,0001.; nor, in the former case, would there have been any neeessity for the Directors to undertake highly speculative business in order to keep their dividends at the old level. But under the old charter the Bank could not in any case have meddled with such business. New charters were, however, granted by the local Councils to all the three State Banks in 1862-63, and the framers of the Bill brought before the Bombay Legislative Council designedly introduced a clause into the charter of the local banks allowing the directors to advance money on "the securities of all public companies in India." We say "designedly," because there was no such clause in either the Bengal or the Madras charter, and in other respects the three charters were almost identical. The Directors of the Bank of Bombay in 1864 and the early part of 1865 were liberal men, who interpreted this clause freely, and money -was recklessly advanced by them to individuals on the collateral security of shares intrinsically worth nothing. Even after men' had begun to grow sane, the Bank of Bombay, in order to arrest the depreciation in the value of shares, fixed at 2,0001. 'the amount it would advance on a Back Bay share standing then at a high premium, but on which only 500/. had been paid up ; and this 'instance illustrates the childish ignorance of-true principled of banking which prevailed at

the Board of Directors. The principal stockjobber of Bombay was for several months the most active member of the Board, and at the meeting last month a shareholder, Mr. Cleveland (who deserves the highest praise for the moral courage which any one must possess who, in a small society, dares to put unpleasant

questions to the leading men of the place), elicited the astounding information that this stockjobber, acting as a Director, had on at least two several occasions granted, by a letter of credit signed only by himself, loans to men of straw, which were really for his own use sal profit. An amusing instance was also given of the easy way in which some debtors of the Bank had been released from their obligations. An exchange broker had lost about 500,0001. in speculation. He declared he had lost this amount "in the course of his business ; " and, though this statement was conclusively disproved by the fact of his own partner in business signing the release, the Bank of Bombay, which was a creditor for 30,000/., agreed with the other banks in cancelling all the broker's debts, and allowing him to resume, as a perfectly free man, a flourishing and lucrative business. After this, we must no longer doubt the truth of the current anecdote that a Bom- bay insolvent, whose liabilities amounted to three-quarters of a million, declared his assets to be a camp bedstead and an umbrella he had left behind him at Aden, and on the strength of this statement immediately obtainei a full release from his sympathizing creditors. The report of the Bombay Bank meet- ing further shows that the Directors, refusing to be warned by experience, waited last autumn while many of their principal debtors tried, when cotton made a last despairing rally, to improve their estates by further speculations ; and of course the Bank losses are now heavier than if there had been no such display of mistaken kindness and want of judgment. The total amount of bills overdue for twelve months or more is 760,000/., and the losses of the Bank have exceeded 900,0001., nearly the half of its capital. Is not a case here made out for the interference of the home Government to ascertain the causes, and if possible punish the authors, of the mismanagement of the Bombay Bank? The Legislative Council of Bombay is about to repeal the clause in the charter which has worked so much mischief, and the shareholders will suffer the pecuniary loss ; but it is useless disguising the fact that the fair fame of the British Government and the honour of its officers have been tarnished by the transactions of which we have given an outline, and that some severe measures are needed to restore the confidence of the natives in the scrupulous dis- interestedness and good faith of the ruling class in Western India. If the security of our rule in the East depends on British bayonets, its justification depends on the maintenance of our moral supe- riority; and that superiority has certainly of late years been grievously imperilled in Bombay.