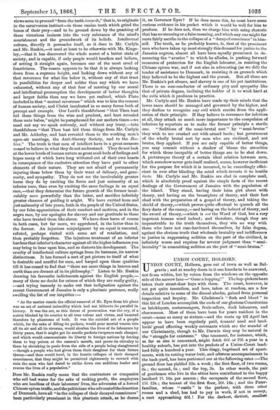 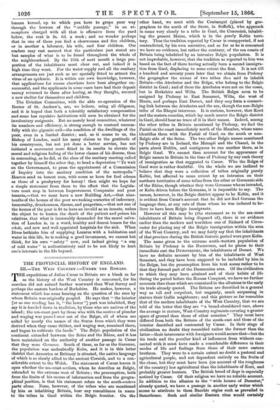 UNION COURT, Holborn, goes out of town as well as Bel- gravia; and at sundry doors in it one knocks to be answered, not from within, but by voices from the windows on the opposite side of the narrow lane—" Gone a hopping!" The hop-pickers have taken their street-door keys with them. The court, however, is not yet quite tenantless, and here, taken at random, are a few details relative to some of the dismal abodes, gained from personal inspection and inquiry. Mr. Gladstone's "flesh and blood" in this bit of London accomplish the ends of our glorious Constitution as bricklayers, costermongers, fruit-sellers, dock labourers, and charwomen. Most of them have been for years resident in the court—some as many as sixteen—and the rents up till April last appear to have been regularly paid, tenants' need and land- lords' greed effecting weekly covenants which are the scandal of our Christianity, though to Mr. Darwin they may be natural in the "struggle for existence." One tenement, for instance, which, as far as size is concerned, might fetch 60/. or 701. a year in a healthy suburb, has put into the pockets of a Union-Court land- lord fully a hundred a year. This dingy, begrimed set of apart- ments, with its rotting water-butt, and odorous accompaniments in the back-yard, has been portioned out at the following rates :—The ground floor has yielded 22s. a week ; the first floor, of two rooms, Ss.; the second, 6s. ; and the top, Ss. In other words, the pair of gentlemen who live in the attics have contributed to the happy landlord 71. 16s. per annum ; the occupants of the second floor, 15/. 12s.; the tenant of the first floor, 20/. 16s.; and the Pater- familias, whose " castle " is the parlour, with three other rooms and a shed, has had to pay in work, if not in money, a rent approaching 601.1 For the darkest, dirtiest, smallest

human kenuel, up to which you have to grope your way through the horrors of the "middle passage," in an at- mosphere charged with all that is offensive from the yard below, the rent is 2s. 6d. a week ; and no wonder perhaps that in one of these you find a charwoman and five children, or in another a, labourer, his wife, and four children. Our readers may rest assured that the particulars just stated are but samples of what is to be found throughout the whole of the neighbourhood. By the 25th of next month a large pro- portion of the inhabitants must clear out, and indeed it is high time they went. For the water supply and all the sanitary arrangements are just such as are specially fitted to attract the virus of an epidemic. It is within our own knowledge, however, that applications for rooms elsewhere have been altogether on- successful, and the applicants in some cases have had their deposit money returned to them after having, as they thought, secured a new shelter for themselves and children.

The Eviction Committee, with the able co-operation of the Rector of St. Andrew's, are, we believe, using all diligence, and it is hoped that both a tolerably satisfactory compensation and some less repulsive habitations will soon be obtained for the involuntary emigrants. But no merely local committee, whatever its numbers and efficiency, is strong enough to contend success- fully with the gigantic evil—the condition of the dwellings of the poor, even in a limited district ; and, as it seems to us, the Bishop of London, amid his many claims to the gratitude of his countrymen, has not yet done a better service, has not initiated a movement more fitted in its results to elevate the moral and religious feeling of the lower classes of his diocese, than in consenting, as he did, at the close of the sanitary meeting called together by himself the other day, to head a deputation "To wait on the Government, to press the appointment of a Commission of Inquiry into the sanitary condition of the metropolis." Heaven send us honest men, with noses as keen for foul odours as those of a presbytery for heresy! then might we hope for a simple statement from them to the effect that the Legisla- ture must step in between Improvement Companies and poor tenants,—that we must have a new Building Act,—that nine- tenths of the houses of the poor are reeking nurseries of indecency, immorality, drunkenness, disease, and pauperism,—that not one of the houses of the poor is fit to have an invalid as an inmate, unless the object be to hasten the death of the patient and poison his relatives, that what is inexorably demanded for the moral salva- tion of London is, in a word, healthy and decent homes for the whole, and new and well appointed hospitals for the sick. When Dives bethinks him of supplying Lazarus with a habitation and water in this life, he is making a good investment, we cannot but think, for his own " safety " now, and indeed giving "a cup of cold water" is authoritatively said to be not likely to hurt one's interests in the life beyond.