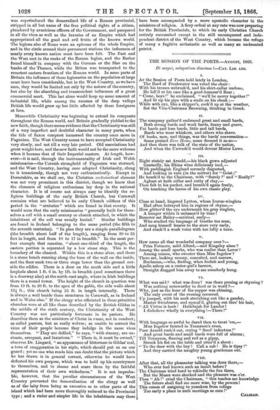 AT the Session of Poets held lately in London,

The Bard of Freshwater was voted the chair : With his tresses unbrush'd, and his shirt-collar undone, He loll'd at his ease like a good-humour'd Bear ; "Come, boys !" he exclaimed, "we'll be merry together !" And lit up his pipe with a smile on his cheek ;— While with eye, like a skipper's, cock'd up at the weather, Sat the Vice-Chairman Browning, thinking in Greek.

The company gather'd embraced great and small bards, Both strong bards and weak bards, funny and grave, Fat bards and lean bards, little and tall bards, Bards who wear whiskers, and others who shave.

Of books, men, and things, was the bards' conversation—

Some praised Ecce Homo, some deemed it so-so— And then there was talk of the state of the nation, And when the Unwash'd would devour Mister Lowe.

Right stately sat Arnold,—his black gown adjusted Genteelly, his Rhine wine deliciously iced, — With puddingish England serenely disgusted, And looking in vain (in the mirror) for "Geist ;" He heark'd to the Chairman, with "Surely I" and "Really?"

Aghast at both collar and cutty of clay,—

Then felt in his pocket, and breath'd again freely, On touching the leaves of his own classic play.

Close at hand, lingered Lytton, whose Icarus-winglets Had often betrayed him in regions of rhyme,— How glitter'd the eye underneath his grey ringlets, A hunger within it unlessen'd by time !

Who studied the language of Goethe too soon, And sang himself hoarse to the stars very early, And crack'd a weak voice with too lofty a tune.

How name all that wonderful company over ?— Prim Patmore, mild Alford,—and Kingsley alsoe ? Among the small sparks, who was mailer than Lover?

Among misses, who sweeter than Miss Ingelow? There sat, looking moony, conceited, and narrow, Buchanan,—who, finding, when foolish and young, Apollo asleep on a coster-girl's barrow, Straight dragged him away to see somebody hung.

What was said? what was done? was there prosing or rhyming?

Was nothing noteworthy in deed or in word ?— Why, just as the hour of the supper was chiming, The only event of the evening occurred. Up jumped, with his neck stretching out like a gander, Master Swiuburne, and squeal'd, glaring out thro' his hair, "All Virtue is bosh ! Hallelujah for Landor !

I disbelieve wholly in everything !—There !"

With language so awful he dared then to treat 'em,— Miss Ingelow fainted in Tennyson's arms, Poor Arnold ru.sh'd out, crying " Sceer inficetum!" And great bards and small bards were full of alarms ; Till Tennyson, flaming and red as a gipsy, Struck his fist on the table and utter'd a shout : "To the door with the boy! Call a cab ! He is tipsy !" And they carried the naughty young gentleman out.

After that, all the pleasanter talking was done there,—

Who ever had known such an insult before ?

The Chairman tried hard to rekindle the fun there, But the Muses were shocked and the pleasure was o'er.

Then "An !" cried the Chairman, "this teaches me knowledge The future shall find me more wise, by the powers !