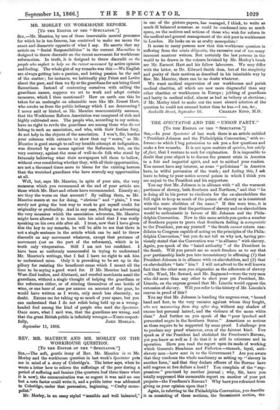 MR. MORLEY ON WORKHOUSE REFORM. [To THE EDITOR OF THE

Sin,—Mr. Maurice, by one of those inscrutable mental processes for which he is too famous, has contrived to make me mean the exact and diametric opposite of what I say. He asserts that my article on "Social Responsibilities" in the current Macmillan is designed to throw discredit on the recent movement for workhouse reformation. In truth, it is designed to throw discredit on the people who neglect to help on the recent movement by active opinion and feeling. The whole gist of my remarks was this :—We English are always getting into a passion, and letting passion be the end of the matter ; for instance, we habitually play Priest and Levite about the poor, and then we fly at the guardians for not being Good Samaritans. Instead of contenting ourselves with calling the guardians names, suppose we set to work and adopt certain measures, which I then mentioned? How on earth can this be taken for an onslaught on admirable men like Mr. Ernest Hart, who awoke us from the public lethargy which I am denouncing ? I never said or hinted, as Mr. Maurice unaccountably assumes, that the Workhouse Reform Association was composed of rich and highly cultivated men. The people who, according to my notion, have no right to revile the guardians are among those who do not belong to such an association, and who, with their fustian fury, do not help in the objects of the association. I won't, Sir, burden your columns with extracts to show that my "acorn," as Mr. Maurice is good enough to call my humble attempt at indignation, was directed by no means against the Reformers, but, on the very contrary, against the mass of well-to-do folk who stand by fatuously bellowing what their newspapers tell them to bellow, without ever considering whether they, with all their opportunities, are not a thousand times more to blame for the existing horrors than the wretched guardians who have scarcely any opportunities at all.

Well, but, says Mr. Maurice, in spite of your airs, the very measures which you recommend at the end of your article are those which Mr. Hart and others have recommended. Exactly so ; are they the worse on that account ? By calling them, as Mr. Maurice sneers at me for doing, " obvious " and "plain," I was surely not going the best way to work to get myself credit for originality or profundity. And in any case, finding me advocating the very measures which the association advocates, Mr. Maurice might have allowed it to loom into his mind that I was really speaking on his own side after all. I trust, now that I have given him the key to my remarks, he will be able to see that there is not a single sentence in the article which can be said to throw discredit on any movement whatever, except that pretence of movement (not on the part of the reformers), which is in truth only vituperation. Still I am not too confident. I have been so uniformly unsuccessful in trying to understand Mr. Maurice's writings, that I feel I have no right to ask him to understand mine. Only it is provoking to be set up in the pillory for resisting the beneficent cause which I meant all the time to be saying a good word for. If Mr. Maurice had heard West-End loafers, and dilettanti, and overfed merchants assail the guardians, without a single thought of helping the guardians or the reformers either, or of stinting themselves of one bottle of wine, or one hour of ease per annum on account of the poor, he would have written as I wrote, only much leas obscurely, no doubt. Excuse me for taking up so much of your space, but you can understand that I do not relish being held up as a wrong- headed fool among the kind of people who read the Spectator. Once more, what I said was, that the guardians are wrong, and that the great British public is infinitely wronger.—Yours respect-