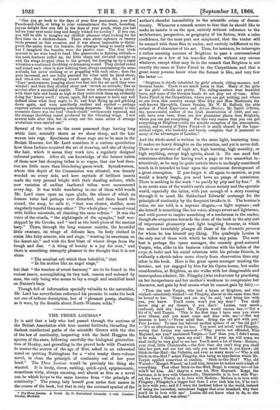 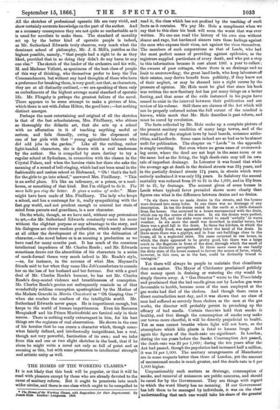 IT is said that a lady who had passed through the sections of the British Association with true mental fortitude, threading the darkest intellectual paths of the scientific Groves with the clue of the law of continuity, inspecting with the lucid Huggins the spectra of the stars, following carefully the biological generaliza- tion of Huxley, and grovelling in the gravel beds with Prestwich to master the secrets of the age of flint, asked in an exhausted mood on quitting Nottingham for a "nice trashy three-volume novel, to clean the principle of continuity out of her poor head." The Three Louisas would be precisely the thing she wanted. It is lively, clever, rattling, quick-eyed, epigrammatic, sometimes witty, always amusing, and almost as free as a novel can be which keeps to the same heroine from "the principle of continuity." The young lady herself goes under four names in -the course of the book, but that is only the outward symbol of the • The Three Louisa:. A Novel. By H. Sutherland Edwards. 8 vols. London: Tinsley, Brothers.

author's cheerful insensibility to the scientific crime of discon- tinuity. Whenever a remark occurs to him that he should like to make he inserts it on the spot, entirely without reference to the architecture, perspective, or geography of his fiction, with a calm confidence, for the most part not misplaced, that the reader will be amused with these flies in amber, and entirely indifferent to the cataclysmal character of his art. Thus, for instance, he interrupts. a rather amusing account of Brighton to pass a conversational panegyric on a few of his traveller friends without any excuse whatever, except what may lie in the remark that Brighton is not exactly the same as Tatra Fiired in the Carpathians, and that a great many persons know what the former is like, and very few the latter :-

"Brighton is chiefly inhabited by girls' schools, riding-masters, and German bands. There is not much harm in that. Many of the girls at the girls' schools are pretty. The riding-masters wear beautiful boots, and some of the German bands do not play out of tune. After Tatra Fared in the Carpathians, where you can get nothing, and where no one from this country except Miss Irby and Miss Mackenzie, the well known Slavophils, Canon Stanley, Mr. W. H. Bullock, the able- author of Polish Experiences and Across Mexico; Mr. Smith O'Brien, the unsuccessful author of the Irish insurrection of 1848, and my- self, have ever been, there are few pleasanter places than Brighton, where you can get everything. For this very reason that you can get everything at Brighton—with the notable exception of the atmosphere, society, and scenery of Tatra Fiired—it is much abused by the hypo- critical vulgar, who foolishly and basely complain that it possesses se many of the advantages of London."

And the whole novel is written in the same light, bantering tone. It makes no heavy draughts on the attention, and yet is never dull. There is no pretence of high art, high learning, high morality, or- high anything, except high spirits, about it. No one need feel conscience-stricken for having read a page or two somewhat in- attentively, as he may be quite certain there is no deeply considered touch in it intended to bear upon the continuous development of a great conception. If you forget it all again to-morrow, as you would a hearty laugh, you need have no pangs of conscience. There is nothing in the work "to purify by pity and by fear." It. is an acute man of the world's rattle about society and the operatic world, especially the latter, with just enough of a story running through it to mark Mr. Sutherland Edwards' contempt for the principle of continuity by the frequent breaks in it. The heroine's voice, we are told, is a soprano sfogato,—a light soprano ; and she herself is something like her voice, always sweet and lightsome, and with power to inspire something of a tenderness in the reader, though she evaporates towards the close of the book in the airy sort of impersonal pleasantry and light laughing humour, in which the author invariably plunges all those of his dramatis persona for whom he has himself any liking. The quadruple Louisa is the only one of them with which he takes any pains. The next best is perhaps the opera manager, the coarsely good-natured Turpin, who, alike in his business relations with the ladies of the corps de ballet and his social relations with his private friends, is. evidently a sketch taken more closely from observation than any other in the book. Here is the great opera manager meeting the heroine, not yet engaged by him for his Opera-house, but under consideration, at Brighton, as she walks with her disagreeable and unscrupulous admirer, Mr. Flingsby (who endeavours by practising on her inexperience and her mother's weakness to compromise her character, and gain by foul means what he cannot gain by fair) :— " Then she met Turpin, who had a house at Brighton, and whe winked—absolutely winked !—at Flingsby, almost at the same time that

he bowed to her. Come and see me,' he said, and bring her with you, you know. You'll come, won't you my dear ? You shall never sing at my theatre if you don't.' Louisa, very much., confused, said she hoped ifr. Turpin would excuse hen—' Not a bit of it,' said Turpin. This is the first time I have seen you since- your illness, and you must come and dine with me.'—'But my mamma is here.'—' Never mind that. Bring the old girl with you.' Poor Louisa! To hear her beloved mother spoken of as the old girl

It's an affectionate way he has. You must not mind,' said Flingsby, seeing that Louisa was annoyed.—'Why, you're not offended, Miss Maynard, are you?' exclaimed Turpin.--' Lor' bless you, I didn't mean to be rude. I didn't, upon my soul ! But if your ma will come, we shall really be very glad to see her. You'll meet a lot of them : Medora your rival, little Chanterelle,—the first time she can't sing you shall take her part, and cut her out, only you must learn it, you know ; old Stick-in-the-Mud ; the Velletris, and ever so many more.'—' Who is old Stick-in-the-Mud ?' asked Flingsby, this being an appellation which Mr. Turpin applied somewhat at random. Stick-in-the-Mud? Why, old Wurzel—' Mangel-Wurzel,' as I call him, because he makes such a hash of everything. That other Stick-in-the-Mud, Boppi, is coming too—if his wife'll let him. Ah! they're a ram lot, Miss Maynard. Boppi, the baritone, is in love with Chanterelle ; Chanterelle is in love with Wur- zel, the tenor • Wurzel is in love with Madera; Madera is in love with Flingsby ; Flingsby's a bigger fool than I ever took him for, if he isn't in love with you; and if I were the luckiest fellow in the world, instead of being the cursedest, unluckiest beggar that ever breathed, why then you'd be in love with me.' Louisa did not know what to do, so she looked foolish, and was silent."

All the sketches of professional operatic life are very vivid, and show certainly accurate knowledge on the part of the author. And as a necessary consequence they are not quite so uncharitable as it is usual for novelists to make them. The standard of morality set up by the better kind of operatic people is indeed, as Mr. Sutherland Edwards truly observes, very much what the dominant school of philosophy, Mr. J. S. Mill's, justifies as the highest possible, namely, "that people had a right to do as they liked, provided that in so doing they didn't do any harm to any one else." The sketch of the leader of the orchestra and his wife, M. and Madame Velletri, as specimens of the best class of people of this way of thinking, who themselves prefer to keep the Ten Commandments, but without any hard thoughts of those who have a preference for breaking them, is very good; not that, as characters, they are at all distinctly outlined,—we are speaking of them only as embodiments of the highest average moral standard of operatic life. Mr. Flingsby is perhaps the greatest failure of the novel. There appears to be some attempt to make a picture of him, which there is not with Julian Hilton, the good hero ;—but nothing distinct emerges.

Perhaps the most entertaining and original of all the sketches is that of the fast schoolmistress, Mrs. FitzHenry, who abhors so thoroughly the didactic art, that she sets up a school with no affectation in it of teaching anything useful or serious, and fails dismally, owing to the elopement of one of her girls with that "young agricultural labourer who did odd jobs in the garden." Like all the rattling, rather light-headed characters, she is drawn with a real tenderness by the author. She is compelled by stern destiny to try a regular school at Sydenham, in connection with the classes in the Crystal Palace, and when the heroine visits her there she asks the meaning of a sound of bell-ringing, which had not been usual in the fashionable and useless school at Richmond, " Oh I that's the bell for the girls to go into school," answered Mrs. Fitzflenry. "This is an awful place. It's like an infirmary, or a prison, or a mad- house, or something of that kind. But I'm obliged to do it. The more bells you ring the better. It gives a notion of order." More might have been made of Mrs. FitzHenry. The lady who keeps a school, and has a contempt for it, really sympathizing with the fast gay world, and not prudent enough to conceal her state of mind from parents and guardians, is a new character.

On the whole, though, as we have said, without any pretensions to art,—for Mr. Sutherland Edwards constantly varies his scene without the slightest purpose or any advantage to the story, and his dialogues are clever random productions, which rarely advance at all either the development of the plot or the delineation of eharacter,—the novel before us is as amusing a production as we have read for many months past. It has much of the conscious intellectual impudence of Mr. Charles Reade ; and Mr. Edwards sometimes draws out the absurdities of his characters in a series of mock-formal theses very much indeed in Mr. Reade's style, —as, for instance, in the account of what Mrs. Maynard's friends said to her when they came like Job's comforters to console her on the loss of her husband and her fortune. But with a good deal of Mr. Charles Reade's humour, he has not Mr. Charles Reade's deep-seated violence and breathlessness of conception. Mr. Charles Reade's genius not unfrequently reminds us of that wonderfully sublime conception apostrophized by the Mother of the Modern Gracchi in Martin Chuzzlewit as "Oh Gasping One !" when she reaches the confines of the intelligible world. Mr. Sutherland Edwards never gasps. He is impertinent enough, but keeps to the world of human impertinences. Even his Baroness Roupinkoff and his Prince Muchtofriski are farcical only in their names.. There is nothing really extravagant in him, for his best things are the registers of real observation. He shows in the case of his heroine that he can create a character which, though some- what faintly defined, and intellectually insignificant, has a real, though not very powerful, fascination of its own ; and we infer from this and one or two slight sketches in the book, that if he chose he might write a novel not only as full of point and as amusing as this, but with some pretension to intellectual strength and artistic unity as well.