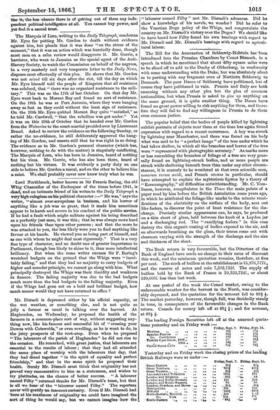 Page 3, 15 September 1866 — Mr. Disraeli is depressed either by his official capacity, or
Close

Mr. Disraeli is depressed either by his official capacity, or

the wet weather, or something else, and is not quite so jolly a farmer as usual in talking over the harvest. At Hughenden, on Wednesday, he • proposed the health of the farmers in a common-place sort of way, without suggesting any- thing new, like his famous and successful hit of "crossing your Downs with Cotswolds," or even revelling, as he is wont to do, in the juicy prospects of the root-crop. Even when he proposed 4‘ The labourers of the parish. of Hughenden" he did not rise to -the oceation. He remarked, with great justice, that labourers are -essential to the results of labour ; that they had all attended the same place of worship with the labourers that day, that they had dined together "in the spirit of equality and perfect friendship," and that in the same spirit he proposed their -health. Surely Mr. Disraeli must think that originality has not proved very remunerative to him as a statesman, and wishes to try platitudes, on the chance of better success. "A labourer nulled Filby " returned thanks for Mr. Disraeli's toast, but that is all we hear of the "labourer named Filby." The reporters never will gratify.= innocent curiosity. Even if Mr. Disraeli had been at his maximum of originality we could have imagined the sort of thing he would say, but we cannot imagine how the "labourer named Filby " met Mr. Disraeli's advances. Did he show a knowledge of his novels, -we wonder? bid he refer to the Venetian Doge policy of the Whigs, and congratulate the =Unity on Mr. Disraeli's Videry over the Doges ? We to have heard how Filliy found his own bearings with regard to Mr. Disraeli and Mr. Disraeli's bearings with regard to agricul- tural labour.