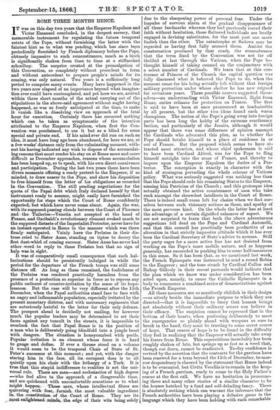 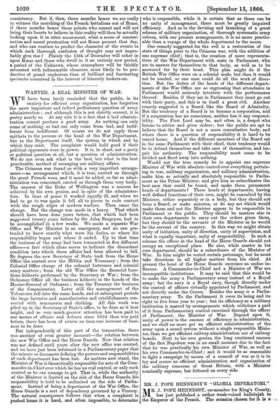 IT was on this day two years that the Emperor Napoleon and Victor Emanuel concluded, in the deepest secrecy, that memorable instrument for regulating the future temporal estate of the Pope, without furnishing the latter with the faintest hint as to what was pending, which has since been periodically flourished by French diplomacy before the Pope, obtusely impassive to such remonstrances, much as a birch is significantly shaken from time to time at a stiffnecked schoolboy. The surprise created at the promulgation of this Convention, so completely without precedent in form and without antecedent to prepare people's minds for its coming, was only natural. Two years is a sufficiently long period to comprise many events. Many have happened in the two years now elapsed of an importance beyond what imagina- tion ever could have contemplated, and yet here we are, arrived within three short months of the actual carrying out of the stipulations in the above-said agreement without aught having happened, as was so freely anticipated at the time, to make it vanish like a dissolving view on approach of the fatal hour ,for execution. Certainly there has occurred nothing which can be taken as. symptomatic of the intention attributed to the Emperor Napoleon, when first the Con- vention was proclaimed, to use it but as a blind for some special and private end. If his mind ever did run on such an idea, it must have long age been abandoned, for here we are, at a few weeks' distance only from the culminating moment, with- out his having indicated any wish to dispose of the accumulat- ing reasons that must render his stay on at Rome more and more difficult as December approaches, reasons whose accumulation has been heaped:up, so to speak, with his own direct connivance and participation. During the last two years there have been divers moments offering a ready pretext to the Emperor, if so minded, to draw nearer to the. Pope, and show his disposition to free himself from the letter of his obligations as recorded in the Convention. The still pending negotiations, for the quota, of the Papal debt which Italy declared herself by that instrument ready to assume, might easily have furnished the opportunity for steps :which the Court of Rome confidently expected( but which have never come about. Again, the war, with its supposed, passing clouds between the Court of Florence and the. Tuileries—Venetia not accepted at the hand of France, 04311 Gfaribahli's revolutionary element evoked much to the supposed distaste of the Imperialist Protector, never have for an instant operated in Rome, in the manner which was there firmly anticipated. Vainly have the Prelates in their dis- tress cried to Sister Anne, standing on tiptoe to descry the first dust-whirl, of coming succour. Sister Anne has never had other,avord to reply to these Prelates but that no sign of help waa in. sight.

consistency. But if, then, three months hence we are really to witness the marching of the French battalions out of Rome, if three months hence those priests who cannot and will not bring their hearts to believe in this reality will then be actually looking upon it in utter amazement, what a scene of conster- nation and moral prostration will not Rome present that day, and who can venture to predict the character of the events to which such thorough confusion of thought may not impro- bably give rise? Plainly the 15th of December will usher in upon Rome and those who dwell in it an entirely new period, a period of the Unknown, whose atmosphere will be thickly seturated with inflammable elements, more likely to be pro- ductive of grand explosions than of brilliant and fascinating spectacles conceived in the interest of leisurely lookers-on.