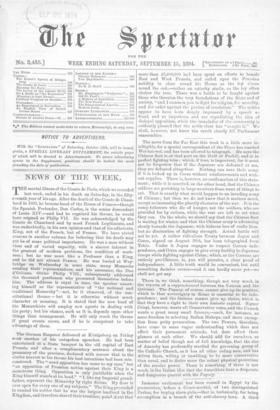 Page 1, 15 September 1894 — The German Emperor delivered at Konigsberg on Friday week another
Close

The German Emperor delivered at Konigsberg on Friday week another

of his outspoken speeches. He had been entertained at a State banquet in the old capital of East Prussia, and after a complimentary sentence about the peasantry of the province, declared with sorrow that in the circles nearest to his throne his best intentions had been mis- construed. The " word opposition has come to my ears," but "an opposition of Prussian nobles against their King is a monstrous thing. Opposition is only justifiable when the King himself stands at its head." "I, like my Imperial grand- father, represent the Monarchy by right divine. My door is ever open for every one of my subjects." The King proceeded to remind his nobles that he was the largest landlord in the Kingdom, and therefore shared their troubles; point out that

more than £5,000,000 had been spent on efforts to benefit East and West Prussia, and called upon the Prussian nobility to close round his House as the ivy closes round the oak,—rather an unlucky simile, as the ivy often chokes the tree. There was a battle to be fought against those who threaten the very foundations of the State and of society, "and I summon you to fight for religion, for morality, and for order against the parties of revolution." The nobles appear to have been deeply impressed by a speech so frank and so imperious, and are repudiating the idea of disloyal opposition, while the remainder of the community is evidently pleased that the noble class has "caught it." We shall, however, not know the result clearly till Parliament reassembles.