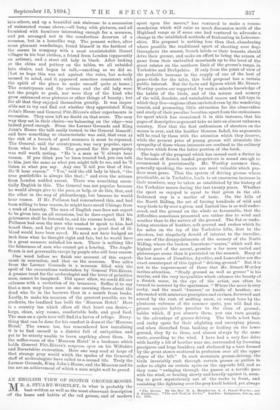 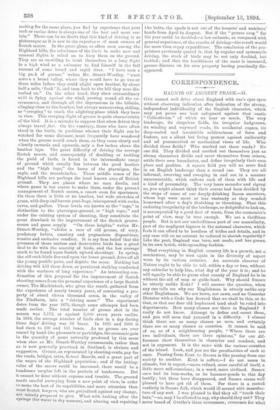 AN ENGLISH VIEW OF SCOTCH GROUSE-MOORS.

MR. A. STUART-WORTLEY, in what is probably the best-written as well as the most observant description of the home and habits of the red grouse, and of modern sport upon the moors,5 has ventured to make a recome mendation which will raise as much discussion north of the Highland range as if some one had ventured to advocate a change in the established methods of foxhunting in Leicester- shire. His proposal is nothing less than that, abandoning where possible the traditional sport of shooting over dogs throughout the season, Scotch lairds or their tenants should drive their grouse, and make an effort to bring the return of game from their unrivalled moorlands up to the level of the great estates on the southern limit of the grouse's range, in Yorkshire and Derbyshire. If only from the point of view of the probable increase in the supply of one of the best of game-birds for the table, this bold proposal has a certain public interest. But the facts and figures which Mr. Stuart- Wortley quotes are supported by such a minute knowledge of the habits of the birds, and of the nature and scenery of the wild, desolate, and uninhabited moors and hill-tops in which they live—regions often unvisited even by the wandering tourist, and presenting little attraction for the observation and study of their peculiar beauties, apart from the enthusiasm for sport which has occasioned it in this instance, that his pages of descriptive argument take us into an almost unknown country. Now that the first enthusiasm of shooters on the moors is over, and the heather blossom faded, his arguments will be read by them with the attention which they deserve, while the present price of young grouse will stimulate the sympathy of those whose interests are confined to the culinary chapters which form the latter portion of the book.