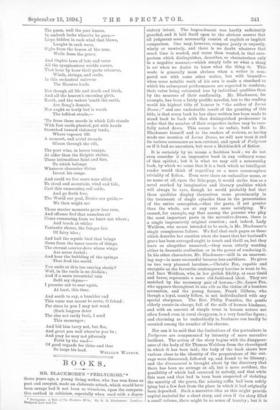 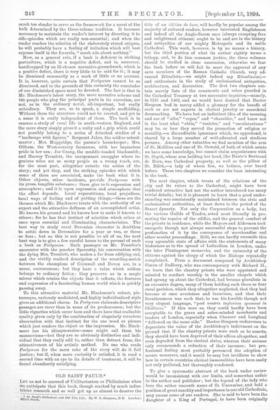 MR. BLACIVitfORE'S "PERLYCROSS."* SOME years ago, a young living writer, who has won fame as poet and essayist, made an elaborate attack, which would have been savage bad it not been so vivacious, upon the compara- tive method in criticism, especially when used with a depre- * Perlveroas: a Tale of the Westorn Hills. By It. D. Blackmore. London : Sampson Low and CO. oiatory intent. The impeachment was hardly sufficiently guarded, and it laid itself open to the obvious answer that all judgment must necessarily consist of explicit or implicit comparison. One may, however, compare justly or unjustly, wisely or unwisely, and there is no doubt whatever that much time is wasted, and worse than wasted, in that com- parison which distinguishes, describes, or charaoterises only in a negative manner,—which simply tells us what a thing is not when we desire to know what the thing is. This waste is generally most obvious when a writer is com- pared not with some other writer, but with himself— when some notable work of his own is made a standard to which his subsequent performances are expected to conform, their value being estimated less by individual qualities than by the measure of their conformity. Mr. Blackmore, for example, has been a fairly prolific novelist, but to the reading world his highest title of honour is "the author of Lorna Doom ;" and one undesirable result of the granting of this title, is that every book he has since written has been made to stand bank to back with that distinguished predecessor in order that the number of their respective inches may be care- fully noted down. This seems to us unfair, both to Mr. Blackmore himself and to the readers of reviews, so having made one mention of Lorna Doone, we will now treat it and its various successors as non. existent, and speak of Porlycross as if it had no ancestors, but were a Melchisedek of fiction..

It is certainly by no means a faultless book ; we do not even consider it an impressive book in any ordinary sense of that epithet ; but it is what we may call a noteworthy book, by which we mean that it is a book which no intelligent reader would think of regarding as a mere commonplace triviality of fiction. Even were there an unfamiliar name, or no name at all, upon the title-page, it would strike him as a novel marked by imaginative and literary qualities which will always be rare, though he would probably feel that these qualities display themselves more prominently in the treatment of single episodes than in the presentation of the entire conception,—that the parts, if not greater than the whole, are at any rate more satisfying. We cannot, for example, say that among the persons who play the most important parts in the narrative-drama, there is a single impressively original creation ; and, indeed, Lady Waldron, who seems intended to be such, is Mr. Blaokmore's single conspicuous failure. We feel that such pages as those which describe her emotion when she hears that her husband's grave has been outraged ought to touch and thrill us, but they leave us altogether unmoved,—they seem utterly wanting either in dramatic realisation or in the power of rendering it. In his other characters, Mr. Blackmore—still in an unarrest- ing way—is more successful because less ambitious. He gives us two very pleasant heroines,—Christie Fox, capable and energetic as the favourite contemporary heroine is wont to be, and Inez Waldron, who, in her girlish fidelity, at once timid and brave, represents a more old-fashioned ideal. They are matched by the necessary pair of heroes,—Dr. James Fox, who appears throughout in one rae as the victim of a baseless accusation, and the young farmer, Frank Gilbam, who though a loyal, manly fellow, is not individualised with any special sharpness. The Rev. Philip Penniloe, the gentle elderly curate-in-charge, full of the milk of human kindness, and with an amount of simple trust in human nature not often found even in rural clergymen, is a very familiar figure ; and charming as he undoubtedly is, freshness can hardly be counted among the number of his charms.

Nor can it be said that the limitations of the portraiture in Perlyerose are compensated by intensity of mere narrative incident. The action of the story begins with the disappear- ance of the body of Sir Thomas Waldron from the churchyard in which it has been laid ; the body of the book shows how various clues to the identity of the perpetrators of the out- rage were discovered, followed up, and found to be illusory; and the denouement is brought about by the discovery that there has been no outrage at all, but a mere accident, the possibility of which had occurred to nobody, and that while this man and that had in turn been suspected of violating the sanctity of the grave, the missing coffin had been safely lying but a few feet from the place in which it had originally been deposited. Such a narrative idea as this might provide capital material for a short story, and even if the story filled a small volume, there might be no sense of tenuity ; but it is much too slender to serve as the framework for a novel of the bulk determined by the three-volume tradition. It becomes necessary to maintain the reader's interest by diverting it to side-episodes which are really non-essential; and when the reader reaches the solution of the elaborately stated enigma, he will probably have a feeling of irritation which will best express itself in the formula, " much ado about nothing."

Now, as a general rule, if a book is deficient in striking portraiture, which is a negative defect, and is, moreover, handicapped by an ill-chosen narrative-groundwork, which is a positive defect, there is very little to be said for it ; it may be dismissed summarily as a work of little or no account. it is, however, quite certain that Perlyeross cannot be so dismissed, and to the grounds of this certainty the remainder of our diminished space must be devoted. The fact is that in Mr. Blackmore's latest story, the mere narrative scheme and We people who play the principal parts in its execution, are not, as in the ordinary novel, all-important, but really subsidiary. They are, so to speak, a simple scaffolding. Without them the structure could not be erected, and yet in a sense it is really independent of them. The book is in essence a study of rural life in south-western England, and the mere story simply gives it a unity and a grip which could not possibly belong to a series of detached studies of a "landscape with figures." Sergeant Jukes, the soldier school- master ; Mrs. Muggridge, the parson's housekeeper ; Mrs. Gilham, the West-country farmeress, with her loquacious pride in her son ; Joe Crang, the muddle-headed blacksmith ; and Harvey Tremlett, the unrepentant smuggler whose in- genious wiles set so many people on a wrong track, are, for the most part, altogether outside the action of the story; and yet they, and the striking episodes with which some of them are associated, make the book what it is. Other objects, other incidents, provide Perlyeroes with its gross, tangible substance ; these give to it expression and atmosphere ; and it is upon expression and atmosphere that the effect depends. Local superstitions, local prejudices, local ways of feeling and of putting things,—these are the themes which Mr. Blackmore treats with the authority of an expert and the attractive deftness of an accomplished artist. He knows his ground and he knows how to make it known to others ; for he has that instinct of selection which seizes at once upon essential and illuminating characteristics. The best way to study rural Devonian character is doubtless to settle down in Devonshire for a year or two, or three or four ; but as this is not possible to all of us, the next best way is to give a few careful hours to the perusal of such a book as Perla joross. Such passages as Mr. Penniloc's -encounter with the poacher Speccotty, his conversation with the dying Mrs. Tremlett, who makes a far from edifying end, and the vividly realised description of the wrestling-match between the champions of Cornwall and Devon are, in a sense, excrescences; but they have a value which seldom belongs to ordinary fiction : they preserve as in a magic mirror which retains the objects that it reflects, the features and expression of a fascinating human world which is quickly passing away.

To this attractive material Mr. Blackmore's robust, pic- turesque, variously modulated, and highly individualised style gives an additional charm. In Perlyeross elaborate descriptive passages are rarer than in some of its predecessors; but the little vignettes which occur here and there have that realisable quality given only by the combination of singularly veracious observation with that instinct for the one word or phrase which just renders the object or the impression. Mr. Black- more has his idiosyncrasies—some might call them his mannerisms—but they are so obviously distinctive and indi- vidual that they really add to, rather than detract from, the attractiveness of his artistic method. No one who reads Perlyeroes for the mere sake of the story will do it full justice ; but if, when mere curiosity is satisfied, it is read a second time with an eye to its details of treatment, it will be found abundantly satisfying.