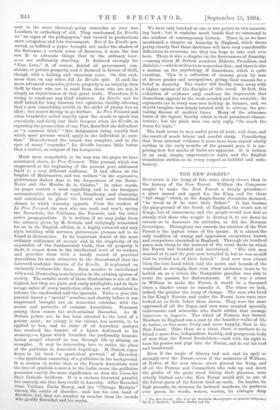 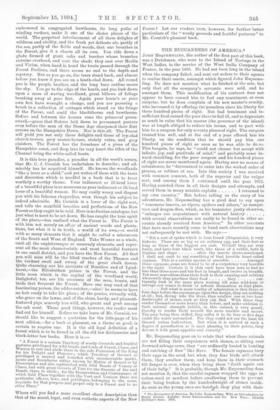 THE NEW FOREST.* NOWHERE is the irony of fate more

clearly shown than in the history of the New Forest. William the Conqueror sought to make the New Forest a kingly paradise,— a place sacred and apart for the King, and for those "tall stags " which, as the Anglo-Saxon chronicler declared, "he loved as if he were their father." It has become the play-ground of the South of England, the resort not of Kings, but of commoners, and the people would now deal as sternly with those who sought to destroy it, to cut down its coverts or to desecrate its solitudes, as did the Norman Sovereigns. Throughout our records the creation of the New Forest is the typical crime of the tyrant. It is almost the only tradition of wrong and oppression everywhere known and everywhere cherished in England. Through six hundred years men clung to the memory of the cruel deeds on which the Forest was founded and maintained. " His rich men moaned at it, and the poor men bewailed it, but he was so stiff that he reeked not of their hatred." And now men almost bless the iron hand which laid the metes and bounds of the woodland so strongly, that even when enclosure came to be looked on as a virtue, the Hampshire paradise was able to resist the passion for disforestment. If it was a crime in William to make the Forest, it would be a thousand times a blacker crime to unmake it. The closer we look, indeed, the greater the irony of change. The men who lived in the King's Forests and under the Forest laws were once looked on as little better than slaves. They were the most oppressed of all the lieges, and men were counted specially unfortunate and miserable who dwelt within that strange imperium in imperio. The wheel of Fortune has turned. Nowhere in England can a man in the humbler walks of life do better, or live more freely and more happily, than in the New Forest. Take them as a class, there is nowhere to be found a more free, independent, healthy, and prosperous body of men than the Forest freeholders,—each with his right to turn his ponies and pigs into the Forest, and to cut his turf and brushwood.

Even if the magic of history had not cast its spell so strongly over the Forest—even if the memories of William, of Rufus, of the man whose arrow pierced the King, and of all the Princes and Counsellors who rode up and down the glades of the great wood taking their pleasure, were utterly blotted out,—the New Forest would still be one of the fairest parts of the fairest land on earth. Its heaths, its high grounds, its streams, its inclosed meadows, its pastures ever green, its woods, waters, wastes, its cottages deep The New Forest. (No. 8 of the Portfolio Monographs on Artistic Subjects.) By 0. J. Cornish. London ; Seeley and Co. embowered in congregated hawthorns, its long paths of winding verdure, make it one of the choice places of the world. The perpetual interlacement of all these delights of wildness and civility, and the fresh yet delicate air, partly of the sea, partly of the fields and woods, that one breathes in the Forest, give it a champ all its own. You ride down a glade formed of giant oaks and beeches whose branches entwine overhead, and cast the shade they cast over Merlin and Vivien, when hand in hand the twain passed through the Forest Perilous, and there seems no end to the depth and mystery. Bat as you go on, the trees stand back, and almost before you know it you are on a heath-clad down. All round you is the purple heather, and the long bare outline meets the sky. You go to the edge of the heath, and you look down upon a mass of waving woodland, great billows of foliage breaking away at your feet. Again your horse's or your own feet have wrought a change, and you are pursuing a brook to a collection of cottages which stand on the fringe of the Forest, and amid the blackthorns and hawthorns. Before and between the houses runs the primaeval green- award,—grass that Nature laid down to permanent pasture even before the men of the Stone Age sharpened their flint arrows on the Hampshire Down. Nor is this all, The Forest will yield you not only these delights and those of ivy-clad church-towers, grey manor-houses, stately ruins, and grey cloisters. The Forest has the foreshore of a piece of the Hampshire coast, and deep into its very heart the tides of the Channel bring the white-sailed boats.

It is this true paradise, a paradise in all the word's senses, that Mr. C. J. Cornish has undertaken to describe ; and ad- mirably has he acquitted himself. He knows the woodlands "like a lover or a child," and yet writes of them with the taste and discretion which is needful in a book that is to treat worthily a worthy theme. Your indiscreet or ill-bred lover of a beautiful place is as nauseous as your indiscreet or ill-bred lover of a beautiful woman. He may easily weary and disgust you with his fulsome rhapsodies, even though his subject be indeed admirable. Mr. Cornish is a lover of the right sort, and tells the manifold beauties and perfections of the New Forest as they ought to be told. Here is no fustian catalogue, but just what is meet to be set down. He has caught the true spirit of the place,—has realised what the Forest is. The Forest is with him not merely an affair of ancient woods and planta- tions, but what it is in truth, a world of its own,—a world with so many elements that it might be called a microcosm of the South and West of England. Take Wessex as a whole, omit all the unpicturesque or unseemly elements, and repre- sent all the most characteristic and most beautiful features in one small district, and you have the New Forest. All that you will miss will be the lilied reaches of the Thames and the verdant swell and sweep of the great chalk downs. Quite charming are his accounts of Beaulieu and of Lynd- hurst,—the Elizabethan palace in the Forest, and the little town which is the capital of the woodland world. Delightful, too, are his accounts of the men, beasts, and birds that frequent the Forest. Here one may read of that fascinating person, the adder-catcher,—alas ! he seems to have no heir ready to take his place ; of the ponies, virtually wild, who graze on the lawns, and of the clean, hardy, and pleasant- featured pigs, scarcely less wild, who grunt and grub among the oak mast. These good things, however, the reader must find out for himself. Before we take leave of Mr. Cornish, we should like to suggest a quotation for the title-page of his next edition,—for a book so pleasant, on a theme so good, is certain to require one. It is the old legal definition of a forest which is to be found in all the old law dictionaries and black-letter law books. Here it is :— " A Forest is a certain Territory of woody Grounds and fruitful pastures privileged for wild beasts and fowls of Forest, Chase, and Warren to rest and abide there in the safe Protection of the King for his Delight and Pleasure ; which Territory of Ground so privileged is zneeted and bounded with unremoveable marks, meets and Boundaries either known by Matter of Record or by Prescription and also replenished with wild Beasts of Venery or Chace, and with great Coverts of Vert for the Succour of the said Beasts there to abide ; for the Preservation and Continuance of which Said Place together with the Vert and Venison there are particular officers, laws, and privileges, belonging to the same,

requisite for that purpose and proper only tc a Forest and to no other Place."

Where will you find a more excellent short description than that of the moral, legal, and even aesthetic aspects of the New Forest P Let our readers turn, however, for further better particulars of the " woody grounds and fruitful pastures" to Mr. Cornish's pleasant book.