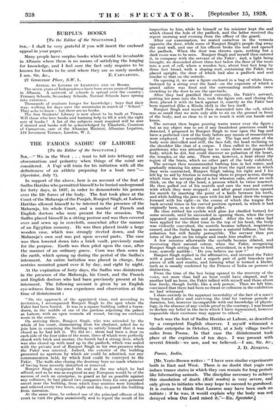 THE FAMOUS SADHU OF LAHORE [To the Editor of the

SPECTATOR.] SIR,--" We in the West . . . tend to fall into lethargy and obscurantism and pedantry when things of the mind are considered. A Yogi will train for his initiation with all the definiteness of an athlete preparing for a boat race "— (Spectator, July 7).

In support of the above, here is an account of the feat of Sadhu Haridas who permitted himself to be buried underground for forty days, in 1837, in order to demonstrate his powers over the life forces of the body. The feat took place at the Court of the Maharaja of the Punjab, Runjeet Singh, at Lahore. IIaridas allowed himself to be interred in the presence of the Maharaja, his whole Court, and a number of French and English doctors who were present for the occasion. The Sadhu placed himself in a sitting posture and was then covered over and sewn up in cerecloth, somewhat after the manner of an Egyptian mummy. He was then placed inside a large wooden case, which was strongly riveted down, and the Maharaja's own seal was put upon several parts. The case was then lowered down into a brick vault, previously made for the purpose. Earth was then piled upon the case, after the manner of an ordinary grave. Corn was then sown in the earth, which sprang up during the period of the Sadhu's interment. An entire battalion was placed in charge, four sentries mounted guard over it by day, and eight by night.

At the expiration of forty days, the Sadhu was disinterred in the presence of the Maharaja, his Court, and the French and English doctors who had been previously present at his interment. The following account is given by an English eye-witness from his own experience and observation at the time of disinterment :

" On the approach of the appointed time, and according to invitation, I accompanied Runjeet Singh to the spot where the Fakir had been buried. It was in a square building called a burrs- duns, in the middle of one of the gardens adjoining the palace at Lahore, with an open veranda all round, having an enclosed room in the centre.

On arriving there, Runjeet Singh, who was attended by the whole of his court, dismounting from his elephant, asked me to join him in examining the building to satisfy himself that it was closed as he had left it. We did so ; there had been a door on each side of the four sides of the room, three of which were. perfectly closed with brick and mortar, the fourth had a strong door, which was also closed up with mud up to the padlock, which was sealed with the private seal of Runjeet Singh in his awn presence when the Fakir was interred. Indeed, the exterior of the building presented no aperture by which air could be admitted, nor any communication held, by which food could be conveyed to the Fakir. The walls also closing the doorway bore no mark whatever of having been recently disturbed or removed. Runjeet Singh recognized the seal as the one which he had affixed, and as he was as sceptical as any European would be of the success of such an enterprise, to guard as far as possible against any collusion, he had placed two companies from his own personal escort near the building, from which four sentries were furnished and relieved every two hours, night and day, to guard the building from intrusion.

At the same time, he ordered one of the principal officers of his court to visit the place occasionally and to report the result of his inspection to him, while he himself or his minister kept the seal which closed the hole of the padlock, and the latter received the report morning and evening from the officer of the guard.

After our examination, we seated ourselves in the veranda opposite the door, while some of Runjeet Singh's people dug away the mud wall, and one of his officers broke the seal and opened the padlock. When the door was thrown open, nothing but a dark room was to be seen. Runjeet Singh and myself then entered it, in company with the servant of the Fakir ; and, a light being brought, we descended about three feet below the floor of the room into a sort of cell, where a wooden box, about four feet long by three feet broad, with a sloping roof, containing the Fakir, was placed upright, the door of which had also a padlock and seal similar to that on the outside.

On opening it, we saw a figure enclosed in a bag of white linen, fastened by a string over the head—on the exposure of which a grand salute was fired and the surrounding multitude came crowding to the door to see the spectacle. . After they had gratified their curiosity, the Fakir's servant, putting his arms into the box, took the figure out, and closing the door, placed it with its back against it, exactly as the Fakir had been squatted (like a Hindu idol) in the box itself. Runjeet Singh and myself then descended into the cell, which was so small that we were only able to sit on the ground in front of the body, and so close to it as to touch it with our hands and knees.

The servant then began pouring warm water over the figure • but as my object was to see if any fraudulent practices could be detected, I proposed to Runjeet Singh to tear open the bag and have a perfected view of the body before any means of resuscitation were employed. I accordingly did so. The legs and arms of the body were shrivelled and stiff, the face full, the head reclining on the shoulder like that of a corpse. I then called to the medical gentleman who was attending me to come down and inspect the body, -which he did, but could discover no pulsation of the heart, the temples, or the arm. There wae, however, a heat about the region of the brain, which no other part of the body exhibited.

The servant then recommended bathing him in hot water, and gradually relaxing his arms and legs from the rigid state in which they were contracted, Runjeet Singh taking his right and I his left leg to aid by friction in restoring them to proper action, during which time the servant placed a hot wheaten cake, about an inch thick, "on the top of the head, a process which he twice renewed. He then pulled out of 'his nostrils and ears the wax and cotton with which they were stopped : and after great exertion opened his mouth by inserting the point of a knife between his teeth, and while holding the jaws open with his left hand drew the tongue forward with his right—in the course of which the tongue flew back several times in his curved position upward, in which it had originally been, so as to close the gullet. • He then rubbed his eyelids with ghee (or clarified butter) for some seconds, until he succeeded in opening them, when the eyes appeared quite motionless and glazed. After the hot cakes had been applied for the third time to the top of his head, the body was violently convulsed, the nostrils became inflated, respiration ensued, and the limbs began to assume a natural fullness; but the pulsation but still faintly perceptible. The servant then put some of the ghee on his tongue and made him swallow it. A few minutes afterwards the eyeballs became dilated, and recovering their natural colour, when the Fakir, recognizing Runjeet Singh sitting close to him, articulated, in a low sepulchral tone, scarcely audible : ' Do you believe me now ? '

Ranjeet Singh replied in the affirmative, and invested the Fakir with a pearl necklace, and a superb pair of gold bracelets and pieces of silk and muslin, and forming what is termed a khelat, such as is usually conferred by the Princes of India on persons of distinction.

From the time of the box being opened to the recovery of the voice, not more than half an hour could have elapsed, and in another half an hour, the Fakir talked with myself and those about him freely, though feebly, like a sick person. Then we left him; convinced that there had been no fraud or collusion in the exhibition we had witnessed.

I share entirely in the apparent incredulity of the fact of a man's being buried alive and surviving the trial for various periods of duration, but, however incompatible with our knowledge of physio- logy, in the absence of any visible proof to the contrary, I was bound to declare my belief in the facts which I have represented, however impossible their existence may appear to others. ' •

Such was the feat of Sadhu Haridas at Lahore, as described by a competent English observer. I myself witnessed a similar enterprise in October, 1912, at a holy village twelve miles from Poona. In that case the - disintermeht took place at the. expiration of ten days. I was present with several friends—we saw, and we believed.—I am, Sir, &c., J. D. JENKINS. Poona, India.

[Mr. Yeats-Brown writes : " I have seen similar experiments both in East and West. There is no doubt that yogis can induce trance states hi which they can remain for long periods like hibernating animals. The discipline necessary to achieve. this simulation of death (Kali nutdra) is very severe, an only given to initiates who may hope to succeed to guruhood. It is curious to think that Lazarus may have been such an initiate : if he was, it would explain why the body was not decayed when Our Lord raised it."—En. Spectator.]