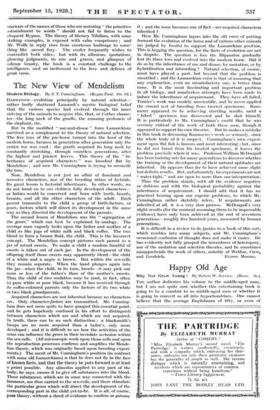 The New View of Mendelism

Daawnossr—evolution principally by natural selection— rather badly shattered Lamarck's mystic biological belief that the various species had evolved through the inner striving of the animals to acquire this, that, or t'other charac- ter-the long neck of the giraffe, the amazing proboscis of the elephant, etc.

But in the modified " use-and-disuse " form Lamarckism survived as a complement to the theory of natural selection.

The five toes of the pre-horse turned into the hoof of the modern horse, because in generation after generation only the centre toe was used : the giraffe acquired its long neck by constantly stretching, through countless generations, after the highest and juiciest leaves. This theory of the " in- heritance of acquired characters " was knocked flat by Mendelism ; and now Mr. Cunningham is trying to reconcile the two. -

Now, Mendelism is not just an affair of dominant and recessive characters, nor of the breeding ratios- of hybrids.

Its great lesson is factorial inheritance. In other words, we do not hand on to our children fully developed characters— or babies would be conceived and born with teeth, beards,

breasts, and all the other characters of the adult. Each parent transmits to the child a group of birth-factors, or genes, factors which will direct its development in the same way as they directed the development of the parents.

' The second lesson of Mendelism was the " segregation of the genes," which can best be explained by analogy. The

average man vaguely looks upon the father and mother of a child as like jugs of white milk and black coffee. The two blend to form a brown fluid, the child. This is the incorrect concept. The Mendelian concept pictures each parent as a jar of mixed sweets. To make a child a random handful of sweets is taken out of each jar. In the development of the offspring itself those sweets may apparently blend—the child of a white and a negro is brown. But within the sex-cells they remain separate. When the hand plunges again into the jar—when the child, in its turn, breeds—it may pick out more or less of the father's than of the mother's sweets. Thus the child of two mulattos may be (and, in fact, often is) pure white or pure black, because it has received through its coffee-coloured parents only the factors of its two white or two black grandparents.

Acquired characters are not inherited because no characters are. Only character-factors are transmitted. Mr. Cunning- ham does not seem quite to have grasped this essential point, and he gets hopelessly confused in his effort to distinguish between characters which are and which are not acquired.

In truth, there can be no such distinction ; a blacksmith's

biceps are no more acquired than a tailor's, only more developed ; and it is difficult to see how the activities of the

arms can influence the genes in their inviolate seclusion within

the sex-cells. (All microscopic work upon those cells and upon the reproduction processes confirms and amplifies the Mende- lian theory, which was originally based upon breeding experi-

ments.) The merit of Mr. Cunningham's position (in contrast with some old Lamarckians) is that he does not fly in the face of known facts, and that the theory he puts forward is at least a priori possible. Any stimulus applied to any part of the body, he says, causes it to give off substances into the blood.

These substances, which are in some way connected with the hormones, are thus carried to the sex-cells, and there stimulate the particular genes which will direct the development of the corresponding part in the child yet-to-be. It is all, of course, pure theory, without a shred of evidence to confirm or gainsay

it ; and the issue becomes one of fact—are acquired characters inherited ?

Here Mr. Cunningham lapses into the old error of putting forward the evolution of the horse and of various other animals (as judged by fossils) to support the Lamarekian position. This is begging the question, for the facts of evolution are not in dispute. The question is how the Hipparion gradually lost its three toes and evolved into the modern horse. Did it do so by the inheritance of use and disuse, by mutation, or by hybridization and inbreeding ? Natural selection, of course, must have played a part, but beyond that the problem is unsettled ; and the Lamarekian error is that of assuming that any explanation, even an unsatisfactory one, is better than none. It is the most fascinating and important problem in all biology, and numberless attempts have been made to induce the inheritance of acquirement. They have all failed. Tornier's work was crudely unscientific, and he never applied the crucial test of breeding from treated specimens. Kant- merer appeared to be achieving startling results, until a " faked " specimen was discovered and he shot himself. It is particularly to Mr. Cunningham's credit that he was severely critical of the work of both these men, though it appeared to support his own theories. But he makes a mistake in this book in discussing Kammerer's work so seriously, since the whole body of it is suspect. Cunningham's own experi- ment upon flat fish is famous and most interesting ; but, since he did not breed from his treated specimens, it leaves the problem precisely where it was Professor William McDougall has been training rats for many generations to discover whether the training or the development of their natural aptitudes are inherited. He appears thus far to have achieved some slight but definite results. But, unfortunately, his experiments are not " water-tight," and are open to more than one interpretation.

Thus the problem stands, with all the evidence negative or dubious and with the biological probability against the inheritance of acquirement. I should add that it has no practical bearing upon our eugenic problems, to which Mr. Cunningham rather sketchily refers. If acquirements are inherited at all, it is a very slow process. McDougall's very slight results (for the moment assuming them to be impeccable evidence) have only been achieved at the end of seventeen generations—roughly five hundred years, measured by human generations.

It is difficult in a review to do justice to a book of this sort, which rambles into many subjects, and Mr. Cunningham's occasional confusion of thought does not make it easier. He has evidently not fully grasped the inwardness of heterogony, nor of the mutation and selection theories, and he sometimes misapprehends the work of others, notably of Weldon, Crew,