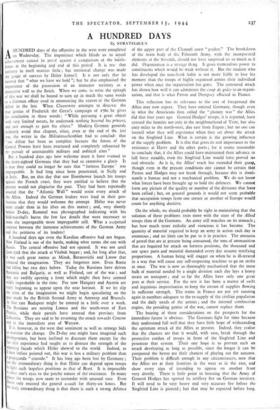 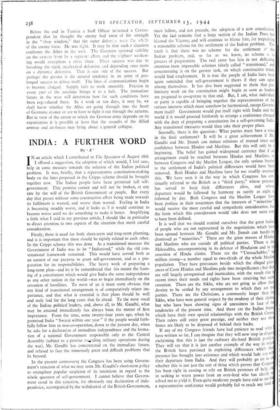 HUNDRED days of the offensive in the west were completed

A on Wednesday. The impatience which blinds us to actual achievement cannot be prof against a comparison of the battle- fronts at the beginning and end of this period It is trw: that territory in itself matters little ; but territorial change was made the gauge of success by Hitler himself. It is not only that he insisted that " what we have we hold "; but he also emphasised the importance of the possession of an immense territory as a protective wall to the Reich. When we come to write the epitaph or this war we shall be bound to sum up in much the same words as a German officer used in announcing the reason of the German defeat in the last. When Clausewitz attempts to discover the true genius of Frederick the Great's campaign of 176o he gives his conclusion in these words: " While pursuing a great object with very limited means, he undertook nothing beyond his powers, and /us/ enough to gain his object." Modern; German generals evidently avoid that chapter, since, even at the end of the- last star, the writer in the Militarwochenblatt had to conclude that our defeat has been so complete because the forces of the Central Powers have been overtaxed and completely exhausted by thr pursuit of unattainable military and political aims " But a hundred days ago how welcome must it have seemed to the short-sighted Germans that they had so extensive a glacis It i, true they could no longer be sure that " fortress Europe' was Impregnable. It had long since been penetrated, in Sicily and in Italy. But, on this day that saw Eisenhower launch his troops against the French coast, they were entitled to believe that the present would not plagiarise the past. They had been repeatedly assured that the " Atlantic Wall " would resist every attack of the Allies. Indeed the German leaders were loud in their pro- fessions that they would welcome the attempt. Hitler was never more crude than in his jibes on this matter ; and, very shortly before D-day,. Rommel was photographed indicating with his field-marshal's baton the few last details that were necessary to make the impregnable more impregnable still. What a perpetual contrast between the immense achievements of the German Army and the pettiness of its leaders!

A hundred days ago even the Karelian offensive had not begun. Now Finland is out of the battle, making what terms she can with Russia. The central offensive had not opened. It was not until June z3rd that the attack at Vitebsk began ; and, for long after that, it was such great names as Minsk, Baranovichi and Lwow that coloured the imagination. They are forgotten now. Even Rome had fallen but two days before. Today the Russians have driven Rumania and Bulgaria, as well as Finland, out of the war ; and they are swiftly opening a front which might then have seemed wildly improbable in the time. For now Hungary and Austria are really beginning to appear upon the near horizon. If we let slip the reins of the imagination we might begin speculating on the pace made by the British Second Army to Antwerp and Brussels. At that rate Budapest might be entered in a little over "a week. The Russians are nearing Lomza and the south-west of East Prussia, while their patrols have entered that province from Lithuania. They are said to be resuming the attack towards Cracow and in the immediate area of Warsaw.

It is, however, in the west that sentiment as well as strategy bids us examine the change. On D-day one might have imagined such developments, but been inclined to discount them except for the fact that experience had taught us to distrust the strength of the imposing facade which Hitler showed to the world. Indeed, as I have before pointed out, this war is less a military problem than

a Propaganda " crusade." It has long ago been lost by Germany ; yet the extraordinary thing is that Hitler can depend upon troops to fight such hopeless positions as.that of Brest. It is impossible to close one's eyes to the patchy nature of the resistance. In many places the troops now seem to surrender with unusual ease. Even Havre only resisted the general assault for thirty-six hours. But the truly extraordinary thing is that there is such a strong defence

of the upper part of the Channel coast " pocket." The breakdown of the main body of the Fifteenth Army, with the incorporated elements of the Seventh, should not have surprised us so much as it did. Organisation is a strange thing. It gives tremendous power to constituents which would be weak without it. But the student who has developed the note-bcok habit is not more liable to lose his memory than the troops of highly organised armies their individual power when once the organisation has gone. The armoured attack has shown how well it can administer the coup de grace to an organi- sation, and that is what Patton and Dempsey effected in France.

This reflection has its relevance to the sort of foreground the Allies may now expect. They have entered Germany, though even in what the Americans then called the " phoney war " the Allies did that four years ago. General Hodges' troops, it is reported, have crossed the frontier not only in the neighbourhood of Trier, but also sixty miles to the north-west, due east from Eupen ; but no one can foretell what they will experience when they set about the attack on the Siegfried Line. What is certain is the growing influence of the supply problem. It is this that gives its real importance to the resistance at Havre and the other ports ; for it seems reasonable to conclude that, if the Allies could have maintained their advance in full force steadily, even the Siegfried Line would have proved no real obstacle. As it is, the Allies' reach has exceeded their grasp, though even in the present conditions one cannot be certain that Patton and Hodges may not break through, because this is domi- nantly a human and not a mechanical problem. We do not know what forces have been brought up to hold the defences. We cannot form any picture of the quality or number of the divisions that have been rallied ; but, on general grounds it would not seem probable that occupation troops from one corner or another of Europe would count for anything decisive.

On the whole, we should probably be right in maintaining that the solution of these problems rests more with the state of the Allied troops than of the Germans. An army still marches on its stomach ; but how much more catholic and voracious it has become. The quantity of material required to keep an army in action each day is enormous ; and no limit can be put to it in practice. The amounts of petrol that are at present being consumed, the tons of ammunition that are required for attack on fortress positions, the thousand and one spare parts and material demanded every day assume terrifying proportions. A human being will stagger on when he is ill-treated in a way that will cause any self-respecting machine to go on strike at once. The war is now so thoroughly mechanised that the mere bulk of material needed by a single division each day lays a heavy strain on transport ; and so far the Allies have only one great port at their -service. For the rest it has been a matter of swift and ingenious improvisation to keep the stream of supplies flowing in sufficient -strength. The trains in France are not yet running again in numbers adequate to the re-supply of the civilian population and the daily needs of the armies ; and the internal combustion engine, the presiding genius of the war, cannot replace them.

The bearing of these considerations on the prospects for the immediate future is obvious. The Germans fight for time because they understand full well that they have little hope of withstanding the optimum attack of the Allies at present. Indeed, they realise that the chances are that it would, with ease, break through the protective cordon of troops in front of the Siegfried Line and penetrate that system. Their one hope is to prevent such an attack developing as long as possible, since the longer it can be postponed the better arc their chances of playing out the autumn. Their problem is difficult enough in any circumstances, now that the Allies are at their frontiers in the west as in the east, and show every sign of intending to appear on another front very shortly. There is little point in boasting that the Army of General Hodges has opened its artillery fire on German territory. It will need to be very heavy and very accurate fire before the Siegfried Line is pierced ; but that may be expected before long.

Before the end in Tunisia a Staff Officer in'ormed a Corres- pondent that he thought the enemy had most of his strength in the "shop window," that the outer defenczs were the whzle of the enemy force. He was right. It may be that such a situation confronts the Allies in the west. The Germans restored stability on the eastern front by a supreme effort, and the s'ightes- weaken- ing would precipitate a crisis there. Their success was due to forsaking the rigid, mechanical defensive and depending once more on a dynamic defensive. That is one side of the success. But perhaps the greater is the natural tendency in an army of pro- longed success to defeat itself. The lines of communications begin to become clogged. Supply fails to work smoothly. Friction in every part of the machine brings it to a halt. The immediate future in the west will determine how far such conditions have been reproduced there. In a week or ten days, it may be, we shall know whether the Allies are going through into the heart of Germany at once or are to have to fight it out through the autumn. But in view of the extent to which the German army depends on its organisation it is possible at least that the assaults of the Allied armour and air-forces may bring about a general collapse.