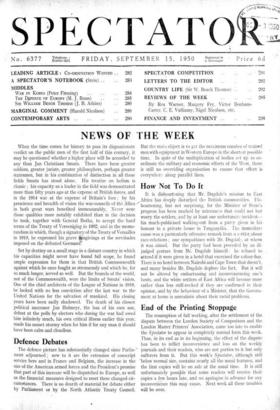 The defence picture has substantially changed since Parlia- ment adjourned ; new to it are the extension of conscript service here and in France and Belgium, the increase in the size of the American armed forces and the President's promise that part of this increase will be dispatched to Europe, as well as the financial measures designed to meet these changed. cir- cumstances. There is no dearth of material,for debate .either by Parliament or by the North Atlantic Treaty Council. But the main object is to get the maximum number of trained men with equipment in Western Europe in the shortest possible time. In spite of the multiplication of bodies set up to co- ordinate the military and economic efforts of the West, there is still no overriding organisation to ensure that effort is everywhere along parallel lines.