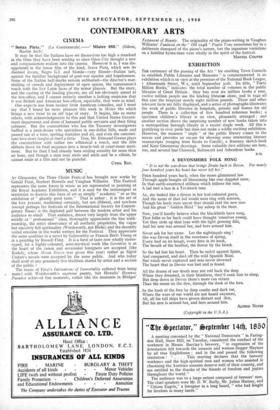 THE centenary of the passing of the Act "for enabling Town Councils to establish Public Libraries and Museums" is commemorated in an exhibition which is on view at the premises of the National Book League, 7 Albermarle Street, W.', until September 3oth. Its title, "Forty Million Books," indicates the total number of volumes in the public libraries of Great Britain ; they buy over six million books a year, twelve million people use the lending libraries alone, and in 5949 all this cost the taxpayer nearly eight million pounds. These and other relevant facts are fully displayed, and a series of photographs illustrates the work of public libraries in hospitals, prisons and homes for old people. There is a - collection of five hundred reference books ; a specimen children's library is on view, pleasantly arranged ; and another section shows the surprising number of new books taken into a metropolitan borough library in a recent single week. All this is gratifying to civic pride but does not make a wildly exciting exhibition. However, the museum " angle " of the public library comes to the ,rescue and provides an excuse for showing some interesting literary manuscripts (ranging from keatrs to Corelli), a Romney sketch-book and Kate Greenaway drawings. Some Valuable first editions are here, too, and several fine Chiswick, Kelmscott and Ashentlene books. -