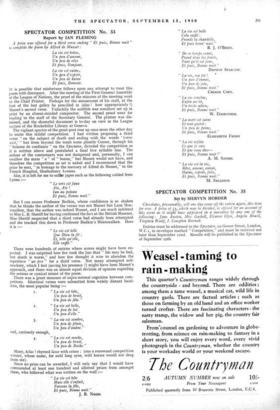 A prize was offered for a third verse ending "El puis, Bonne nuit" to complete the poem by Alfred de Musset :

IT is possible that misfortune follows upon any attempt to treat this poem with disrespect. After the meeting of the First General Assembly of the League of Nations, the proof of the minutes of the meeting went to the Chief Printer. Perhaps for the amusement of his staff, at the foot of the last galley he pencilled in (alas I how appropriately ) Musset's second verse. Unluckily the scribble was somehow set up in print by an absent-minded compositor. The second proof went for reading to the staff of the Secretary General. The printer was dis- missed, and the shameful document is to-day on view in the League section of the Rockefeller Library at Geneva.

The vigilant spectre of the great poet rose up once more the other day to smite this infidel competition. I had written proposing a third verse "on the subject of death and ending with the words bonne nuit,'" but from beyond the tomb some ghostly Censor, through his " homme de confiance " on the Spectator, dictated the competition as it is written above and postulated a final five syllable line. The ardour of the contestants was not dampened and, personally, I can swallow the mute " e " of "bonne," but Musset would not have, and therefore the competition as set is unfair and I recommend that the prize be sent, "in homage to the memory of Alfred de Musset," to the French Hospital, Shaftesbury Avenue.

Alas, it is left for me to suffer japes such as the following cabled from Lyons :— " Le vers est faux Aie, Ale 1 Ian au poteau Et puis, Bonne nuit."

But I can assure Professor Bodkin, whose confidence is so shaken that he thinks the author of the verses was not Musset but Leon Mon- tenalken, that the author was indeed Musset, and I am much indebted to Miss L. B. Sheriff for having confirmed the fact at the British Museum. Miss Sheriff suspected that a third verse had already been attempted and she tracked this down to Professor Bodkin's Montenalken. Here it is :— " Le vie est tells Que Dieu la fit ; Et, tells qu'elle, Elle suffit."

There were hundreds of entries where scores might have been ex- pected. I was surprised how few took the line that "life may be bad, but death is worse," and how few thought it wise to abandon the repetitive " un peu" for a third verse. Not many attempted self- mockery, which I feel (saving his presence ?) might have been Musset's approach, and there was an almost equal division of opinion regarding the serious or cynical intent of the poem.

There was a great measure of supra-normal cognition between com- petitors. -Identical verses were submitted from widely distant local- ities, the most popular being :- i.

Many, helas ! rhymed lasse with extase ; (one a renowned competition winner, whose name, for auld lang sync, wild horses would not drag from me).

Since no prize can be awarded, I will only say that I would have commended at least one hundred and allotted prizes from amongst these, who followed what was written on the wall :—