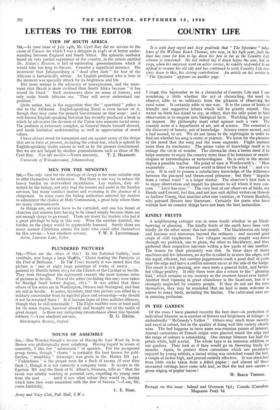 Sm,—In your issue of July x4th, Mr. Cyril Ray did no service to the cause of Unesco (to which I.was a delegate in 1946) or of better under- standing' between England and South Africa. His splenetic outburst based on very partial experience of the country, in the article entitled Dr. Malan's Mission, is full of misleading generalisations which it would take 'too long to discuss. Consider a superficial instance. His statement that Johannesburg is " dead after dark" for fear of the Africans is fantastically untrue. An English professor who is here at the moment was specially struck by its brightness and life.

But more serious is the advocacy of miscegination, and the state- ment that Brazil is more civilised than South Africa because "it has mixed its blood." Such statements show no sense of history, and only make South Africans say, "They will never understand our problem."

Quite unfair, too, is the suggestion that the " apartheid " policy is due to the Afrikaner. English-speaking Natal is even keener on it, though they may curse the present Government on that score ; and a well-known English-speaking historian has recently produced a book in which he advocates the division of the Union into separate racial areas. The problem is extremely complex, as General Smuts himself showed, and needs historical understanding as well as appreciation of moral values.

I have always stood for humanism and am against many of the things that are in force at present, including the colour-bar, which is upheld by English-speaking trades unions as well as by the present Government. But we are not helped by shallow generalisations such as those of Mr.