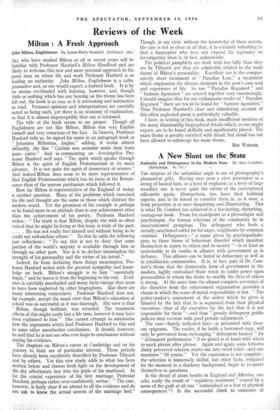 ALL who have studied Milton at all in recent years will be familiar with Professor Hanford's Milton Handbook and are likely to welcome this new and more personal approach to the great man on whose life and work Professor Hanford is so leading an authority. John Milton, Englishman is a calm, persuasive and, as one would expect, a learned book. It is by no means overloaded with learning, however, and, though little or nothing which has any bearing on the theme has been left out, the book is as easy as it is interesting and instructive to read. Personal opinions and interpretations are carefully noted as being such, yet there is an economy' of explanation, so that it is almost imperceptibly that one is informed.

The title of the book seems to me proper. Though all Englishmen are not like Milton, Milton was very English himself and very conscious of the fact. In Geneva, Professor Hanford tells us, he signed his name in an autograph book as "Johannes Miltonius, Anglus," adding, it seems almost defiantly, the line " Coelum non animum muto dum trans mare. curro." And in commenting on Areopagitica Pro- fessor Hanford well says "The spirit which speaks through Milton is the spirit of English Protestantism in its main advance. It is not quite the spirit of democracy or science." And indeed Milton does seem to be more representative of that English Protestantism which has its roots in the Renais- sance than of the narrow puritanism which followed it. illow far Milton is representative of the England of today is another question. Many of the problems which exercised his life and thought are the same as those which distract the modern world. Yet the greatness of his example is perhaps to be found more in an attitude than in any achievement other than the achievement of his poetry. Professor Hanford writes : "The truth is that Milton, despite the wish so often voiced that he might be_living at this hour, is truly of the past. . . . . He was not really free himself and without being so he could not enfranchise others." To this he adds the following just reflections : " To say this is not to deny that some portion of the world's majesty is available through him as through no other poet. Nor is it to declare meaningless the strength of his personality and the virtue of his intent."

Indeed, far from declaring these things meaningless, Pro- fessor Hanford writes with the greatest sympathy and know- ledge on both. Milton's struggle is to him "essentially ttagic," and he traces it from the beginning to the end. Evid- ence is carefully marshalled and many facts emerge that seem to have been neglected by other biographers. Also there are many interesting conjectures. Professor Hanford does not, for example, accept the usual view that Milton's education at school was as successful as it was thorough. His view is that "Milton, though brilliant, was retarded. The traumatic effects of this might easily last a life time, however it may have been explained to him.' One cannot attempt to summarise here the arguments which lead Professor Hanford to this and to some other unorthodox conclusions. It should, however, be said that he is not one who ever leaps to conclusions without stating his evidence.

The chapters on Milton's career at Cambridge and on his Journey to Italy are of particular interest. These periods have already been excellently described by Professor Tillyard and by others. Yet this new study adds to what has been written before and throws fresh light on the development of the shy affectionate boy into the pride of his manhood. As for the crucial experience of his first marriage, Professor Hanford, perhaps rather over-confidently, writes : "The case, however, is fairly clear if we attend to all the evidence and do not ask to know the actual .secrets of the marriage bed." Though, in my view, without the knowledge of these secrets, the case is not so clear as all that, it is certainly refreshing to find a biographer who does not expend his ingenuity on investigating what is, in fact, unknowable.

The political pamphlets are dealt with less fully than they are by Tillyard, yet they are admirably related to the main theme of Milton's personality. Excellent too is the compar- atively short treatment of " Paradise Lost," a treatment which emphasises the diverse elements in the poet's pwn soul and experience of life. So too "Paradise Regained" and "Samson Agonistes " are related together very convincingly. I should imagine that for one enthusiastic reader of" Paradise Regained" there are ten to be found for" Samson Agonistes." Thus Professor Hanford's clear and stimulating account of this often neglected poem is particularly valuable.

I have, in writing of this book, made insufficient mention of the many illuminating biographical details which, as one might expect, are to be found skilfully and significantly placed. The main theme is greatly enriched with detail, but detail has not been allowed to submerge the main theme.