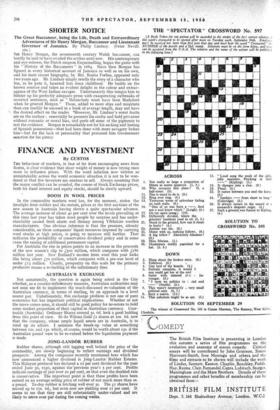 The Great Buccaneer, being the Life, Death and Extraordinary Adventures of Sir Henry Morgan, Buccaneer and Lieutenant Governor of Jamaica. By Philip Lindsay. (Peter Nevi11. 6s.) SIR Henry Morgan, the seventeenth century Welsh buccaneer, can hardly be said to have evaded the scribes until now. His contemporary and eye-witness, the Dutch surgeon Esquemelling, began the game with his "History of the Buccaneers" in 1684. Since then Morgan has figured in every historical account of Jamaica as well as on his own, and his most recent biography, by Mrs. Rosita Forbes, appeared only two years ago. Mr. Lindsay simply retells the story of a character who has, as he puts it, haunted him since childhood. He builds on the known sources and takes an evident delight in the colour and extrav- agance of the West Indian ravages. Unfortunately this tempts him to bolster up his perfectly adequate prose with exasperating outbreaks of inverted sentences, such as "Melancholy must have been Modyford when he greeted Morgan." These, added to more slips and misprints - than can readily be excused in a book of average length, may not have

\ the desired effect on the reader. 'However, Mr. Lindsay's worst faults are on the surface ; essentially hepresents' his crafty and bold privateer without romantic or moral bias, and peels off some of the pigments to test the evidence. Morgan is remarkable not for his sacking and looting of Spanish possessions-that had been done with more savagery before him-but for the luck or personality that procured him Government sanction for his piracy: