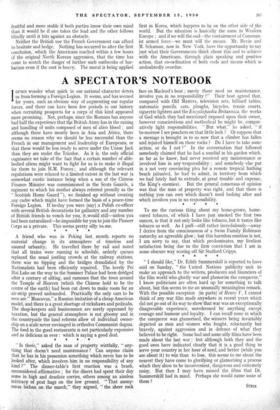 "I should like," Dr. Edith Summerskill is reported to have

said on Sunday, "the United Nations publicity unit to make an approach to the writers, producers and financiers of the film world who glorify war and glamorise the conqueror." I know politicians are often hard up for something to talk about, but this seems to me an unusually meaningless remark. With the possible exception (in parts) of Henry V. I cannot think of any war film made anywhere in recent years which did not go out of its way to show that war was an exceptionally disagreeable experience, unredeemed by anything except courage and humour and loyalty. I can recall none in which the conqueror was glamorised, the winners being invariably depicted as men and 'women who fought, reluctantly but bravely, against aggression and in defence of what they believed to be right. Some bad and some silly films have been made about the last war ; but although both they and the good ones have indicated clearly that it is a good thing to serve your country in her hour of need, and better (while you are about it) to win than to lose, this seems to me about the nearest they have come to glorifying or glamorising a process which they show to be inconvenient, dangerous and extremely noisy. But then I may have missed the films that Dr. Summerskill had in mind. Perhaps she would name some of them ?