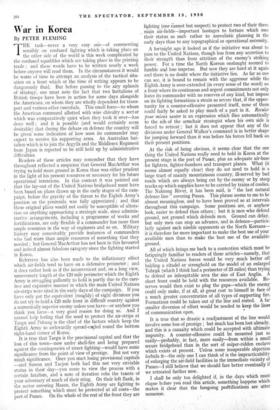 easy one—of commenting sensibly on confused fighting which is taking place on the other side of the world is this week complicated by the confused squabbles which are taking place in the printing trade ; and these words have to be written nearly a week before anyone will read them. In the circumstances it would be waste of time to attempt an analysis of the tactical situ- ation on a front which at the time of writing appears to be dangerously fluid. But before passing to the airy uplands of strategy, one must note the fact that two battalions of British • troops have been in action for some days alongside the Americans, on whom they are wholly dependent for trans- port and various other essentials. This small force—to whom the American command allotted with wise chivalry a sect or which was comparatively quiet when they took it, over—has done well ; and it is possible (and would certainly seem desirable) that during the debate on defence the country will be given some indication of how soon its commander may expect to receive his supporting arms. An Australian bat- talion which is to join the Argylls and the Middlesex Regiment from Japan is reported to be still held up by administrative difficulties.

Readers of these articles may remember that they have throughout reflected a suspicion that General MacArthur was trying to hold more ground in Korea than was either prudent in the light of his present resources or necessary for his future operational intentions. In this context it was pointed out that the lay-out of the United Nations bridgehead must have been based on plans drawn up in the early stages of the cam- paign, before the gravity of the threat to the Eighth Army's position on the peninsula was fully appreciated ; and that these original plans would not easily be susceptible of altera- tion on anything approaching a strategic scale, since adminis- trative arrangements, including a programme of works and fortifications, are only flexible if a commander has more than ample resmirces in the way of engineers and so on. Military history may conceivably provide instances of commanders who had more than ample resources of something that they needed ; but General MacArthur has not been in this favoured and indeed almost fabulous category since the fighting started in Korea.

Reference has also been made to the inflationary effect which air-fields tend to have on a defensive perimeter ; and it docs rather look as if the inconvenient and, on a long- view, unnecessary length of the 120 mile perimeter which the Eighth Army is struggling gallantly to hold is partly due to the care- free and expansive manner in which the main United Nations air-strips were sited in the early days of the campaign. If you have only got the equivalent (roughly) of eight divisions you do not try to hold a 120 mile front in difficult country against a numerically superior enemy unless you have—or anyhow you think you have—a very good reason for doing so. And I cannot help feeling that the need to protect the air-strips at Taegu and Pohang is the chief of the factors which keep the Eighth Army so awkwardly spread-eagled round the bottom right-hand corner of Korea.

It is true that Taegu is the provisional capital and that the loss of this town—now under shell-fire and being prepared against the contingencies of street fighting—would have some significance from the point of view of prestige. But not very mu9h significance. Once you start losing provisional capitals —and Suwon and Taejon both had this not very enviable status in their day—you come to view the process with a certain fatalism, and a note of iteration robs the taunts of your adversary of much of their sting. On their left flank, in the sector covering Masan, the Eighth Army are fighting to protect something which must be protected at all costs—the port of Pusan. On the whole of the rest of the front they are fighting (one —cannot but suspect) to protect two of their three main air-fields—important hostages to fortune which Owe their status as such rather to unrealistic planning‘ in the early days than to any topographical or operational necessity.

A fortnight ago it looked as if the initiative was about to pass to the United Nations, though less from any accretion to their strength than from attrition of the enemy's striking power. For a time the North Korean onslaught seemed to fumble and lose impetus. But now they are hard at it again and there is no doubt where the initiative lies. As far as one can see, it is bound to remain with the aggressor while the Eighth Army is over-extended (in every sense of the word) on a front where its continuous and urgent commitments not only leave its commander with no reserves of any kind, but impose on its fighting formations a strain so severe that, if the oppor- tunity for a counter-offensive presented itself, none of them could fairly be asked to play much of a part in it. Reculer pour mieux sauter is an expression which flies automatically to the nib of the armchair strategist when his othi side is forced to retreat ; but it does not appear that any of the divisions under General Walker's command is in better shape for jumping forward than it was before his forces fell back on their present positions.

At the iisk of being obvious, it seems clear that the one thing the United Nations really need to hold in Korea at the present stage is the port of Pusan, plus an adequate air-base for fighters, fighter-bombers and transport planes. What (it seems almost equally clear) they do not need to hold is a large tract of mainly mountainous country, ill-served by bad roads "which are always being cut by the enemy or by steep tracks up which supplies have to be carried by trains of coolies. The Naktong River, it has been said, is the last natural defence line" covering Pusan. This phrase seems to me to be almost meaningless, and to have been proved so at intervals throughout this campaign. Some positions are, or anyhow look, easier to defend than others ; but it is men who defend ground, not' ground which defends men. Ground can delay, but only men can stop an advance, and in defence—particu-- larly against such nimble opponents as the North Koreans— it is therefore far more important to make the best use of your available men than to make the best use of the available ground.

All of which brings me back to a contention which must be fatiguingly familiar to readers of these articles—namely, that the United Nations forces would be very much better off holding a citadel or stronghold on the model of an enlarged Tobryk (which I think had a perimeter of 25 miles) than trying to defend an inhospitable area the size of East Anglia. A short front could be held with the resources available. Re- serves would then exist to plug the gaps—which the enemy could only make, if at all, at great cost to himself in face of a much greater concentration of all types of supporting fire. Formations could be taken out of the line and rested. A far smaller diversion of effort would be needed to keep the lines of communication open.

It is true that so drastic a readjustment of the line would involve some loss of prestige ; but much has been lost already, and this is a casualty which could be accepted with ultimate impunity. A counter-offensive could be. mounted just as easily—probably, in fact, more easily—from within a small secure bridgehead than in the sort of sniper-ridden enclave which exists at present. Unless some insuperable objection forbids it—the only one I can think of is the impracticability of enlarging the air-field facilities in the immediate vicinity of Pusan—I still believe that we should fare better eventually if we retreated further now.

I shall be only too delighted if, in the days which must elapse b: fore you read this article, something happens which makes it clear that the foregoing porttifications are utter nonsense.