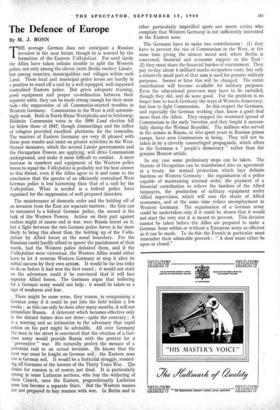 The Defence of Europe

By M. J. BONN THE average German does not anticipate a Russian invasion in the near future, though he is worried by the formation of the Eastern Volkspolizei. For until lately the Allies have taken infinite trouble to split the Western police, not only among the eleven (with Berlin twelve) Lander, but among counties, municipalities and villages within each Land. These local and municipal police levies are hardly in a position to ward off a raid by a well equipped, well organised centralised 'Eastern police. But given adequate training, good equipment and proper co-ordination between their separate units, they can be made strong enough for their main task—the suppression of all Communist-started troubles in Western Germany. Communism in the West is still astonish- ingly weak. Both in North Rhine Westphalia and in Schleswig- Holstein Communist votes in the 1950 Land election fell far below those of 1947, though dismantlings and the influx of refugees provided excellent platforms for the comrades. The masters of Eastern Germany are very ill pleased with these poor results and insist on greater activities in the West. Sterner measures, which the several Lander governments and the Occupation Powers are applying, will drive Communism underground, and make it more difficult to combat. A mere increase in numbers and equipment of the Western police forces to equal the Volkspolizei is probably not the best answer to. this threat, even if the Allies agree to it and come to the conclusion that the spectre of an efficiently centralised West German police is less harrowing than that of a raid by the Volkspolizei. What is needed is a federal police force organised for the suppression of well prepared disorders. .

The maintenance of domestic order and the holding off of an invasion from the East are separate matters ; the first can be entrusted to a federal German police, the second is the task of the Western Powers. Action on their part against raiders might of course end in war, were Russia intent on it, but a fight between the two German police forces is far more likely to bring this about than the holding up of the Volks- polizei by Allied forces at the zonal boundary. For the Russians could hardly afford to ignore the punishment of their wards, had the Western police defeated them, and if the Volkspolizei were victorious, the Western Allies would either have to let it overrun Western Germany or stop it after its initial success by their own armies. It would be far less risky to do so before it had won the first round ; it would not start on the adventure could it be convinced that it will face superior Allied forces. The Germans argue that hollering for a German army would not help ; it would be taken as a sign of weakness and fear. .

There might be some sense, they reason, in reorganising a German army if it could be put into the field 'within a few weeks ; as this can only be done after many months, it will not intimidate Russia. A deterrent which becomes effective only in the distant future does not deter—quite the contrary;. it is a warning and an intimation to the adversary that rapid action on his part might be advisable. All over Germany the man in the street is convinced that the creation of a Ger- man army would provide Russia with the pretext for a t 'preventive" " war. He naturally prefers the menace of a potential raid to an actual invasion. 4e knows that the next war must be fought on German soil ; the Eastern zone too is German soil. It would be a fraticidal struggle, remind- ing all Germans of the horrors of the Thirty Years War. The desire for reunion is, of course, n,ot dead. It is particularly strong in some Lutheran sections, who fear the withering of their Church, once the Eastern,. preponderantly Lutheran zone has become a separate State. But the Western masses are not prepared to buy reunion with wax. In Berlin and in other particularly imperilled spots one meets critics who complain that Western Germany is not sufficiently interested in the Eastern zone.

The Germans have to make two contributions : (1) they have to prevent the rise of Communism in the West, at the same time giving the utmost moral and, where Berlin is concerned, financial and economic support to the East : (2) they must share the financial burden of rearmament. They pay to-day about 4 milliard marks occupation costs, but only a relatively small part of that sum is used for genuine military purposes. Sooner or later this will be changed. The entire contribution will become available for military purposes. Even the educational processes may have to be curtailed, though they -did, and do some good. For the problem is no longer how to teach Germany the ways of Western democracy, but how to fight Communism. In this respect the Germans, and especially the German working class, know a good deal more than the Allies. They stopped the westward spread of Communism in the early 'twenties, and they fought it success- fully during the Weimar Republic. The millions who served in the armies in Russia, or who spent years in Russian prison camps, have seen Communism in being. They will not be taken in by a cleverly camouflaged propaganda, which offers to the Germans a "people's democracy" rather than the genuine Moscow article.

In any case some preliminary steps can be taken. The Statute of Occupation can be transformed into an agreement or a treaty for mutual protection, which lays definite burdens on Western Germany : the organisation of a police capable of maintaining internal order, the payment of a financial contribution to relieve the burdens of the Allied taxpayers, the production of military equipment under Allied supervision, which will ease the strain of Allied economies, and at the same time reduce unemployment in Western Germany. The organisation of a German army could be undertaken only if it could be shown that it would not start the very war it is meant to prevent. This decision cannot be taken before the Allies are prepared to make a German force within or without a European army as efficient as it can be made. To do this the French in particular must remember their admirable proverb : "A door must either be open or closed."