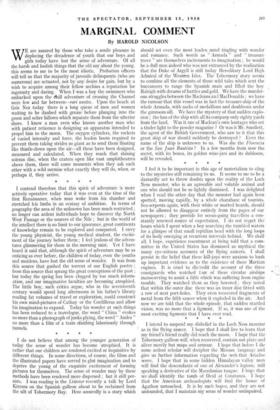 By HAROLD NICOLSON WE are assured by those who take a senile pleasure in deploring the decadence of youth that our boys and girls today have lost the sense of adventure. Of all the harsh and foolish things that the old say about the young, this seems to me to be the most idiotic. Probation officers will'tell us that the majority of juvenile delinquents (who are numerous) are actuated, not by any. desire for gain, but by a wish to acquire among their fellow urchins a reputation for ingenuity and daring. When I was a boy the swimmers who embarked upon the &ill adventure of crossing the Channel were few and far between—rani nantes. Upon the beach at Gris Nez today there is a long queue of men and women waiting to be daubed with grease before plunging into the green and ochre billows which separate them from the ulterior shore. I know a man even who knows another man who with patient reticence is designing an apparatus intended to propel him to the moon. The oxygen cylinders, the rockets of varied intensity and force, the leaden boots required to prevent them taking strides so giant as to send them floating like thistle-down upon the air—all these have been designed, measured and calculated. When they reach that shining solemn disc, when the craters open like vast amphitheatres above them, there will come moments when they ask each other with a wild surmise what exactly they will do, when, or perhaps if, they arrive.

* * * * I contend therefore that this spirit of adventure is more actively operative today that it was even at the time of the first Renaissance, when man woke from his slumber and stretched his limbs in an ecstasy of ambition. In terms of geography the area of the unknown has been much restricted ; no longer can ardent individuals hope to discover the North West Passage or the sources of the Nile ; but in the World of the intellect there is no limit to our ignorance, great continents of knowledge remain to be explored and conquered. I envy the young physicist, the young medical student, the excite- ment of the journey before them ; I feel jealous of the adven- tures glimmering for them in the morning mist. Yet I have heard it said that, although the spirit of adventure may be as enticing as ever before, the children of today, even the youths and maidens, have lost the old sense of wonder. It was from this source that gushed the torrent of our English poetry ; from this source that sprang the great conceptions of the past ; but today the spring has been clogged by too much inform- ation, and our imaginative faculties are becoming atrophied. The little boy, such critics argue, who in the seventeenth century would spend long afternoons in his father's library reading fat volumes of travel or exploration, could construct his own mind-pictures of Cathay or the Cordilleras and allow his imagination to expand. Today his wonder at such things has been reduced to a travelogue, the word " China " evokes no more than a photograph of junks plying, the word" Andes " no more than a film of a train climbing laboriously through tunnels.

I do not believe that among the younger generation of today the sense of wonder has become atrophied. It is rather that our children are rendered excited or inquisitive by different things. In some directions, of course, the films and the illustrated papers have served to glut imagination and to deprive the young of the exquisite excitement of forming pictures for themselves. The sense of wonder may by these methods have been rendered more dispersed ; but it still per- sists. I was reading in the Listener recently a talk by Lord Kinross on the Spanish galleon about to be reclaimed from the silt of Tobermory Bay. Here assuredly is a story which should set even the most leaden mind tingling with wonder and romance. Such words as " Armada" and "treasure trove" are themselves incitements to imagination ; he would be a dull man indeed who was not entranced by the realisation that the Duke of Argyll is still today Hereditary Lord High Admiral of the Western Isles. The Tobermory story seems to combine all the elements of those wild tales which sent the buccaneers to range the Spanish main and filled the boy Raleigh with dreams of battles and gold. We have the murder- ous struggles between the Macleans and MacDonalds ; we have the rumour that this vessel was in fact the treasure-ship of the whole Armada, with sacks of medallions and doubloons under the gunroom sill. We have the mystery of that sudden explo- - sion'; the loss of the ship with all its company only eighty yards from the land. Was it one of Maclean's own hostages who set a tinder light to the powder magazine ? Or was it Mr. Smollett, the agent of the British Government, who saw to it that this great ship of war should suddenly be destroyed ? Even the name of the ship is unknown to us. Was she the Florencia or the San Juan Bautista ? In a few months from now the secret, with its bones, its golden wine-jars and its dubloons, will be revealed.

I feel it to be important in this age of materialism to cling to the mysteries still remaining to us. It seems to me to be a dastardly act to throw doubts upon the reality of the Loch Ness monster, who is an agreeable and volatile animal and one who should not be so lightly dismissed. I was delighted when I read the other day that the monster had again been spotted, moving rapidly, by a whole charabanc of tourists. Sea-serpents again, with their white or matted beards, should not be allowed to disappear entirely from the pages of our newspapers ; they provide for ocean-going travellers a con- stantly renewed source of expectation. I do not regret the hours which I spent when a boy searching the tumbled waters for a glimpse of that small reptilian head with the long loops of its body emerging at recurrent intervals behind. We shall all, I hope, experience resentment at being told that a com- mittee in the United States has dismissed as mythical the many eye-witness accounts of the flying saucers. I shall persist in the belief that these kill-joys were anxious to hush up important evidence as to the existence of these Martian engines. It is cruel to discredit the account of the three coastguards who watched four of these circular airships manoeuvring to assist a fifth which was suffering from engine trouble. They watched them as they hovered ; they noted that within the outer disc there was an inner disc fitted with a row of neat port-holes. They even recovered fragments of metal from the fifth saucer when it exploded in the air. And now we are told that the whole episode, that sudden startled vision, was no more that a figment. If so, it was one of the most exciting figments that I have ever read.

I intend to suspend my disbelief in the Loch Ness monster as in the flying saucer. I hope that I shall live to learn that my friend's friend really did reach the moon. . I hope that the Tobermory galleon will, when recovered, contain not plate and silver merely but maps and armour. I hope that before I die some ardent scholar will decipher the Minoan language and give us further information regarding the web that Ariadne wove. I hope that in some hidden Himalayan valley men will find the descendants of one of Alexander's legions, still speaking a derivative of the Macedonian tongue. I hope that we shall identify the tomb of Ovid at Constanza. I hope that the American archeaologists will find the house of Agathon untouched. It is by such hopes, and they are not unfounded, that I maintain my sense of wonder unimpaired.