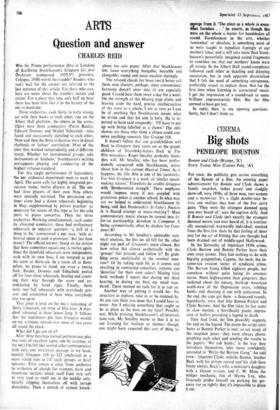 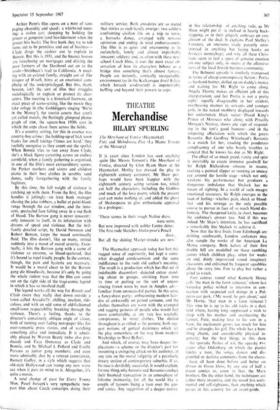 Every Young Man (Cameo Poly, 'A') For once, the publicity gets across something of the flavour of a film. An evening paper advertisement for Bonnie and Clyde shows a family snapshot, rather posed and stodgily show-off, very 1930s, of three men, two women and a motor-car. It's a slight double-take be- fore one realises that four of the five carry guns. 'They were the strangest damned gang you ever heard of,' says the caption drily. And if Bonnie and Clyde isn't exactly the strangest damned movie you ever heard of, it is continu- ally unexpected, waywardly individual, marked from the first few shots by that feeling of sheer zest for the act of filming that one thought had been drained out of middle-aged Hollywood.

In the hierarchy of American 1930s crime, Clyde Barrow and Bonnie Parker have their own stray corner. They had nothing to do with big-city gangsterism, Capone, the mob, the in- come-tax evasion sector of syndicate crime. The Barrow Gang killed eighteen people, but somehow without quite losing its amateur status. More highwaymen than gangsters, they racketed about the uneasy, hard-up American south-west of the Depression years, robbing banks and shooting it out with policemen. In the end, the cops got them: a thousand rounds, legendarily, were shot into-Bonnie Parker and Clyde Barrow. And the film takes its last scene in slow motion, a horrifically poetic impres- sion of bullets pounding a legend to death.

They had lived, the film plausibly suggests, for and on the legend. The poem the script attri- butes to Bonnie Parker is real; so are many of the snapshot poses—they were always photo- graphing each other and sending the results to the papers. 'We rob banks,' is the way _they introduce themselves, later more confidently amended to 'We're the Barrow Gang.' An odd crew: impotent Clyde, volatile Bonnie, brother Buck with his prison record and his club bore funny stories, Buck's wife, a minister's daughter with a klaxon scream, and C. W. Moss the midget mechanic, fan of Myrna Loy, who fatuously prides himself on parking the get- away car so tightly that it's impossible to drive it out. Arthur Penn's film opens on a note of ram- paging absurdity and speed: a whirlwind meet- ing; a stolen car; shopping by holding the grocer at gunpoint (and bewilderment when the grocer hits back). The first bank they try to rob

turns out to be penniless and out of business— Clyde drags the cashier out to explain to Bonnie. But this is 1931, and the finance houses

are foreclosing on mortgages and driving the poor farmers of the Dustbowl out on to the roads—Steinbeck's trail to California. A meet- ing with an evicted family, straight out of The Grapes of Wrath, hints at an emotional com- plicity of the underprivileged. But this, thank heaven, isn't the sort of film that struggles sociologically to explain or protect its char- acters. The meeting is a historical footnote, an

exact piece of scene-setting, like the movie they take refuge in (the Golddiggers singing 'We're in the Money'), the tourist courts that aren't yet called motels, the fleetingly glimpsed photo- graph of FDR, the square-box 1930s cars in which the cops chase them across the fields.

It's a country setting, for this in essence was country-boy crime: the holding-up of hick town banks for small takings (limes are hard,' they ruefully recognise as they count out the spoils). When Bonnie tries to run away from Clyde, she's a black figure careering across an endless cornfield; when a family gathering is organised, in one of the film's most extraordinary scenes, the Parker mothers and sisters and children picnic in their best clothes in scrubby sand dunes, sadly foregathering with the family fugitives.

By this time, the full weight of violence is catching up with them. From the first, the film handles it joltingly—an irate bank manager chasing the joke robbers, a bullet at point-blank range through the car window, and the inno- cent, spectacled face falling away in a red flash of blood. The Barrow gang is never innocent: only innocent to itself, in its infatuation with dreams of speed and violence. But the bril- liantly detailed script, by David Newman and Robert Benton, keeps the mood continually fluid. The film doesn't, like so many, retreat suddenly into a mood of moral severity. Even- tually, it hits the Barrow gang with a scene of violence so extreme, so blood-spattered, that it's bound to repel kindly people. In the context, though, the pain and hysteria are necessary. It would be a moral cheat to let the Barrow gang die bloodlessly, because it's only by going the whole violent way that the film can come out on the right side of the tragi-comic legend in which it has so involved itself.

The legend works all the way for Bonnie and Clyde (were they really shot down outside a town called Arcadia?): chilling, insolent, ridi- culous, and with an odd sense of old-fashioned small-town respectability breaking through the violence. There's a feeling, thanks to the director's consciously oblique angle of vision, both of turning over fading newspaper files for over-romantic press stories, and of watching something alive and immediate. It is admir- ably played by Warren Beatty (who also pro- duced) and Faye Dunaway as Clyde and Bonnie, and by Michael J. Pollard and Estelle Parsons as junior gang members; and even more admirably shot by a veteran cameraman, Burnett Guffey, in a style which suggests that old-style Hollywood can trump any new wave ace when it puts its mind to it. Altogether, it's quite a movie.

military service. Both anecdotes are so muted that stories as such hardly emerge: two soldiers confronting civilian life on a trip to town; a barracks dance, arranged with nervous optimism and ending in total embarrassment. The film is as quiet and unassuming as its melancholy, lonely and almost improbably innocent soldiers; and, as often with these new- school Czech films, it uses the most exact ob- servation of how its characters behave as a bridge into something that's almost fantasy. People are instantly, comically recognisable: environment (as in the Kafkaesque Josef Klhoe which Juracek co-directed) is impenetrably baffling and beyond their powers to cope.