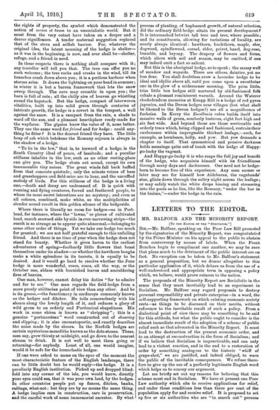 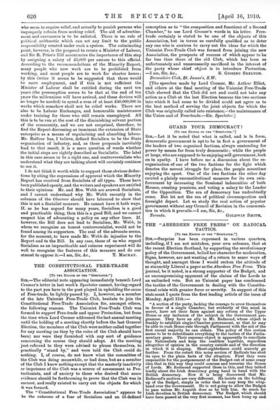 MR. BALFOUR AND THE MINORITY REPORT.

ITO THE EDITOR OP THE " SPECTATOR...1

Srn,—Mr. Balfour, speaking on the Poor Law Bill promoted by the signatories of the Minority Report, was congratulated by the Prime Minister on his appeal to the public to abstain from controversy by means of labels. When the Front Benches begin to compliment one another, we may be sure that plans much to the detriment of the public interest are on foot. No exception can be taken to Mr. Balfour's statement as a general proposition, but we demur altogether to this particular application of it, which debars us from the use of a well-understood and appropriate term in opposing a policy which, we believe, would prove ruinous to the nation.

The proposals of the Minority Report are Socialistic in the sense that they must inevitably lead to an experiment in Socialism. Mr. Balfour may regard proposals to destroy personal responsibility and private enterprise—in a word, the self-supporting framework on which existing economic society rests—as things to be discussed on their merits, without reference to the inevitable result of such a policy. From a dialectical point of view there may be something to be said for this attitude, but what the public ought to consider is the almost immediate result of the adoption of a scheme of public relief such as that advocated in the Minority Report. It must lead to the destruction of the present economic order, and to an attempt at reconstruction in the form of Socialism; and if we believe that Socialism is impracticable, and can only lead to a violent reaction, and in the end to a restoration of order by something analogous to the historic "whiff of grape-shot," we are justified, and indeed obliged, to warn the public of the inevitable consequences. We refuse there- fore to give up the use of a perfectly legitimate English word which helps us to convey our argument.

Let me briefly set out my reasons for believing that this scheme must end in Socialism. We have at present one Poor Law authority which site to receive applications for relief, and under these conditions less than three per cent. of the population apply for and receive relief. It is proposed to set up five or six authorities who are "to search out" persons who seem to require relief, and actually to punish persons who improperly refrain from seeking relief. The aid of advertise- ment and canvassers is to be enlisted. There is no rule of political arithmetic which can set any limit to the public responsibility created under such a system. The culminating point, however, is the proposal to create a Minister of Labour, and Sir R. Price's Bill accentuates the importance of this step by assigning a salary of £5,000 per annum to this official. According to the recommendations of the Minority Report, many people who now work are to be prohibited from working, and most people are to work for shorter hours ; by this eevice it seems to be suggested that there would be more employment, and if this is not sufficient the Minister of Labour shall be entitled during the next ten years (the presumption seems to he that at the end of ten years the millennium will have arrived, and these devices will no longer be needed) to spend a sum of at least £40,000,000 in works which somehow shall not be relief works. There are also to be Labour Exchanges, and honourable maintenance under training for those who still remain unemployed. All this is to be run at the cost of the diminishing solvent portion of the community, and we are not surprised, therefore, to find the Report discussing as imminent the extension of State enterprise as a means of regularising and absorbing labour. Mr. Balfour has, I believe, defined Socialism to be the State organisation of industry, and, as these proposals inevitably lead to that result, it is a mere question of words whether the initial steps are rightly described as Socialistic. The label in this case seems to be a right one, and controversialists who understand what they are talking about will certainly continue to use it.

I do not think it worth while to support these obvious deduc- tions by citing the expressions of approval which the Minority Report has received from Socialists of all types. These have been published openly, and the writers and speakers are entitled to their opinions. Mr. and Mrs. Webb are avowed Socialists, and I cannot understand why Mr. Webb recently in the columns of the Observer should have laboured to show that this is not a Socialist measure. He cannot have it both ways. If, as he has argued for many years, Socialism is a good and practicable thing, then this is a good Bill, and we cannot suspect him of advocating a policy on any other lines. If, however, the Bill does not lead to Socialism, Mr. Webb, in whom we recognise an honest controversialist, would not be found among its supporters. The zeal of the advocate seems, for the moment, to have made Mr. Webb do injustice to the Report and to the Bill. In any case, those of us who regard Socialism as an impracticable and ruinous experiment will do well to recognise the features of this measure and do our utmost to oppose it.--I am, Sir, &c., T. MACKAY.