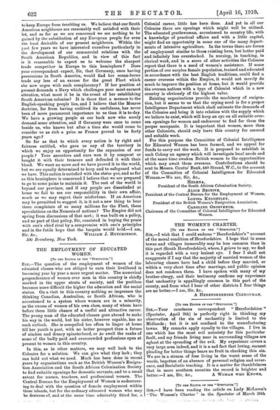 THE EMPLOYMENT OF EDUCATED WOMEN.

[To THE EDITOR OF THE "SPECTATOR."' SIR,—The question of the employment of women of the educated classes who are obliged to earn their livelihood is becoming year by year a more urgent matter. The numerical preponderance of women over men in this country is chiefly marked in the upper strata of society, and the problem becomes more difficult the higher the education and the social status. On a visit to this country nothing so impresses the thinking Canadian, Australian, or South African, who is accustomed to a system where women are in a minority, as the excess of women of his own class, many of whom have before them little chance of a useful and attractive career•. The young man of the educated classes goes abroad to make his way in the world, but his sister, however capable, has no such outlook. She is compelled too often to linger at home till her youth is past, with no better prospect than a future of aimless and dreary spinsterhood, or to swell the ranks of some of the badly paid and overcrowded professions open at present to women in this country.

In this, as in other matters, we may well look to the Colonies for a solution. We can give what they lack ; they can bold out what we need. Much has been done in recent years by organisations such as the British Women's Emigra- tion Association and the South African Colonisation Society to find suitable openings for• domestic servants, and to a small extent for nurses, teachers, and professional women. The Central Bureau for the Employment of Women is endeavour- ing to deal with the question of female employment within these islands, but for the ordinary educated woman who may be desirous of, and at the same time admirably fitted for, a Colonial career, little has been done. And yet in all our Colonies there are openings which might well be utilised. The educated gentlewoman, accustomed to country life, with a knowledge of practical affairs and with a little capital, might find an opportunity in some one of the many depart- ments of intensive agriculture. In the towns there are forms of employment similar to those existing here, but better• paid and infinitely less overstocked. In nursing, in teaching, in clerical work, and in a score of other activities the Colonies report that there is a need of women's assistance. If some portion of our surplus female population, trained and educated in accordance with the best English traditions, could find a. career overseas within the Empire, it would not merely do much to improve the position at home, but it would provide the oversea nations with a type of Colonist which in a new country is obviously of the highest value.

Existing organisations provide the machinery of emigra- tion, but it seems to us that the crying need is for a proper Intelligence Department which shall estimate the demands of the Colonies and bring it into relation with the supply which we believe to exist, which will keep an eye on all suitable over- sea openings for women and endeavour to find for them the proper occupants. It is important that women, more than other Colonists, should only leave this country for assured and suitable work.

For this purpose the Committee of Colonial Intelligence for Educated Women has been formed, and we appeal for funds to can-y out the work. It is proposed to establish in each Colony an agency which will investigate local needs and at the same time awaken British women to the opportunities which may await them overseas. Contributions should be sent to Messrs. Coutts' Bank, 440 Strand, W.C., to the account of the Committee of Colonial Intelligence for Educated Women.—We are, Sir, &c.,

President of the Central Bureau for the Employment of Women.

Chairman of the Committee of Colonial Intelligence for Educated Women.