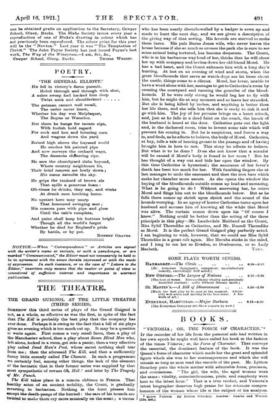 THE GRAND GUIGNOL AT THE LITTLE THEATRE (THIRD SERIES).

SomEnow this third series of plays of the Grand Guignol is not, as a whole, as effective as was the fiist, in spite of the fact that The Kill is probably the beet play that the company has ever done. Perhaps it is owing to the fact that a bill of six plays gives an evening which is too much cut up. It may be a question of waits Again. First comes a very small farce, then a play of the Manchester-school, then a play about Seven Blind Men who, left alone, looked in a room, get into a panic ; then a very effective play called Dead Man's Pool, whose secret nothing shall tear from me ; then the aforesaid The Kill, and then a sufficiently funny little comedy called The Chemist. In such a programme we certainly feel, among other things, the lack of the element of the fantastic that in their former series was supplied by that most sympathetic of revues Oh, Hell ! and later by The Tragedy 4 Mr. Peach.

The Kill takes-place in a remote chateau in France. That healthy scion of an ancient nobility, the Count, is gradually reverting to barbarism. Nothing in the hunt pleases him except the death-pangs of the hunted : the ears of his hounds are twisted to make them cry more musically on the scent ; a terrier who has been nearly disembowelled by a badger is sewn up and made to hunt the next day, and we are given a description of the giving way of that sewing. His hounds are starved to make them fierce. His pale Burns Jones wife, who never leaves the house because if she so much as crosses the park she is sure to see some animal being tortured, has become desperate. The Count, who is in his barbarous way fond of her, thinks that he will cheer her up with company and invites down her old friend Morel. He has .a bad heart, and the Count exhausts him with a long day's hunting. At last on an evening of wind and storm, when the great bloodhounds that serve as watch-dogs are let loose about the castle, things come to a climax. Morel, her lover, unable to have a word alone with her, manages to get to Catherine's room by crossing the courtyard and running the gauntlet of the blood- hounds. If he were only strong he would beg her to fly with him, but he might die at any moment and so leave her stranded. But she is being killed by inches, and anything is better than her life there, and she tells him that she is ready to risk it and go with him. The joy of her promise brings on a heart attack, and, just as he falls in a dead faint on the couch, the knock of the husband is heard at the door. Catherine;puts out the light and, in the darkened room, tries to invent some tale which will prevent his coming in. But he is suspicious, and forces a way in, and finds, as he affects to believe, the body of Morel. Catherine, at bay, tells a tale of hearing groans in the passage and of having brought him in here to rest. This story he affects to believe. But what is to be done ? Does she not know that a scandal will be caused if Morel's body is found in her room ? But he has thought of a way out and bids her open the window. By this time Catherine is hysterical ; the assurance of her lover's death has been too much for her. With fumbling fingers she at last manages to undo the casement and then the iron bars which make her chamber more secure. As she opens the window the baying of the bloodhounds outside comes up loud and menacing. What is he going to do ? Without answering her, he seizes Morel and flings him out to the bloodhounds below. But as he falls there comes up shriek upon shriek and the sound of the hounds worrying. In an agony of horror Catherine turns upon her husband and accuses him of knowing all the while that Morel was alive. The curtain comes down upon his " Of course I knew." Nothing could be better than the acting of the three principals in this play—Mr. Lauderdale Maitland as the. Count, Miss Sybil Thomdike as Catherine, and Mr. Russell Thorndike as Morel. it is the perfect Grand Guignol play perfectly acted. I am beginning to wish, however, that we could see Miss Sybil Thorndike in a great role again. Her Hecuba sticks in the mind, and I long to see her as Evadne, as Desdemona, or as Lady