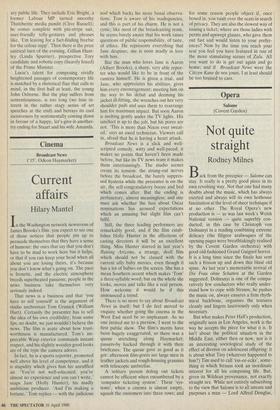 In the Washington network newsroom of James Brooks's film, you expect to see one of those notices that people pin up to persuade themselves that they have a sense of humour: the ones that say that you don't have to be mad to work here but it helps, or that if you can keep your head when all about you are losing theirs, it's because you don't know what's going on. The pace is frenetic, and the electric atmosphere breeds superheated passions; people in the news business take themselves very seriously indeed.

That news is a business and that 'you have to sell yourself is the argument of studio anchorman Tom Grunick (William Hurt). Certainly the presenter has to sell the idea of his own credibility; from some lips, no doubt, we just wouldn't believe the news. The film is acute about how trust- worthiness is manufactured. Tom's im- peccable Wasp exterior commands instant respect, and his slightly wooden good looks are of the type the camera adores.

In fact, he is a sports reporter, promoted well above his level of competence, and it is stupidity which gives him his unruffled air. 'You're not well-educated, you've almost no experience and you can't write,' snaps Jane (Holly Hunter), his madly ambitious producer. 'And I'm making a fortune,' Tom replies — with the judicious nod which backs his more banal observa- tions. Tom is aware of his inadequacies, and this is part of his charm. He is not a cynic; like most of the broadcasting team, he seems barely aware that his work raises questions of public responsibility, of taste, of ethics. He represents everything that Jane despises; she is soon madly in love with him.

But the man who loves Jane is Aaron (Albert Brooks), a sharp, very able repor- ter who would like to be in front of the camera himself. He is given a trial, and Jane, who appreciates his abilities, gives him every encouragement: meeting him on the way to his debut and deeming his jacket ill-fitting, she wrenches out her very shoulder pads and uses them to rearrange him for maximum impact. But soon Aaron is melting gently under the TV lights. His intellect is up to the job, but his pores are not. 'This is more than Nixon ever sweat- ed,' says an awed technician. Viewers call in, afraid that he is having a heart attack.

Broadcast News is a slick and well- scripted comedy, witty and well-paced; it makes no points that haven't been made before, but like its TV news team it makes them entertainingly. The studio scenes create its tension: the strung-out nerves before the broadcast, the barely suppres- sed hysteria while the presenter is on the air, the self-congratulatory booze and bed which comes after. But the ending is perfunctory, almost meaningless; and one must ask whether the fuss about Oscar nominations has aroused expectations which an amusing but slight film can't fulfil.

Still, the three leading performers are remarkably good, and if the film estab- lishes Holly Hunter in the affections of casting directors it will be an excellent thing. Miss Hunter starred in last year's Raising Arizona, a strange, droll film which should not be classed with the current silly baby movies, even though it has a lot of babies on the screen. She has a mean Southern accent which makes 'Tom' a three-syllable word; but on the whole she looks, moves and talks like a real person. How welcome it would be if this announced a trend.

There is no more to say about Broadcast News in itself; but I do feel moved to enquire whether going the cinema in the West End need be so unpleasant. As no one invited me to a preview, I went to the first public show. The film's merits have been hugely exaggerated, so there was a queue stretching along Haymarket; passers-by hacked through it with their briefcases. The queue gave as good as it got: afternoon film-goers are large men in leather jackets and rough-housing grannies with telescopic umbrellas.

A solitary person doling out tickets cannot be efficient when encumbered by a 'computer ticketing system'. These 'sys- tems', when a cinema is almost empty, squash the customers into three rows; and

for some reason people object if, once boxed in, you vault over the seats in search of privacy. They are also the slowest way of issuing a ticket; where are those ladies with perms and upswept glasses, who gave them out fast and would listen to your prefer- ences? Now by the time you reach your seat you feel you have featured in one of the more stimulating scenes of Zulu. All you want to do is get out again and go home; and if Broadcast News were the Citizen Kane de nos jours, I at least should be too bruised to care.