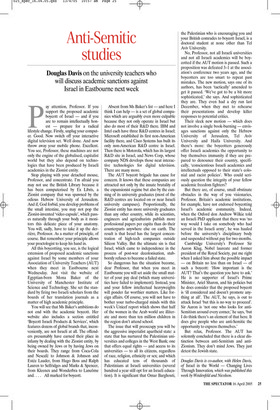 Douglas Davis on the university teachers who will discuss academic sanctions against Israel in Eastbourne next week Pay attention, Professor. If you support the proposed academic boycott of Israel — and if you are to remain intellectually honest — prepare for a radical lifestyle change. Firstly, unplug your computer. Good. Now switch off your interactive digital television set. Well done. And now throw away your mobile phone. Excellent. You see, Professor, these machines are not only the engine of the globalised, capitalist world but they also depend on technologies that have been produced by Israeli academics in the Zionist entity.

Stop playing with your detached mouse, Professor, and concentrate. I’m afraid you may not use the British Library because it has been computerised by Ex Libris, a Zionist company that was spawned by the odious Hebrew University of Jerusalem. And if, God forbid, you develop problems of the small intestine, you may not pop the Zionist-invented ‘video capsule’, which passes naturally through your body as it monitors this delicate piece of your anatomy. You will, sadly, have to take it up the derrière, Professor. As a matter of principle, of course. But remember: your principle allows your proctologist to keep his hand in.

All this boycotting, you see, is the logical extension of proposed academic sanctions against Israel by some members of your Association of University Teachers (AUT) when they meet in Eastbourne next Wednesday. Just visit the website of Egyptian-born Mona Baker of the University of Manchester Institute of Science and Technology. She set the standard by firing two Israeli scholars from the boards of her translation journals as a matter of high academic principle.

You will see that Ms Baker’s ambitions do not end with the academic boycott. Her website also includes a section entitled ‘Boycott Israeli Products & Services’, which features dozens of global brands that, inconveniently, are not Israeli at all. The offenders presumably have earned their place in infamy by dealing with the Zionist entity, by being owned by Jews or by having Jews on their boards. They range from Coca-Cola and Nescafé to Johnson & Johnson and Estée Lauder, from Hugo Boss and Ralph Lauren to Selfridges and Marks & Spencer, from Kleenex and Wonderbra to Lancôme and.... All marked for boycott. Absent from Ms Baker’s list — and here I think I can help — is a set of global companies which are arguably even more culpable because they not only operate in Israel but also do most of their R&D there. IBM and Intel each have three R&D centres in Israel; Microsoft established its first non-American facility there, and Cisco Systems has built its only non-American R&D centre in Israel. Then there is Motorola, which has its largest R&D site in Israel, and News Corp, whose company NDS develops those neat interactive technologies for digital television. There are many more.

The AUT boycott brigade has cause for concern. It knows that these companies are attracted not only by the innate brutality of the expansionist regime but also by the cunning of its university graduates (most of the R&D centres are located on or near Israeli university campuses). Proportionally, the Zionist entity has more university graduates than any other country, while its scientists, engineers and agriculturists publish more professional papers per capita than do their counterparts anywhere else on earth. The result is that Israel has the largest concentration of high-tech companies outside Silicon Valley. But the ultimate sin is that Israel, which came to independence in the process of post-war decolonisation, stubbornly refuses to become a failed state.

So dangerous has the situation become, dear Professor, that when you meet in Eastbourne you will set aside the small matter of your pay deal (which many universities have failed to implement). Instead, you and your fellow intellectual heavyweights will ponder far worthier matters. Like foreign affairs. Of course, you will not have to bother your turbo-charged minds with this week’s Unicef report which shows that half of the women in the Arab world are illiterate and more than ten million children in the region don’t attend school.

The issue that will preoccupy you will be the aggressive imperialist apartheid state: a state that has nurtured the Palestinian universities and colleges in the West Bank; one that offers equal rights — and access to its universities — to all its citizens, regardless of race, religion, ethnicity or sex; and which has educated tens of thousands of Palestinians at Israeli universities (several hundred a year still opt for an Israeli education). It is significant that Omar Barghouti, the Palestinian who is encouraging you and your British comrades to boycott Israel, is a doctoral student at none other than Tel Aviv University.

No, Professor, not all Israeli universities and not all Israeli academics will be boycotted if the AUT motion is passed. Such a proposition was defeated 3–1 at the association’s conference two years ago, and the boycotters are too smart to repeat past mistakes. The new motion, says one of its authors, has been ‘tactically’ amended to get it passed. ‘We’ve got to be a bit more sophisticated,’ she says. And sophisticated they are. They even had a dry run last December, when they met to rehearse their presentations and develop killer responses to potential critics.

Their sleek new motion — which does not involve a single book-burning — envisages sanctions against only the Hebrew University of Jerusalem, Tel Aviv University and Haifa University. And there’s more: the boycotters generously offer Israeli academics the opportunity to buy themselves immunity if they are prepared to denounce their country, specifically, ‘conscientious Israeli academics and intellectuals opposed to their state’s colonial and racist policies’. Who could seriously question the integrity of your fellow academic freedom fighters?

But there are, of course, small obstinate obstacles in the way of you visionaries, Professor. Britain’s academic institutions, for example, have not endorsed boycotting Israel’s academic community. Indeed, when the Oxford don Andrew Wilkie told an Israeli PhD applicant that there was ‘no way would I take on somebody who had served in the Israeli army’, he was hauled before the university’s disciplinary body and suspended without pay for two months.

Cambridge University’s Professor Sir Aaron Klug, Nobel laureate and former president of the Royal Society, put me right when I asked him about the possible impact — on Britain no less than on Israel — of such a boycott: ‘How important is the AUT? That’s the question you have to ask.’ He is no supporter of Israel’s Prime Minister, Ariel Sharon, and his policies but he does consider that the proposed boycott is ‘ill considered and doesn’t promote anything at all’. The AUT, he says, is out to attack Israel ‘but this is no way to proceed’. Sir Aaron is ‘not one who looks for antiSemitism around every corner,’ he says, ‘but I do think there’s an element of that here. It does give people who are anti-Semitic the opportunity to express themselves.’ But relax, Professor. The AUT has solemnly concluded that there is a clear distinction between anti-Semitism and antiZionism. They don’t mind Jews. They just detest the Jewish state.