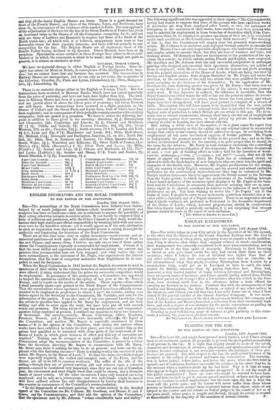 TRAINING FOR THE BAR.

SIR—Yon have hit, and might have pressed much further, what I have always used as an argument against all proposals to prevent the most perfect accessibility of all persons to the bar. It is right that inquiry should be made of the talent, character, and knowledge, of attornies, physicians, and apothecaries--and also of divines, because ordination is not revocable—before the privileges of these pro- fessions are granted. But with respect to the bar, the professional business of its members is the subject of constant and harassing examination. The examina- tion is before judges, before juries, and before the press, when the first brief is opened; and it continues, however successful the entrance on his career may be, to the moment when a barrister shuts up his last brief Why is it that to many who appear to begin with business altogether disappear? Is it not the result of this public examination? There are some who might be entitled to have busi- ness, and have no luck to get it, and are passed unnoticed, or have not the private means to continue to solicit employment; but the more open the bar is kept the more will the public gain; and its honour will never suffer from those whose poverty or limited means compel them to greater labour than others, while all are subject to the control and the rebuke as well of judges in the courts of law as of the press itself, whose praise is sought and desired, though its service is treated

as discreditable by the majority of the members of certain circuits. F.