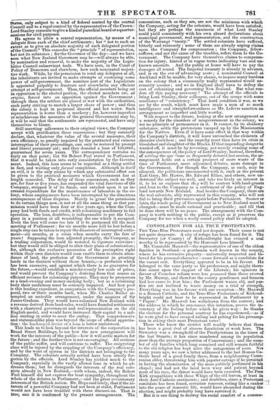 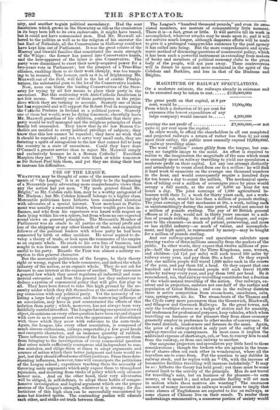 Page 13, 16 August 1845 — CONSOLATION FOR ALL TRUE PROTESTANTS. THE True-Blue Protestants need not
Close

CONSOLATION FOR ALL TRUE PROTESTANTS. THE True-Blue Protestants need not

despair. Their cause is not yet quite desperate. A city of refuge has been found for it. The Stewartry (or County) of Kirkcudbright has evinced a zeal worthy to be represented by Sir Harcourt Lees himself.

Mr. Constable Maxwell—the representative of one of the oldest families in Scotland—a gentleman well known in the county, where he has extensive property—universally respected and be-

loved for his personal character—came forward as a candidate for the vacant seat. Everything appeared to be in his favour. He

belonged to the same party as his predecessor, and might there-

fore count upon the support of the Liberals ; his opinions in favour of Corn-law reform were less prononce than those avowed

by Mr. Murray, and therefore the county gentlemen and farmers had less cause to fear him ; the Parliament waxes old, and par- ties are not inclined to waste money on a trial of strength. Everything was in his favour with one exception—Mr. Maxwell

is a Roman Catholic, and the True-Blue Protestants of Kirkcud- bright could not bear to be represented in Parliament by a "Papist." Mr. Maxwell has withdrawn from the contest ; and the address in which he announces this intention, proves the in- veteracy of the feeling before which he gives way : he thanks the electors for the personal courtesy he has experienced,—as if he were glad to have escaped railing and pelting for his presump- tion in asking their most Protestant votes Those who know the district will readily believe that there has been a good deal of sincere fanaticism at work here. The Stewartry was a stronghold of the Presbyterians in the times of the last Stuarts ; it has since numbered among its population more than the average proportion of Cameronians ; and the num-

to the old religion has kept alive the antagonism of sects. Not many years ago, we saw a letter addressed to the last Roman Car

tholic head of a good family there, from a neighbouring Came- ronian elder, threatening him with popular outrage if he persistgl in having the abomination of the mass publicly performed in his

chapel; and had not the laird been wary and patient beyona most of his race, the threat would have been executed. The Free Kirk sympathizes with these Whigs of the old leaven, at least in their Anti-Catholic sentiments ; and doubtless, since a Protestan,t,r candidate has been found, sectarian rancour, eating like a canker .- into the peace of domestic life, would have abounded during the election, and might probably long have survived it. But it is one thing to destroy the social comfort of a commu- nity, and another to gain political ascendancy. Had the sour fanaticism which grows in the Stewartry as rife as the cranberries in its bogs been left to its own endeavours, it might have teased, but it could not have commanded men. Had Mr. Maxwell ad- hered to the politics as well as to the religion of his ancestor the last Earl of Nithsdale, all the Cameronians in Galloway could not laave kept him out of Parliament. It was the great estates of the Murray and Oswald families that constituted the main strength of the Whigs : the former has passed into Conservative hands, and the heir-apparent of the latter is also Conservative. The party were disinclined to exert their newly-acquired power for a two-years vote in Parliament ; but the prospect of a True-Blue alliance, enabling them to do their work cheaply, was too tempt- ing to be resisted. The honour, such as it is, of frightening Mr. Maxwell out of the field, will fall to the lot of exalt& Presby- terians, the substantial gain to the lot of the Conservative leaders. Now, none can blame the leading Conservatives of the Stew- artry for trying by all fair means to place their party in the ascendant. But this coalescing with Anti-Catholic fanaticism is not fair means. Scarcely one of them participates in the preju- dices which they are turning to account. Scarcely one of them but has supported and will support Sir Robert Peel in recognizing the Catholic Prelates in Ireland as a political power. Scarcely one of them but would, were he dying tomorrow, cheerfully leave Mr. Maxwell guardian of his children, confident that their pro- would be well managed and the religious principles of their pro- perty left unassailed. They know that by the law- Roman Ca- tholics are entitled to every political privilege of subjects; they know that this law cannot be repealed ; they have no wish that It should be repealed ; and yet, to serve very small ends, they are fostering a spirit of antagonism to the law that cannot fail to keep the country in a state of uneasiness. Could they have done O'Connell a greater service than to reject Mr. Maxwell simply and exclusively because he is a Roman Catholic? Excellent Marplots they are ! They would vote black or white tomorrow as Sir Robert Peel bids them, and yet they are doing their best to increase his difficulties.