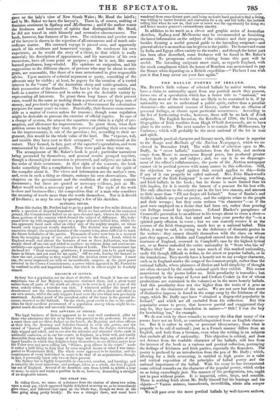 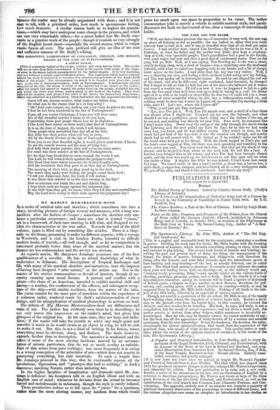 THE BALLAD POETRY OF IRELAND.

MR. DUFFY'S little volume of selected ballads by native writers, who. have a claim to nationality apart from any poetical merit they possess, forms one of a speculation which has a better title to " national," we fear, than most of the works that are likely to be contained in it, if by nationality we are to understand a public spirit, rather than a peculiar character—the animated essence of history, rather than an effusion of personal feelings, or chants upon particular occurrences. According to the list of forthcoming works, however, there will be no lack of Irish subjects. The English Invasion, the Rebellion of 1798, the Union, and biographies of Irish worthies from Hugh O'Neill downwards, are to have place in the series. The next number is to contain The Ribbonman,by Carleton ; which will probably be the most national of the lot in tone and spirit.

As regards poetical character and literary merit, this volume is superior to the Songs and Ballads of' the Nation Newspaper, which we re- viewed in December 1843. The wide field of selection open to Mr. Duffy, in " street ballads," translations from the Irish, and modern songs from Moore to anonymous Repeal poets, has produced greater variety both in style and subject ; and, we say it in no disparage- ment of the editor's collaborateurs, the poets of the Nation newspaper cannot vie in poetical powers with many names in this collection. Still, the objection we urged against that recueil applies to this—little if any of it can properly be called national. Mrs. Price Blackwood's "Lament of the Irish Emigrant" is one of the most pleasing, touching, and Irish ballads in the book ; but its theme is more limited than its title implies, for it is merely the lament of a peasant for his lost wife. The only allusions to the country are in the last two stanzas, and amount to little more than "111 not forget old Ireland." Some of Banim's and Griffin's ballads are good as poetry, and the subjects relate to the people and their Wrongs; but they seem written "in character"—as if the poet were employed on a theme that had been set, rather than pouring - out feelings roused by experience. Colonel Blacker's paraphrase of Cromwell's peroration to an address to his troops about to cross a river—. "Pet your trust in God, but mind and keep your powder dry "—is a spirited party effusion in verse ; but we can scarcely receive it as the essence of the Irish Orangeman, much less as a national ballad. This defect, it may be said, is owing to the deficiency of dramatic genius in the writers : they cannot identify themselves with the class on whose part they appear, as Dibdin and Campbell entered into the feelings of the mariners of England, crowned in Campbell's case by the highest lyrical art, or as Burns embodied the entire nationality in "Scots wha bee wr Wallace bled." But we do not trace much of this marked nationality, easily felt though difficult to define, in the street or popular ballads, or an the translations. They mostly have a homely not to say a vulgar character, such as in England marks the songs of the common people, rather than the national ballads, where plainness of diction and bold simplicity of thought are often elevated by the sturdy national spirit they exhibit. This seems nonexistent in the poems before us. Irish peculiarity is traceable; but as frequently in time songs of Lover and Crofton Croker (a few of whose productions are contained in the volume) as in the more homely ballads. And this peculiarity does not rise higher than the traits of a gens as opposed to the character of the natio. We are not sure but that more of distinctive impress is found in the songs sung by the Irishman of the stage. which Mr. Duffy says have "obtained a disgraceful popularity in Ireland," and which are all excluded from his collection. But this popularity seems to prove, that however partial and exaggerated they may be, they have some foundation in nature—" Och ! I was the boy for bewitching 'em," for example. We do not wish by these remarks to convey the idea that many of the poems have not an Irish, as contradistinguished from an English charac- ter. But it is rather in style, or personal idiosyncracy, than what is properly to be caliml national ; just as a French manner differs from an English, and botim from a German, even when the writing is on subjects that exclude all idea of nationality. This objection is critical, and doei not detract from the readable character of the ballads, still less from the interest of the book as a various and poetical collection, portraying the feelings of Irishmen and Irish parties, especially the R,epealers. The poetry is prefaced by an introduction from the pen of Mr. Duffy; which, allowing for a little overrating, is entitled to high praise as a calm and critical exposition of the principles of ballad poetry and the national importance of the ballad. With his essay hc has incorporated some critical remarks on the character of the popular poetry, which strike us as being exceedingly just. The manner of the prolegomena, too, ought not to pass without praise. It is impartial, sober, large, and sensible. There is nothing Irish about Mr. Duffy himself but his leanings and his objects—" Vastus animus, immoderate, incredibilia, nimis site Beaver cupiebat." We will pass over the more poetical ballads by well-known whore, because the reader may be already acquainted with them ; and it is not easy to tell, with a practised artist, how much is spontaneous feeling, how much dramatic. A similar reason leads us to neglect the transla- tions,—which may have undergone some change in the process, and which are not very remarkable either,—for a street ballad that Mr. Duffy war- rants as a genuiue work of the people ; though it reminds us very strongly of the English broad sheet—especially the second stanva, which is vulgar rustic Saxon all over. The note prefixed will give an idea of the neat and sufficient manner of Mr. Duffy's editing.

nits SORROWFUL LAMENTATION OF CALLAGHAN, GREALLY, AND morxeri, KILLED AT THE FAIR OF TURLOUGHMORE.

[This is a genuine ballad of the people, written and sung among them. The reader win see at once how little resemblance it bears to the pseudo Irish songs of the stage, or even to the street ballads manufactured by the ballad-singers. It is very touching, and not without a certain unpremeditated grace. The vagueness which leaves entirely untold the story it undertook to recount, is a common characteristic of the Anglo-Irish songs of the people. The circumstance on which it Is founded took place two years ago, at the fair of Darrynacloughery, held at Turloughmore. A faction-fight having occurred at the fair, the arrest of some of the parties led to an attack on the police ; atter the attack had abated or ceased, the pollee fired on the people, wounded several, aud killed the three men whose names stand at the head of the ballad. They were Indicted for murder, and pleaded the order of Mr Drew, the Stipendiary Magistrate ; *Ma was admitted as ajustification. Drew died before the day appointed for his trial.]

Come tell me, dearest mother, what makes my father stay, Or what can be the reason that he's so long away ? " Oh ! hold your tongue, my darling son, 'our tears do grieve me sore,

I fear he has been murdered in the fair of Turloughmore."

Come all you tender Christians, I hope you will draw near; It's of this dreadful murder I mean to let you hear,

Concerning those poor people whose loss we do deplore—

(The Lord have mercy on their souls) that died at Turloughmore.

It is on the first of August, the truth I will declare, Those people they assembled that day all at the fair; But little was their notion what evil was in store, All by the bloody Peelers at the fair of Turloughmore.

Were you to see that dreadful sight, it would grieve your heart, I blew, To see the comely women and the men all lying low: God help their tender parents, they will never see them more; For cruel was their murder at the fair of Turloughmore.

It's for that base blood-thirsty crew, remark the words I say, The Lord he will reward them against the judgment-day; The blood they have taken innocent, for it they'll suffer sore, • And the treatment that they gave to us that day at Turloughmore.

The morning of their trial, as they stood up in the dock,

The words they spoke were feeling, the people round them flock: "I tell you Judge and Jury, the truth I- will declare,

• It was Drew that ordered us to fire that evening at the fair."