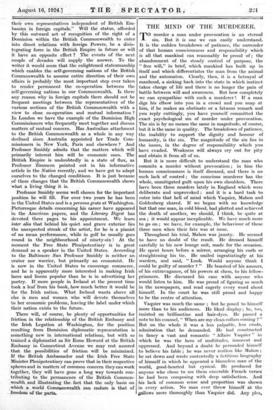 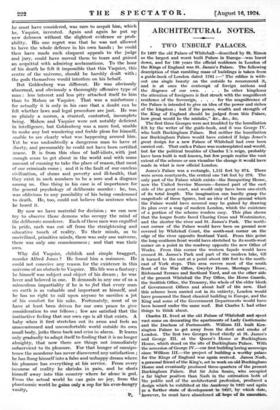 THE MIND OF , THE MURDERER.

TO murder a man under provocation is an eternal sin. But it is one we can easily understand. It is the sudden breakdown of patience, the surrender of that human consciousness and responsibility which is all that mankind can reasonably be proud of ; the abandonment of the steady control of purpose, the "free will," in brief, which mankind has built up in itself and which differentiates the man from the animal and the automaton. Clearly, then, it is a betrayal of manhood, a sinking back into the state in which instinct takes charge of life and there is no longer the pain of battle between will and awareness. But how completely we can sympathise with such a murderer ! If a man digs his elbow into you in a crowd and you snap at him, if he makes an obstinate or a fatuous remark and you reply cuttingly, you have yourself committed the exact psychological sin of murder under provocation. The sin is by no means the same in magnitude, of course, but it is the same in quality. The breakdown of patience, the inability to support the dignity and honour of humanity, is the sin. The magnitude of the sin lies in the issues, in the degree of responsibility which you have evaded. Weakness will always cry out for pity and obtain it from all of us.

But it is more difficult to understand the man who commits a murder without provocation ; in him the human consciousness is itself diseased, and there is no such lack of control ; the conscious murderer has the ' whole, unmitigated guilt upon his own shoulders. There have been three murders lately in England which were deliberate and unprovoked and it is a hard task to enter into that hell of mind which Vaquier, Mahon and Goldenberg shared. If we began with no knowledge but that one man; in cold -blood, had plotted and achieved the death of another, we should, I think, be quite at sea ; it would appear inexplicable. We have much more to go on ; we have, for example, the behaviour of these three men when their fate was at issue.

Throughout his trial, Mahon was jaunty. He seemed to have no doubt of the result. He dressed himself carefully in his new lounge suit, made for the occasion. He spent hours before a mirror, arranging his curls or straightening his tie. He smiled ingratiatingly at his warders, and said, "Look. Would anyone think I could be guilty of murder ? " He boasted of his amours, of his extravagance, of his powers at chess, to his fellow- prisoners. He discussed his case with anyone who would listen to him. He was proud of figuring so much in the newspapers, and read eagerly every word about himself. In the court he was still proud and happy to be the centre of attention.

Vaquier was much the same ; but he posed to himself more than to his audiences. He liked display; he, too, insisted on brilliantine and hair-dyes. He passed a note to his counsel, " When are my clean collars coming ? " But on the whole it was a less palpable, less crude, admiration that he demanded. He had constructed in fancy a vast and romantic " Affaire Vaquier" in which he was the hero of multitudes, innocent and oppressed. And beyond a doubt he persuaded himself to believe his fable ; he was never restless like Mahon ; he sat down and wrote contentedly a fictitious biography of himself in which he appeared a blameless man of the world, good-hearted but cynical. He produced for anyone who chose to see them execrable French verses' he had been composing with deep satisfaction. And his lack of common sense and proportion was shown in every action. No man ever threw himself at the gallows more thoroughly than Vaquier did. Any plea, he must have considered, was sure to acquit him, which he, Vaquier, invented. Again and again he put up new defences without the slightest evidence or prob- ability. His one regret was that he was not allowed to have the whole defence in his own hands ; he could then have made such eloquent appeals to the judge and jury, could have moved them to tears and gained an acquittal with admiring acclamations. To the hour of his death he felt it impossible that this Vaquier, this centre of the universe, should be harshly dealt with ; the gods themselves would interfere on his behalf.

But Goldenberg was different. He was obviously -abnormal, and obviously a thoroughly offensive type of man : less interest and less pity attached itself to him -than to Mahon or Vaquier. That was a misfortune ; for actually it is only in his case that a doubt can be felt whether laws and legal procedure are just. He was so plainly a moron, a stunted, contorted, incomplete being. Mahon and Vaquier were not notably deficient in intelligence, but Goldenberg was a mere fool, unable to make any but wandering and feeble pleas for himself, ' unable to see clearly what was happening around him. , Yet he was undoubtedly a dangerous man to have at liberty, and presumably he could not have been certified insane. It is from this class of half-idiots, with just enough sense to get about in the world and with -some amount of cunning to take the place of reason, that most of our criminals come ; and it is the fault of our careless i civilization, of slums and poverty and ill-health, that : they exist in such numbers to be a sore and a disgrace among us. One thing in his case is of importance for the general psychology of deliberate murder : he, too, was oblivious to any possibility of his 'being condemned to death. He, too, could not believe the sentence -when he heard it.

By now we have material for decision ; we can now try to observe those demons who occupy the mind of the deliberate murderer. Each of these men was engulfed in pride, each was cut off from the straightening and educative touch of reality. To their minds, as to uncivilized, primitive minds, there was only one universe, there was only one consciousness ; and that was their own.

Why did Vaquier, childish and simple braggart, murder Alfred Jones ? He found him a nuisance. He could not conceive any reason for the existence in this universe of an obstacle to Vaquier. His life was a fantasy; he himself was subject and object of his dream ; he was lover and beloved in one. It demands in any one of us a miraculous impartiality if he is -to feel that every man on earth is as valuable and important as himself, and he has no right to call upon anyone to sacrifice a jot of his comfort for his sake. Fortunately, most of us have at least "been driven for our own peace to give consideration to our fellows ; few are satisfied that the instinctive feeling that -our own ego is all that exists. A baby when it first stretches out its arms and feels an unaccustomed and uncomfortable world outside its own small body, jerks them hack and cries in alarm. It learns only gradually to adapt itself to finding that it is no longer almighty, that now there are things not immediately subservient to its pleasure. For that hunger of omnipo- tence the murderer has never discovered any satisfaction ; he has flung himself into a false and unhappy-dream where his pleasure has everything at his service. From every incourse of reality he shrinks in pain, and he shuts himself away into this -country where he alone is god. From the actual world he can gain no joy, from the phantasmic world he gains only a sop for his ever-hungry vanity,